For my very first con, I decided to take things easy. I didn’t want to try to see everything and then get disappointed when I inevitably couldn’t see something, so I made it a point to relax. That being said, I still over-packed my schedule the first official day.

I was up at 6am that first day, mainly because I decided to do a Doctor Who look. Not a cosplay, just a look. So I woke up early to do my hair (having hair that falls below your butt sucks) and get ready for the day. My Doctor Who look consisted of a Victorian-era hairstyle, black tank, blue skirt, Doctor Who suspenders, and galaxy leggings. So, something I would wear on the daily, but definitely worthy of my first SDCC. 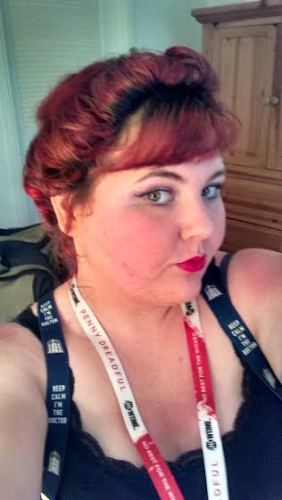 I was off to catch the shuttle before 9am, but oh goodness, that line. Seriously, the shuttle lines are super long during the regular hours. The shuttles were supposed to come every 15 minutes, but we usually had three shuttles back to back and then the last shuttle calling in for more to come. It’s okay though, that’s why you leave at nine for a convention day that doesn’t open until ten.

I got off the shuttle at 9:45 and had plenty of time to make my way into the main convention hall, up the stairs, and to my first panel of the day! It might have been my favorite panel. It was a panel of women young adult (YA) novel writers talking about how how Buffy influenced their lives and careers, along with the model of the teenage heroine. My first panel was a Buffy panel, and I was so happy. The best part though was, although everyone was clearly a Buffy fan, the panelists weren’t afraid to critique the show. So, instead of just fangirling out about Buffy, the panel was a worthwhile discussion on the advancement of feminism and diversification in television and books.

I had to leave early because my friends wanted to meet for dinner before we went out. We met at the Geek Chic XP lounge at the Horton Grand and had a wonderful meal in a beautiful hotel from the 1920s. It was really lovely, and only a little ways from our next adventure!

So the main part of my day was in panels, with brief breaks for the bathroom and to buy ridiculously expensive food at cash only stations (this is why being prepared and planning ahead are so important). However, my night was spent at one of those extra events that aren’t officially part of SDCC, but always pop up around it. I went to the Supernatural fan party, “Carry on My Wayward Cocktails!” My wonderful friend bought me a ticket for my birthday and we all went to have fun. The food was themed (two kinds of pie, thank Dean), the drinks were themed (Demon’s Blood was particularly good), there were Supernatural music videos, and Curtis Armstrong (Metatron) stopped by! 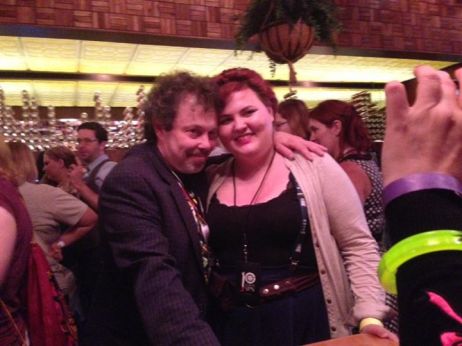 The party was wonderful, not only for everything above, but because of the people there. All were Supernatural fans, nice to each other, and just people I would love to talk to regularly. There were people from Tumblr and the Harry Potter Alliance who I particularly enjoyed talking to and who I hope to do more things with in the future. Plus, did I mention the pie?

We stayed until the party ended, were sad to go, and as I split from my friends (they were going to another party, I was headed back to my hotel) I was still pretty energized from the day. As I walked to the shuttle pick up (different spot after 10pm, FYI) I ran into one of my friends from high school. We rarely see each other and aren’t great about staying in touch, but they’re an awesome person, so it was great to just randomly see them on the street. They’d been attending the IGN party while I was at the Supernatural one, so we took a picture because coincidences are fun!

After that, I was basically ready to head back to my hotel. I caught the shuttle, didn’t get lost while walking around the hotel in the middle of the night (unlike on Wednesday), and even managed to converse with my roomie as we both planned our schedules for Friday. Friday was going to be a huge day for both of us, so we made sure to get to sleep early so we’d have time for all the fun! And that was the end of my day two. Stay tuned for day three!