Mere days before Episode 3 of DC Universe’s Doom Patrol premiered, a group of journalists got to screen it and talk to Matt Bomer afterwords. The questions ranged in topic, but one thing we all had interest in was the rich complication of his character, Larry Trainor aka Negative Man. Funnily enough, that’s exactly what interested Bomer in the part as well.

For those unfamiliar, this take on Trainor is a test pilot in the 1960s who has a great Air Force career, a beautiful wife and kids, and a secret he keeps in the closet. “He’s a guy who is this golden boy on the outside but inside has always felt like a monster,” said Bomer. “It’s the great allegory of the role that Jeremy [Carver] so brilliantly came up with – that ultimately, through this accident, he becomes what he always felt he was inside. His journey over the course of this season is finding a dialogue with himself where he can learn to accept all the parts of himself that he felt were unlovable or unacceptable in the past.”

The dichotomies and depth of Negative Man, plus the visibility he represents, is what attracted him to the part. “I think it’s a big reason why I wanted to be a part of Doom Patrol,” Bomer admitted, “because I’d never really seen a gay male superhero. What I love most about the character is that even though it’s a huge struggle internally for him, it’s not the sole thing that defines who he is. He’s such a multifaceted character. If it had just been one stereotypical thing, I think I would have had more reservations about it. The fact that he is this nuanced character who has so many places to grow and he has so much shadow and light that he doesn’t even know he has, that’s what appealed to me just as much as the sexuality.” 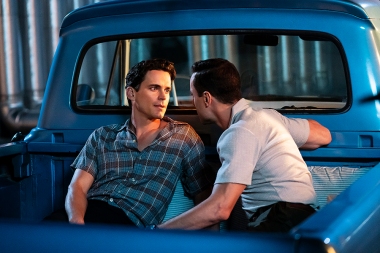 After years of almost getting cast in live action adaptations, Bomer finally got the right part at the right time.”I have to say, I’m so happy that this is where it all landed. I love Larry. I love who he is. I love who he’s going to become. I love who he’s in the process of becoming. People always would say, ‘Oh, what about Superman?’ They bring it up to me constantly still and I think this character, to me, is just as, if not more, interesting than Kal-El. I’m really, really happy with where it landed. I think Jeremy Carver is a brilliant writer. I’m constantly surprised by the writers in this project, but also by the scope of their ambition and the fact that these production designers and special effects teams are able to make this happen week to week. This is such a huge operation. I had no idea when I signed on just how vast it is. I got onto the set first day when they built an X-15 for me to fly in and I thought, holy sh-t, they’re really putting it all into this. I’m so happy to be in the DC Universe still after all these years and I’m so happy with the role that I landed in in the DC Universe.”