I’ve previously reviewed Sorcery! Part 1, Part 2, and Part 3, all for iOS (also available for Android and Kindle devices). The games have finally arrived on Steam for those of you who like playing on a bigger screen! Sorcery! Parts 1 & 2 releases today, Part 3 is coming in spring 2016, and Part 4 will release cross-platform later this year. I’m SUPER excited for Part 4, so when I found out that the PC version was coming out, I had to review it for newcomers – and I’ll honestly take any excuse to play these fantastic games again. Watch the trailer:

In this review, I’m going to focus on differences between the PC version and the mobile version (specifically iOS, since that’s what I experienced it on). If you want a more in-depth look at each individual game, please check my previous reviews. 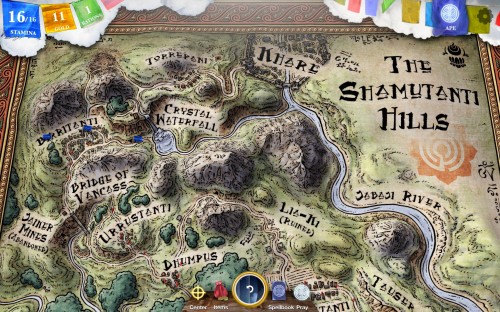 “You are an aspiring hero on a quest to recover the stolen Crown of Kings. The journey begins in the Shamutanti Hills, a treacherous landscape peppered with monsters, magic, and traps to snare the unwary. But those hills are a cakewalk compared to the twisted city of Kharé, where restless citizens, crazed Nobles and a brutal goblin army are about to come to blows. And even if you do survive, the far gate into the wastelands will only open for those who manage to uncover Kharé’s most ancient secrets…”

You’re able to pick between parts one and two on the main screen, and it will ask if you want to play in fullscreen or windowed mode the first time you play; you can change this in the in-game menu if you need to. You can import your end-game saves from mobile versions to the PC version and vis versa with the cloud save function (you get a six-letter code at the end of each game), which is an awesome thing. When you’re playing the PC version, you’ll automatically transition between part one and part two.

It’s REALLY wonderful to see the artwork on a bigger screen. Unfortunately, there doesn’t seem to be screenshot support as of yet. The controls have changed slightly to accommodate a mouse instead of touch, but oddly the tutorial at the beginning still uses ‘tap’ in a couple of places. I’m sure if you’re using a tablet it’s fine, but it sticks out using a regular mouse. When the dialogue gets long, you can either use the mouse wheel to scroll or click and drag. You can zoom into and out of the map with the mouse wheel, but it seems backwards and you can’t change this in the menu. The sound is mixed a bit low during part one compared to what I remember the sound on the iPhone being, but this is fixed by part two. There are a couple of graphical glitches, like the combat text being awkwardly hidden behind the fighters (fixable if you drag it, but a bit annoying), and a broken dialogue box when your opponent wins a hand in Swindlestones. Overall, however, these few quirks don’t ruin the experience, and I found myself just as sucked in as when I played the first (and second…) time on mobile.

I would say picking between the two versions is based largely on personal preference. Since I’m so used to the mobile versions and their fluid touch controls, I think I’ll lean that way for the fourth installment (they even look good on a smaller iPhone!). If you want a bigger screen, you can’t go wrong with the PC version. It’s also nice that the two parts are bundled together, since part one is quite a bit shorter than part two, which is humongous. No matter where you play these games, they’re amazing, and I’m glad they’re available for an even bigger audience with their desktop release. Get this if you love detailed fantasy, gamebooks, excellent writing, and a wonderful adventure.