Steve Jackson’s Sorcery Part 3: The Seven Serpents is finally here! I absolutely loved Part 1 and Part 2 and was eager to continue my adventures. I replayed both parts before I started this new chapter, and I’m glad that I did; not only to refresh my memory, but because they’re both amazing games. Inkle Studios also brought us 80 Days and Down Among the Dead Men. I played Sorcery 3 on my iPhone 5C. Watch the trailer: 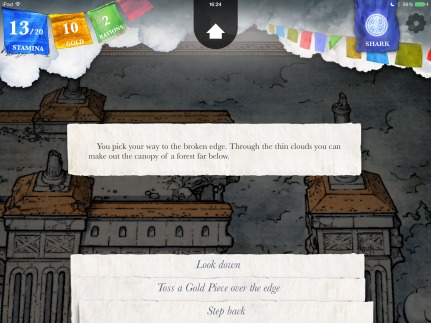 “Spun off from the Steve Jackson’s Sorcery! gamebooks of the 1980s, Sorcery! 3 is a narrative game with a massively branching, choice-driven storyline. With the city of Kharé at your back and the sacred Crown of Kings driving you forward, this penultimate chapter provides the most challenge yet as you attempt to cross the cruel, cursed wasteland of Kakhabad. With rations dwindling and seven deadly serpents stalking you around the desert, only the most resourceful adventurers will survive. And with no set path to follow and time rippling like a flag on the wind, this adventure could lead you in circles or a thousand years into the past.”

Sorcery 1! was fairly linear; you didn’t have a lot of choice on where to go in the grand scheme of things, even though there were a lot of different permutations. Sorcery 2! opened up the game world a LOT more in practice, but could become a bit tedious; if you didn’t do everything perfectly the first time, you would have to travel back in time and replay parts of the game in order to succeed (well, without being cursed, anyway). Luckily, that isn’t the case here. Pretty early on in the game, you get a letter that warns you about the titular Seven Serpents who have been sent to tattle on you to the Archmage. This letter also tells you to find Shadrack the Hermit. Soon, after learning more about the Serpents, they will appear on the map, hunting you. This third installment opens the map up even more, and you might hesitate a bit on which direction to go; it’s not a linear path like the first one by any means. My strategy was to head toward promising landmarks and to explore as much as I could. Another aspect that complicates things is beacons that somehow affect time. Sweeping their light across the map allows you to experience what the barren wasteland used to be. This is more enjoyable than Sorcery 2!‘s time mechanic. 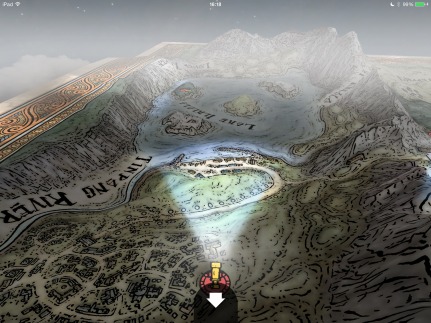 I’ve always been a huge fan of the graphics in the Sorcery games, especially the maps (which is what you’ll be looking at most of the time), and this one is no different. The maps and landscape seem even more detailed this time around, as in the screenshot above; there’s a lot more depth and 3D-ness to it. You can now buy the maps from the Inkle website, which is something I’m very seriously considering! Sometimes, the larger map will zoom in to a more detailed map, like when you approach a wizard’s hut, for instance. The details on these maps are astounding. All of the creature and character art is wonderful too. A small, neat change that was made is that now, your avatar will change to reflect its status, like falling or climbing. The composer is Laurence Chapman, who also scored 80 Days, and he’s done a phenomenal job. You can listen to and download the extended theme here for free. The ambient sound is really well-designed too; it changes based on where you are and what’s going on around you. Wind howls, birds chirp, fires crackle, etc. It’s very effective at drawing you into a mostly text-based story.

There’s nothing major added here that wasn’t in the first two games. Swindlestones was added in the first game, and you can continue playing that here. There have been a few interface changes that I really like: in the first games, you had to select which location node you wanted to return to from the map; now, you tap the timeline button in the middle of the menu, which will allow you to turn back a clock hand if you want to rewind. I’ve always really enjoyed the rewind feature of these games (which is also present at the end of every fight); if you make a grave mistake, it doesn’t matter if you don’t want it to. You can control your own difficulty level. And if you die, you don’t have to start all over, thank goodness. You also get a summary of your day every time you sleep, which is nice.

A small interface complaint that I’ve had since the first one that persists here is flipping through the spellbook; there’s thirty spells and no table of contents, so it can get a bit annoying to find spells you want. This isn’t gamebreaking, however.

Reminder: if you want to create your own inkle games and stories, you can here.

You should get the Sorcery! games for their rich storytelling, gorgeous art, and the number of choices offered. They’re worth every penny. Sorcery 3! has been my favorite so far, and I can’t wait for the exciting conclusion!

You can get Sorcery Part 3 on the App Store [Requires iOS 7.0 or later. Compatible with iPhone, iPad, and iPod touch. This app is optimized for iPhone 5, iPhone 6, and iPhone 6 Plus. 312 megabytes. 12+] and Google Play [266 megabytes, requires Android 2.3 and up, low maturity] for $4.99. Check out Inkle’s official site, like them on Facebook, and follow them on Twitter.