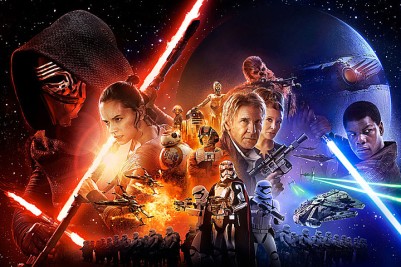 With ticket pre-sales going through the roof for Star Wars: Episode VII: The Force Awakens, due to hit theaters on December 18th, this seemed like the perfect time to take a look back at some of the most iconic characters of the franchise – especially since we’ll be seeing some of these same characters reprise their roles in the new film. So, without further ado, I present my personal top ten list of the best Star Wars characters ever.

Farm boy turned galactic hero, Luke is the character in the original trilogy who all others revolve around in some form – the link to both the gradually revealed family ties and to the Force. While tempted several times throughout the original trilogy, Luke never turned to the dark side of the Force, unlike his unfortunate father Anakin Skywalker, aka Darth Vader.

Although Luke may be our main hero, his twin sister Leia is possibly the only significant female character in the Star Wars series. She’s most likely to get the job done quickly and efficiently. Separated at birth from her twin, Leia was raised as royalty, with the all the influence and money that comes with it – both of which she uses to become one of the great leaders of the Rebel Alliance.

The pilot of the Millennium Falcon, Solo brought much needed levity, cynicism, and sarcasm to the original trilogy. He was the one factor throughout that kept the story from getting too lofty, mainly by deflating it with a well-placed comment about hokey religious nonsense or a well-timed blaster shot. Here’s hoping that cockiness hasn’t dimmed with his return in The Force Awakens. Additionally, the character will be getting his own film scheduled for a 2018 release date with many notable actors having already auditioned for the role, including Dave Franco, Logan Lerman, and Chandler Riggs.

Wookie, co-pilot of the Millennium Falcon, and loyal friend to Han Solo, Chewie manages to convey a wide range of emotions while never uttering a word that anyone other than Han can understand. Not only handy with a blaster, but also as good a pilot as Han (if not better), and a quick-tempered but loyal friend. Recently, the iconic character received his own comic book miniseries written by Gerry Duggan with art by Phil Noto.

Modeled to resemble a human, filmmakers have managed to create a robot who is more human in more ways than a lot of humans are. With the prissy English butler style down to a science, this android provides both comic relief through his banter with fellow droid R2D2 and a helping hand when it’s needed most.

The other half of the droid team of helpers in both the original and the prequel trilogies, R2 is invaluable both as initial messenger to Obi-Wan and as tech-savvy savior to our main trio. While he never speaks in English, the tone of his clicks and beeps leaves little doubt as to his attitude throughout the franchise. Both C3PO and R2D2 can also be seen in Lego Star Wars: Droid Tales on cable TV (click for details).

Proof that power, or in this case the Force, can come in small and unconventional packages, Yoda is the Force master and trainer of Jedi warriors. Uttering his wisdom in backward and turned around speech patterns at the ripe old age of 900 years old, he helps Luke realize his full Force potential.

Cut from the same cloth as Han Solo, Lando is a charming scoundrel. This is evident within moments of meeting him when he tried to put the moves on Leia while greeting his old buddy Han. He then sells out Han to Jabba the Hutt to save a city. Granted, he redeems himself when he finds out he’s been double-crossed, ultimately taking out the second Death Star. Lando is another character with a comic book spin-off series by Charles Soule, which takes a look at his gambling and smuggling days before he joined the Rebel Alliance.

Where else but Star Wars would you find a mafia-boss level bad guy who also happens to resemble a giant slug? One of the great villains of the franchise, he not only puts Han Solo on ice, (or carbonite to be exact) he also briefly enslaves Leia, much to his own detriment. Jabba is the kind of character you love to hate, with his disturbing can’t-look-away appearance and heinous values. However, his love for subjugation ultimately cost him his life as Leia kills her captor with the very chains she was cuffed to.

Last but not least, the ultimate Star Wars villain, who outshines even his predecessors and superiors in being the one villain who no discussion of the Star Wars universe would be complete without mentioning. Former Jedi turned to the dark side, creator of the Death Starsm and father to Luke and Leia, no other sci-fi villain even comes close.

While there are many others worth mentioning both within and outside of the original and prequel film trilogies, these are the most iconic and best remembered from the films. Going forward, I’m fairly confident that this list will expand when we get to know the potential great new characters coming when The Force Awakens in theaters.