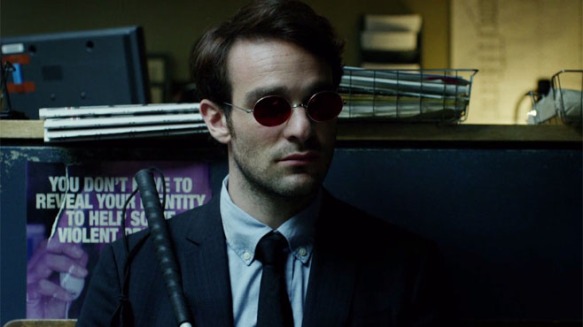 Before I begin, am I the only one who keeps seeing a resemblance to Nolan’s Batman in this series? I’m not complaining, I just realize that this is the the third time I’ve made reference to Batman in my reviews. The title of episode five and a certain scene had me hearing Alfred in my head. Of course, every time people are told not to say Fisk’s name, all I can think of is Voldemort. Maybe I just need to spend more time outside of fandoms.

Claire and Daredevil (well, Matt, really) are becoming closer. He explains his superhuman senses, like how he knows she’s bleeding when he smells copper in the air or how he can diagnose the degree of an injury by one’s breath sounds. Things start to heat up between the two, only to fizzle out as Claire considers whether she can accept the darker parts of Daredevil. I’m not sure where this is going to go, but if Claire isn’t around to clean up Daredevil after his beat-downs, he’s going to need someone to fill that role.

I have to say, I really love when Foggy and Matt have a scene together. The two of them, along with Karen, have solid chemistry, and are a much welcome bright spot in what are often dark and violent plotlines. The lawyers take on a new client, an elderly woman being forced out of her home by developers.

Foggy takes the lead on this case and shows us just how big his heart is. My instinct is still to think he’s going to be a rat, but then he does incredibly kind things. He reminds me of Jack Black, if Jack Black never annoyed me. Think Jack Black in The Holiday, not in anything else he’s been in. And Foggy’s legal skills? Yeah, I’d totally hire him in a heartbeat.

In the midst of this case, Foggy volunteers to help the elderly lady with some much-needed repairs in her apartment, and ends up on an impromptu date with Karen. By the end of the date, things get explosive.

Romance is also in the air for bachelor Fisk. Vanessa grants him a second date, and he brings his A-game. He insists he won’t lie to her. Swoon. He talks to her about the city, saying he wants to “carve something beautiful out of its ugliness, set free its potential.” I’d totally give him a rose. Vanessa apparently agrees, admitting she knows he’s dangerous, but is still interested. Fisk goes on to tell her that the safest place she could ever be is by his side and treats her to a stunning light show. By now, I’ve forgotten the whole car incident from episode four and eagerly want to go home with Fisk. I’d ask him to slow dance to this, and he could tell me more about his father’s old cufflinks.

This wasn’t just an episode of Love Connection: Daredevil Edition. Trust me, there was plenty of bone crushing and punching. I was expecting all hell to break loose in this episode, and I wasn’t let down. The Russians are led to believe that Daredevil is responsible for what has happened to Vladimir’s brother. This sends Vladimir off the deep end, and he declares war, grenades and all. He also places a million dollar bounty on the head of someone he feels has betrayed him. Vlad is one passionate loose cannon.

Daredevil has made it clear he’s not a member of the NRA. He prefers to ditch the magazine and use the gun itself as a projectile. Works quite well, by the way. It’s become nothing short of a delight to watch Daredevil beat the living daylight out of the bad guys. We also see Daredevil become an even bigger enemy of the cops. I guess this could be seen as a spoiler if you’ve never seen a movie or show based off a comic book, so my apologies, but, the cops here are dirty, dirty, dirty. Shocking, eh?

Episode five gives us our first true cliffhanger. Thanks to technology, I don’t have to wait a week to find out what happens. I’m off to watch it now.

Binge along with me! Daredevil is streaming now on Netflix.