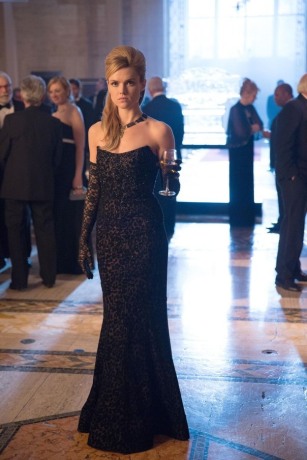 Previously on Gotham, there’s a serial killer on the loose nicknamed The Ogre; he’s got a penchant for luring women to his home under the guise of a date, then when they aren’t the PERFECT match, he tortures and murders them. Oswald is planning to kill Maroni. Fish escaped the Dollmaker’s island. Gordon was set up by Commissioner Loeb so that The Ogre would go after his family, and now Lee AND Barbara might be in danger!

That was the WORST cliffhanger last week, eh? This has definitely been the episode I’ve been anticipating the most. At the beginning, Bruce is inexplicably wandering around the city of Gotham at night, and the only thing that saves his butt is Selina coming along with a knife. Bruce is horrified that Selina killed Payne, but Selina points out that he would have run back and told his boss about Bruce and Selina getting the information out of him.

Lee is in the bathtub when she hears suspicious noises, so she quickly springs out of the tub, grabs a knife, and sees two missed calls from Jim; luckily, it’s just a stray cat. She beans Jim with the phone when he accidentally sneaks up on her (does he have a key to her apartment?), and he explains the situation to her, asking her to leave Gotham. She refuses, saying, “if you want to protect me, catch him. I’m going to stay here and do my job.” And then he tells her he loves her! Poor Barbara.

Speaking of Barbara, she’s brought The Ogre back to her apartment OH NO. She was ready to sleep with him (I think) until he assumed she had a boyfriend AND was the type to cheat on him. Then she kicks him out. Oswald’s mom kisses him on the mouth, bringing us back to that super uncomfortable bathtub scene from earlier in the season. Bruce reveals that he’s invited Selina to the Wayne Enterprises charity ball, which makes Alfred promise to stay out in the car, which I think is a bad idea. Also, I’m pretty sure this happened in Batman Returns, so that’s a nice callback.

The Ogre gives Jim a warning call, telling him that he’s on a dangerous trail and to cut it out before he kills someone Jim loves. Jim responds to this by holding a press conference about how he’s determined to catch him, presumably to draw him out? Lee seems to be on a plan of some kind. Maroni and Oswald’s mom are getting cozy, which is HILARIOUS. Bruce and Selina at the ball is the cutest thing EVER; Bruce tells Selina to smile, which probably set her on the path to villainy. Bruce is really bad at being subtle, and they have an argument about the killing of Payne again. We learn that The Ogre has had extensive plastic surgery and that his mom didn’t love him because of a facial deformity.

Maroni reveals to Oswald’s mother that Oswald has been killing a bunch of people. Barbara and The Ogre are having a reconciling date at the charity ball, and he reveals his issues with his mother, which might be a poor choice for a second date, but okay. He thinks that they have a lot in common, because they both were told that they’d never be loved. He whispers something in her ear that intrigues her.

About Kitty: [content warning for domestic abuse] Edward sees bruises on Kitty’s arms and asks her about them; she says that they’re her fault, that she said things she shouldn’t have said. Edward confronts her boyfriend, who basically tells him to fuck off. Edward waits for the boyfriend to come home at night, then tells him that he needs to leave Gotham, tonight. The boyfriend knees him in the gut, and Edward stabs him, at first horrified with himself but then something comes over him and he stabs him multiple times. He snaps out of it and is, again, horrified. I know that I’ve complained about Edward’s Nice Guy Syndrome before, and I really appreciate that he took (drastic) steps to get her out of an abusive situation, but I worry that this will make him feel more entitled to Kitty than he already does.

ANOTHER CLIFFHANGER WHAT A SURPRISE. Only two episodes left! Next week: The Anvil or the Hammer at 8pm on FOX.

One thought on “Spoiler-Free Review: Gotham: Episode 20: Under the Knife”