Spoiler-Free Review: Gotham: Episode 21: The Anvil or the Hammer 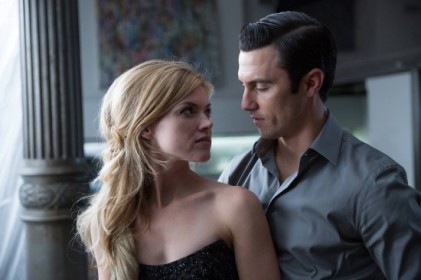 Content warning: parts of this episode and discussion could be potentially triggering for abuse victims.

Previously on Gotham, The Ogre threatened someone Jim loves, Bruce and Selina attended the Wayne Enterprises Charity Ball, Oswald wants to kill Maroni (especially because Maroni told his mother that he was a stone-cold killer), Edward redeemed himself a little bit and then murdered Kristin’s abusive boyfriend (which may trigger his full-fledged Riddler transformation), and The Ogre was revealed to be a previously-disfigured man (Jason Skolimsky) with mommy issues who has had extensive plastic surgery. This is why no one suspected him. Jim finally realized that Barbara was his next target while The Ogre showed Barbara his torture room. They shared a meaningful glance at the end of the episode. Here we go!

We learn that Barbara and The Ogre only actually slept for an hour last night (ayyy) and then in the morning, he tries to get her to stay. He confesses to her that he was going to kill her the night he met her, but changed his mind when he got to know her; she’s the perfect woman. She, understandably, makes a run for it, and then he throws a bag over her head. Jim feels super guilty about not thinking about Barbara being in danger, and Lee’s all like, “Do you blame yourself for falling out of love?” I don’t think that’s quite what he feels guilty about…

Jim and Harvey interrogate a random guy, learning that they need to go to the Foxglove Brothel to get more information. Cut to The Ogre’s soundproof apartment, where Barbara is tied up in the torture room, under his control. I’m so scared for her. Alfred learns of Payne’s death and is suspicious that he “fell out a window.” Jim sends Harvey to be an undercover John at the Foxglove to get some information. The Ogre shows Barbara his collection of dead women photographs, and she faints. One of the Wayne Enterprises higher ups catches Bruce sneaking around in his office. Edward is struggling to conceal his murder of Tom, and Kristin almost catches him in the middle of that.

Oswald’s planted guns somewhere so that Maroni can get murdered. Harvey infiltrates the brothel, seeing quite a few interesting things going on, including one we DON’T see but that gets Harvey so upset that he pulls out his badge. The Ogre continues to be REALLY HORRIFYING toward Barbara. The assassination attempt on Maroni fails, and Maroni kills the hitman to send a message to Oswald. We learn that it was all a ruse to get out from Falcone’s thumb in some way, and to piss off Maroni. What’s his plan? Flash cut to Edward talking to Tom’s skull and then destroying it, oh boy. Basically everything else I could say is a massive spoiler, so I’ll save it for next week, but suffice it to say, the finale is going to be amazing.

Next week, the season finale: All Happy Families are Alike at 8pm on FOX.

One thought on “Spoiler-Free Review: Gotham: Episode 21: The Anvil or the Hammer”