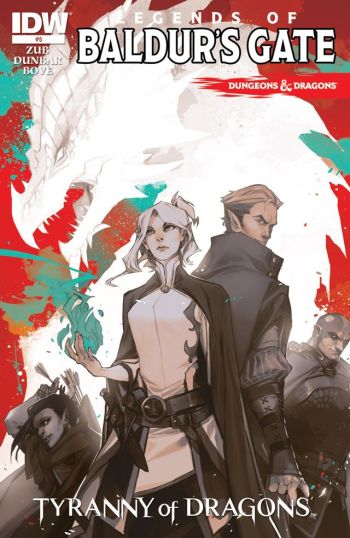 The story so far: “In the legendary city of Baldur’s Gate, a young moon elf (and wild mage) named Delina teams with the newly revived ranger Minsc; his hamster, Boo; and thieves Krydle and and Shandie. The group tracks down Delina’s missing brother, Deniak – who reveals himself to be a member of a Dragon Cult…before transforming into a red dragon!”

“A dragon rampages through the streets of Baldur’s Gate, and the only thing standing between salvation and destruction is two thieves, a wild mage, a ranger and a miniature giant space hamster! Swords for everyone! It wouldn’t be Dungeons & Dragons without a dragon, now would it? Writer Jim Zub (Samurai Jack, Wayward) and artist Max Dunbar (Red Sonja) wrap up their first story arc of action-packed D&D adventure!”

The cover of this one breaks away from the established pattern, but it’s still super cool. The dragon is awesome, and the party is ready to do some “butt-kicking for goodness.” The second page of the issue has an AMAZING spread of the dragon flying over the city, with Delina, Minsc, and Boo clinging on for dear life. There’s other fantastic artwork throughout, including some impressive fireballs and sunsets. Krydle and Shandie are stuck on the ground and backstab two hobgoblins, realizing that they have no clue how to slay a dragon but that in order to have any chance, they need to get to higher ground. Minsc tries to stab him, but the weapon has no effect. The thieves get to the roof, and Shandie takes aim at Deniak, but the first arrow just bounces off the thick scales and the second, despite becoming lodged in his nose, only makes him snort.

Krydle throws the dragon’s flight off with use of a grappling hook, bringing him down into the streets of Baldur’s Gate, trapping him under debris. The way they bring him down for good is fantastic, especially for Baldur’s Gate fans (who I assume are the main audience for this series). The guards get there comically late to help, and the city rejoices. This issue marks the satisfying end of the arc, and I very much hope that the series continues – it ends on “The End?”

One thought on “Comic Review: Legends of Baldur’s Gate: Tyranny of Dragons #5”