The best thing for me this week was the return of Sleepy Hollow, as well as some awesome episodes from my favorite shows. Even better? Looking ahead at the next two weeks and seeing so many incredible premieres yet to come! Check out my #WatchedList rundown each week, and if I’m missing out on a brilliant show, please let me know.

I’m having a blast live-tweeting shows over on Twitter for Nerdy but Flirty. It’s been really great to chat with everyone during the shows. As I’ve said previously, I keep my tweets spoiler-free and hopefully entertaining. This week, come say hi while I’m tweeting Gotham and Doctor Who, as well as the premieres of iZombie (and catch up on last season with these reviews on Nerdy But Flirty from Sabrina!) and American Horror Story. It’s October, let’s get scared together!

A lot happened in this quick-moving episode. Barbara’s on the lam with The Joker, causing quite a number of headaches for Gordon. I have to say, this bad girl version of Barbara is starting to grow on me. Something terrible happens at Gordon’s police station, and we see the set-up for what’s to come for Gordon’s career.

At the same time, we see Bruce’s origin story truly begin. He’s coming into his own. The shift in power between him and Alfred starts to take shape. By the end of the episode, they’ve arranged an agreement. Speaking of Alfred, I’d only agree to have a drink with him if he promised not to ramble on about kipper.

Cameron Monaghan continues to impress as The Joker. He’s clearly drawing a lot from Heath Ledger’s Joker, something I approve of. I think Heath’s was the ultimate, so I love this. Whatever the Gotham creators are doing this season, I want them to keep doing!

So Wilmer Valderrama, huh? I’m just saying, this show has one hell of a sexy and diverse cast. There are more reasons than just that to give it a look. For example, contacts in the future do way more than just help you see clearly. The major bummer of this episode is that PUAs still exist in the future. Seeing Vega’s reactions to their nonsense was great though.

Vega has to hide the fact she’s working with Dash, one of the Precogs. Dash is on firmer ground, standing up for himself and feeling a purpose in working with Vega. His sister and brother grow increasingly unhappy with him, and that is going to become a bigger issue as time goes on.

Dash has seen 700 murders, something he feels numb about. He has a conversation with Vega about it; they’ve both seen so much violence, so have become nearly immune to it. They both wonder that if they catch a crime in time, will they feel better? Dash and Vega really become partners in this episode, even if no one else can know that.

This episode has more emotion, and it flowed better than the premiere. The final scene and other clues really have me excited over what’s to come. I feel like this season has  a lot of potential.

I was hoping for a more sci-fi or comic book style feel to this show, given the premise. Instead, it has more of a NCIS vibe. Nothing wrong with that, but it’s just not how I saw this show developing. After leaving Jane Doe in a stairwell and thinking that was a safe space (everyone knows stairwells aren’t safe, hello!), I was aggravated. And again, the way Jane Doe is portrayed really irks me. I don’t expect her to be an emotionless robot, but to have her running into the arms of a man? Bleh. There are other far less stale ways to show a character is multi-dimensional. A woman can be fierce and vulnerable without needing to cry on a dude’s shoulder. All I’m saying. I won’t be sticking with this show.

Want to see how Genghis Khan and a genetically targeted virus are connected? Give Limitless a look. The whole episode felt like a superhero show. The theme is outrageous and there’s humor sprinkled in as well as cool graphics. I’m a fan. I loved the use of comic strip dialogue bubbles. Oh, and this song will be playing in my head whenever I’m over someone or something.

Brian is now working for the FBI. There’s a hilarious James Bond fantasy sequence, and I find him to be a totally loveable, though often misguided, character. Working for the FBI is not quite as glamorous as Brian had hoped. He spends a lot of time sitting around, and all he wants is a badge and a gun. More great shots of him on NZT, solving two Rubik’s Cubes simultaneously and solving a math equation on a chalkboard with one hand while sketching with the other.

He continues to hone his crime-solving skills, which starts to warm up agents Boyle and Harris. There are, of course, more evil things at play. Each time Brian tries to do an internet search on Eddie Morra, his computer glitches. By the end of the episode, we see that Brian is in deep, and for now remains in the dark about why Eddie Morra was so keen on helping him avoid the negative side effects of NZT. 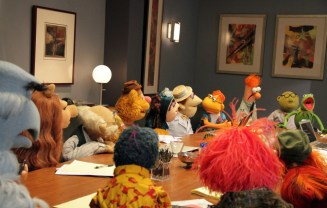 I caught up with the first two episodes of The Muppets. As someone who grew up on the show and movies, it was odd at first to see them less kid-friendly. But I loved it. Thirty minutes of total Muppet silliness. You can’t beat that. Hearing Kermit say that his life is “a bacon-wrapped hell on Earth” and Pepe the King Prawn explain that “gender is fluid” made my day. I won’t be giving reviews of this every week, but I wanted to include it today. If you’re in need of ridiculous fun in your life, this is the show to watch.

Heroes Reborn: “Under the Mask” 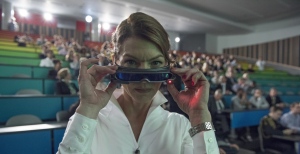 I think I liked this episode better than than the premiere episodes. There were, as I’d wished for, more super powers and fewer guns. Also, thankfully, Miko was not stuck in a video game! I feel a bit lost watching the show. It seems that Heroes is definitely a prerequisite at this point. I’ll watch a couple more episodes, but if I’m still scratching my head this much, I may just watch Heroes, then return to Heroes Reborn after.

In this episode, Noah and Quentin are trying to track down Molly, with a pit stop at a hospital where Noah learns something bad went down there a year ago. He has no recollection of it, but the security guards clearly remember something. Meanwhile, Molly has been kidnapped and a new technology, E.P.I.C., is a major threat to her and every Evo.

There were a lot of other stories happening simultaneously, of course. Miko gets her sword taken from her. There was a freaky regeneration scene while Miko is stuck at Renautas headquarters. Tommy is behaving like a typical teenager. Except, you know, one with a really cool super power. I doubt they make a parenting book about that. Tommy’s mom confronts the penny man. Something terrible happens toward the end, and we’ll have to see what happens next! Carlos continues the role of El Vengador – this continues to remind me of Daredevil. Major hottie Paul from Orphan Black makes an appearance as well. I’m sure I’m forgetting like three other plot lines…

The whole E.P.I.C. technology is really cool. I like the idea of the world turning its back on the heroes, and where the story can go from there. Again, I feel like I need the foundation of Heroes to fully appreciate it. I wish I knew the significance of Molly Walker and who she was, as well as Hiro Nakamura. But alas…

Also: was the Evo they found at the E.P.I.C. launch Jeff Winger?

Abbie in the FBI, Ichabod in jail, new haircuts for both, plus Betsy Ross and Pandora! And that was only a small taste of the season premiere of Sleepy Hollow! New showrunner Clifton Campbell has mentioned “fun” quite a bit in discussing this season, and he certainly didn’t disappoint in the premiere.

I love shifting the focus back to Abbie and Ichabod, and placing Jenny in a primary role as well. The premiere showed the audience how each of our beloved characters has grown, and it was nice to see this. When this show first began, I wondered how they’d continue beyond the headless horseman storyline. After being introduced to Pandora (and, yes, her box), I’m excited for this season! I also can’t wait to learn more about Betsy Ross. Sleepyheads rejoice!

Doctor Who: “Under the Lake”

The Doctor and Clara end up in an underwater base where crew members are being killed by these freaky-looking ghosts. Those hollow eyes! Movies and shows that take place underwater immediately crank up my fear. Throw in some ghosts, and yeah, I’m scared, though happily so. I’m a fan of ghosts (or ghost-like things!) showing up on Doctor Who—seems to always be a creepy good time!

This was a slower-paced episode, compared to the first two this season, and is a two-parter. I enjoyed being able to catch my breath with this one, and the guest stars brought a lot to this episode. As one who frequently speaks out for the need of diversity in media, I was particularly happy to see deaf actress Sophie Stone playing a deaf character using sign language in Doctor Who. More roles like this please, writers and casters!

I found the moments where it’s clear The Doctor is showing concern for Clara, and stating his role as protector, to be more emotional than I expected. I’ve never found the chemistry between Capaldi and Coleman to do much for me. But I feel like it’s growing a bit, and perhaps it’s that I’m reading into Clara’s demise and it makes me a bit sentimental. I don’t know, but it did seem more profound in this episode than it has been previously. “Under the Lake” reminded me a bit of “Silence in the Library,” another win for me. Part one was a fun adventure, and I look forward to its conclusion next week.