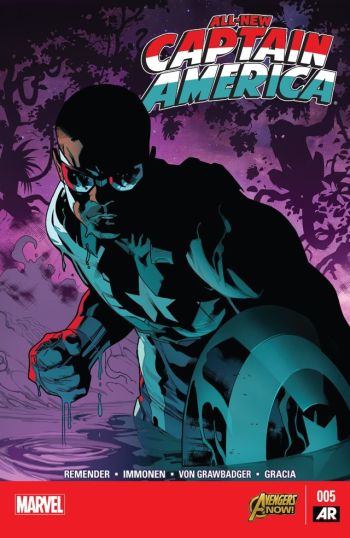 “So all we’re up against is a Nazi vampire spawned by Dracula himself?”

“The countdown to great leveling begins. Planet Hydra is all but assured. Captain America is our last hope.”

Previously, “HYDRA’s leaders had multiple plans in place to use the child’s blood as a bioweapon to sterilize populations of ‘undesireables.” Sam foiled two plots, but it was too late to stop Baron Zemo from sending the boy to dump a cloud of infected fleas over Florida!”

The beginning of the issue sees a father and son arguing about whether or not Sam deserves the title of Captain America; the father says that Sam was given the title to be “politically correct” and calls into question his credentials. His son is trying to convince him otherwise while Sam waits in line for coffee and overhears the whole thing. I feel like this conversation may have been based on real life people who were angry about the switch. That conversation is playing through Sam’s head as Zemo tries to kill him; his self-doubt is almost overwhelming. Zemo’s trying to psych him out too, but he shoves the hilt of the blade into Zemo, throwing him off balance. Sam escapes, hands bloodied to the bone, and realizes that the deadly mosquitoes have been released. Steve’s voice echoes through his head: “there’s always a solution.” Unfortunately, as he’s looking out, Sam lets his guard down long enough for Zemo to knock him on the back of the head. As Zemo beats him, Sam reaches out to what looks like every single bird in the area and asks them to eat the mosquitoes.

We see Lucas with the deadly blood flying the helicopter (or maybe a small plane?), gloating, and his motivations are suspect. Guess what’s not good for helicopters though? A HUGE FLOCK OF BIRDS. Falcon rescues him at the last minute for reasons that are not immediately clear. Meanwhile, Ian is seemingly back from the dead (comics) and is fighting Zemo while Taskmaster’s on the phone, currently at the end of Misty’s gun. Unfortunately, and of course, it’s not over yet – Ian found HYDRA’s contingency plan which involves a vampire. I kid you not. Then there’s also a guy named The Leaper helping out Baron Blood. I think the Leaper might be the saddest super villain name I’ve ever heard. Can Cap and Ian get rid of the Baron? We’ll find out in the next issue!

Written by: Rick Remender
Art by: Stuart Immonen
21 pages
Get it on Comixology, Marvel Digital, or at your local comic shop for $3.99.