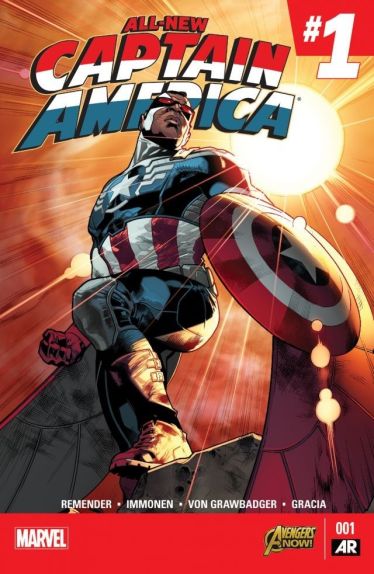 “This is it! The all-new, Spy-Fi, highflying adventures of Sam Wilson Captain America and Nomad begin here! Hydra is growing, the terrorist band have has infiltrated the Marvel Universe completely! But what is their ultimate goal?”

Much like the first issue of Thor, this is going to be my first issue of Captain America – ever! What a cool place to start. The recap of previous events is much shorter than it was in Thor #1, and there are way more pictures, but it still does a good job – there’s less here to sum up, it seems. I didn’t realize that Sam was an orphan, but it’s kind of par for the course in comics. The first page, while treading those well-worn orphan tracks, still managed to give me chills. This issue tasks Sam with rescuing a boy from the clutches of HYDRA, with the help of Nomad. Falcon’s Captain America suit is simply stunning, especially to see in action.

There’s quite a bit of humor in this, as (retirement age) Steve Rogers and Sam still get to interact, plus Sam has plenty of one-liners for the bad guys. This issue juxtaposes Sam’s thoughts about missing his parents with a raging action scene, which I thought was an interesting choice – I’ve always liked moments of introspection against a more lively scene. Batroc shows up – I thought I didn’t know who he was, but he’s in Captain America: The Winter Soldier (albeit looking pretty different than he does here). The artwork is excellent overall – less colorful than I was expecting, but interesting to look at with a lot of cool action panels. I’m not as instantly drawn in as I was with Thor, but I’ll continue with this series for at least a few more issues.

Also, he has a LITERAL pet falcon! Awesome.