Thanks to Skype, I had the chance to check out an early screening of Thor 2: The Dark World, directed by Alan Taylor.

Look at this 1980 movie poster with the woman all on the big strong man for support!

The film stars Chris Hemsworth as Thor, Natalie Portman as Jane Foster, Tom Hiddleston as Loki, Stellan Skarsgård as Dr. Erik Selvig, Idris Elba as Heimdall, Kat Dennings as that intern girl, Jaimie Alexander as Sif, Rene Russo as Frigga, Anthony Hopkins as Odin, and sheesh this is a long sentence let’s end it with Christopher Eccleston as Malekith, the main baddie. As you can see, this is a star-studded cast, and I think they all worked great for their characters. 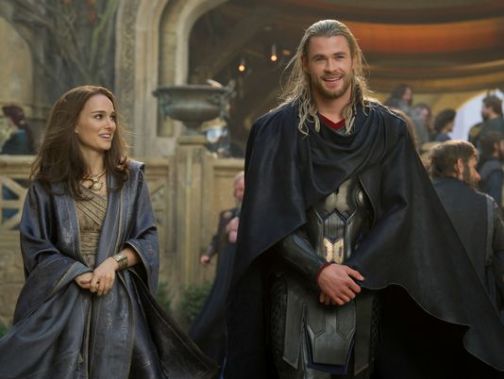 So, let’s get some things out of the way: I didn’t expect this movie to be very good. I enjoyed the first Thor immensely, but I also came into the first Thor knowing that it was going to have to find a balance between magic/silliness, and this obsession with realism that superhero movies have been all about lately. Personally, I’m a fan of deep fantasy, so Thor was one of my favorites out of the pre-Avengers films (the other was Captain America, a period piece).

It also doesn’t help when you hear that Joss Whedon was flown out to help at the last moment…that sounds like a bad movie is coming up, right?

WRONG! This movie was great fun, and I enjoyed every minute of it. Thor 2 had the right balance of fanservice, a fresh plot, awesome character interactions, and badass fight scenes. Was it perfect? No, but it was far closer than it had any right to be.

Can I take a moment to say that it’s 2013 and I was watching a major movie and the main bad guy was a DAGGONE DARK ELF. Like, legitimate, looked just like the ones on the backs of my fantasy books. I couldn’t stop grinning.

A lot of characters had slightly expanded roles this time around, and I was happy to see plenty of diversity in the characters. Heimdall got to show us once again what a badass he is, and he has one of the best scenes in the movie. 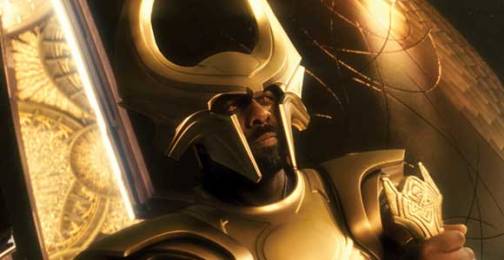 But by far, my favorite part of Thor 2: The Dark World is the character interactions. Loki and Thor are amazing together, Loki and his mother brought tears to my eyes, and Thor and Jane brought a rise to my blood pressure.

This movie is funny. Kat Dennings’s return was much deserved, and the film is full of lovely little moments of levity.

Thor 2: The Dark World is gorgeous. I want to get this movie on DVD so I can pause it and stare at it. Even the closing credits are beautiful works of art.

The visual effects were one of my favorite parts of the movie, with fascinating Viking/steampunk/heavy metal ship designs, buildingscapes, and worlds. Heck, I even liked just watching how the machine parts interacted!

While I did love that my villain was a dark elf, I hated how boring he was. Anytime a villain’s only drive is the need to destroy, he becomes an un-interesting villain. In fact, at times, Malekith and his army seemed merely an excuse for us to get more Thor and Loki. I was never curious about what he would do next; I did not hate him or like him. He was just there, plodding towards his goal of destruction.

There was also the strangeness of Odin being so mean about everything. I mean, why make Thor go through all of that to be a good person and then yell at him for being a good and honorable person? Odin tries to do all of the things that he yelled at Thor for doing in the first movie!

Speaking of Thor, I hate to see how Thor’s friends are so helpless without him. We’re immediately shown them fighting to stop a two-year war, and then Thor walks in and just resolves it immediately. I call this the DragonBall Z problem. It’s like, why even have the Z Fighters? They don’t ever accomplish anything!

Doesn’t she look badass? It’s all for show.

None of the main characters wore helmets. EVERYONE around them wore helmets, but no one who had a real role in the movie wore their helmet. It bugged the crap outta me.

Another issue I had was with the treatment of female characters. Now, this part is a spoiler, which I have clearly marked, so skip to FINAL VERDICT below to miss the spoiler.

The female characters this time around leave a bit to be desired. Sif is immediately shown to be incompetent and jealous, though it’s never truly explored, another female character dies (for real) and no time is given to mourn her, and Jane herself plays a much more helpless Princess role than normal, with her veins holding the prize the villain seeks. Although she does help to defeat Malekith, it isn’t explained how the device she’s using actually works, and she kind of makes the fight more difficult for everyone.

Also, let’s come back around to that female death. In both Thor movies put together, a lot of men “die,” but at the last moment are revealed to be alive. When this woman dies, she is so dead that her body is set on fire. Her death was also clearly intended as an emotional lever, but none of the characters’ grief over her death was actually explored. It was even stated: “I’m not here to mourn with you, I need your help,” which was just incredibly callous and strange for that character to say.

And back to Sif: really? A love triangle? Because every woman’s life needs to revolve around their love for a man. I KNOW that in mythology she’s his wife, and in the comics they date, but we don’t need her to be randomly jealous…she’s much cooler as a good friend. 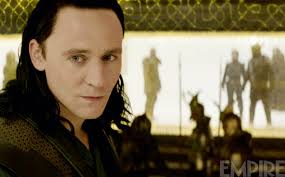 If you have a serious problem with sensical plot structures, this movie is not for you.

Just imagine: they could do this with Thor…how much more awesome is Winter Soldier going to be?!

And yes, there are two stingers at the end. You’re welcome.

4 thoughts on “Thor 2: The Dark World Review – Prepare to Squee!”