Review: Journey of a Roach, Cutest Cockroach Game Ever

A little while ago, I did a news article about Journey of a Roach and how excited I was to play it. The game has now been released! Brought to us by Koboldgames and Daedalic Entertainment, I had high expectations. Here’s the official trailer: 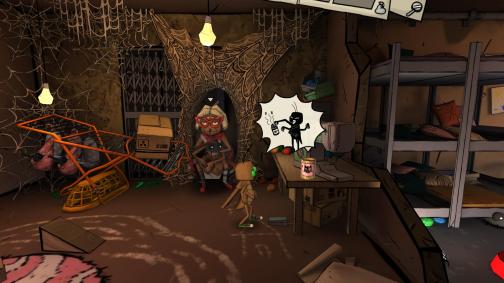 Nuclear war, post-apocalypse, barren and lifeless wastelands. Lifeless? Not so much! Mutated insects have made their home in a bomb shelter and they’re set on exploring the world. Let this point-and-click adventure welcome you to a hilariously bizarre end time world and join the roaches Jim and Bud on their journey to the surface.

You play the shorter one, Jim, because Bud has really bad luck throughout the entire game and keeps getting himself into trouble. The plot is pretty thin: rescue Bud and get to the surface so you can get to the flower that Jim sees. Along the way, you meet a lot of different bugs and a few other creatures.

These are the best parts of Journey of a Roach. Cutscenes are all done in the above comic book style, and the game itself is slightly cell-shaded. The character models are fluid and expressive, and pretty much everything is adorable. Environments are surprisingly varied, ranging from a science center to a nursery. There was always something interesting to look at, and they made cockroaches, spiders, bees, and ants pretty lovable and cute (not a sentence I ever thought I’d type…). There was also a nice visual nod to the Monkey Island series.

There is no speech in the game; everything is communicated visually, either through the environment or thought bubbles. Characters make little buglike vocalizations (the closest to English you’ll get is a “Tada!”), and the music score is really excellent. It changes from area to area, is generally plucky and upbeat, and there’s a couple of singing insects that add something different. 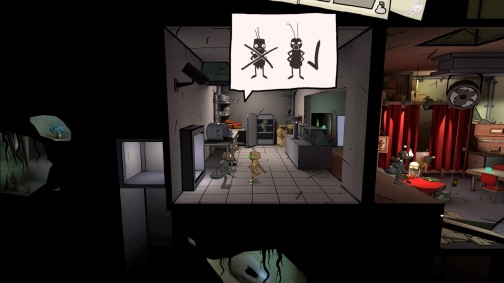 I opted for a mouse/keyboard configuration, although I think it would play well with a controller. Because you’re moving in a 3D, 360 degree space (cockroaches can climb walls!), you can’t just click to move; this is mapped to the arrow and/or WASD keys. The inventory is accessed by either scrolling the mouse wheel or clicking on the button for it, which is along the top of the screen. There aren’t a lot of inventory combination puzzles (which I found that I missed). There’s also a diary you can look at, which is actually a map with the ability to replay cutscenes and is honestly pretty pointless.

The main problem I have with Journey of a Roach is the obtuseness of the puzzles. In the beginning of the game, I was easily able to solve them, but then the difficulty went up a lot. For such a cutesy game, one that kids might be attracted to, I think the puzzles could have been much more logical. Example: at one point, you’re faced with a broken control panel for a crane. One of the buttons is missing, and Jim indicates that you need to repair it. The solution to that puzzle: jam a random mushroom that you find into the spot of the broken button. Really?! There’s also a timed sequence that kicks you back to the beginning if you fail, which annoyed me to no end, and a sequence that asks you to connect a beam of electricity that is much too finicky. On the plus side, there’s a hotspot button, so you’re never going to be pixel hunting for items to pick up.

Journey of a Roach took me three hours to complete, according to Steam, and that’s with using a video walkthrough when I was stuck. If you found the puzzles more logical than I did, you could probably finish in about two hours. The game offers 17 achievements through Steam (one of which, to finish the game in under 18 minutes, I cannot fathom). 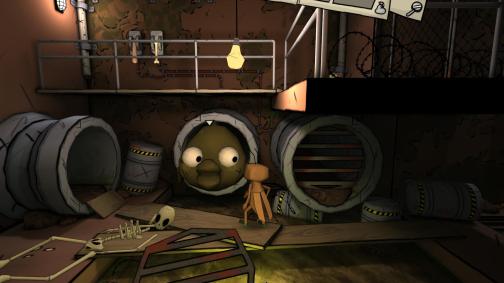 I really wanted to love this game; quite a few of my favorite games are adventures, and Daedalic has an excellent reputation. Instead, the short length and frustratingly illogical puzzles disappointed me. For adventure gamers who really want something new (or cute), but otherwise, this one can be skipped.

2 thoughts on “Review: Journey of a Roach, Cutest Cockroach Game Ever”