Akaneiro is from Dark Horse Comics and introduces us to the world of the free-to-play game Akaneiro: Demon Hunters by Spicy Horse Games. From the mind of American McGee, the comic and game is based on a story that twists together Red Riding Hood and Japanese folklore. 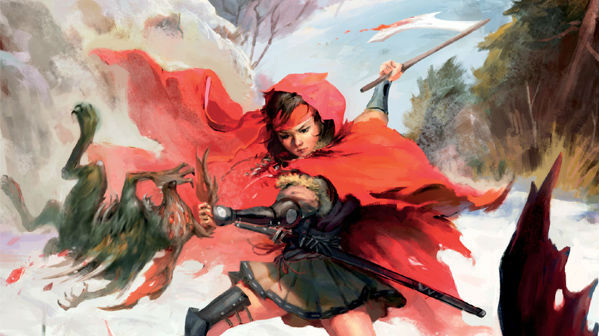 Akaneiro doesn’t hesitate to jump straight into action. Within the very first page, we are introduced to the Yokai demons being fought by the Red Hunters – necessary to keep the “balance” of the world, as too many Yokai could result in the destruction of humanity. The story then moves on to a nearby village, inhabited by the Ainu people, where a reluctant young woman named Kani is watching a traditional ceremony with her father. The two events collide, resulting in anger between the Ainu and the Red Hunters. In an effort to quell tempers rising between the two groups, Kani volunteers herself as a mediator and joins the Red Hunters.

The rest of the comic follows Kani; we learn more about both the world around her and Kani herself. The combination of demons, mischief, and the revealing of the world around Kani makes for a fun and interesting read.

By far, the best part of Akaneiro is the art. American McGee’s Alice and Alice: Madness Returns both have masterful art direction, so it comes as no surprise that a new story from American McGee would feature the same. Akeneiro definitely delivers with its visuals thanks to artist Vasilis Lolos; Kani’s expressions and movements are beautifully drawn. My favorite of all the art, though, is the cover art by Shu Yan. It is beyond masterful, and would fit right in at a fine art gallery.

I would definitely recommend this comic to everyone – especially those who enjoy both a female character as the lead and fantastic art. I did become attached to Kani while reading it, but it turns out that in the game you choose from different classes to play as, not necessarily as Kani. I can only hope that we’ll see more Akaneiro comics in the future featuring Kani.

In the meantime, I’m going to re-read Akaneiro and devour the art.

From the brilliant imagination of video game auteur American McGee comes a dazzling re-envisioning of Red Riding Hood set in the wondrous world of Japanese folklore!

A young woman torn between two cultures takes on an epic adventure battling devious yokai for the fate of her world! Collect the three-issue miniseries.