Review: Dungeon of Elements – Be an Adventuring Alchemist

Dungeon of Elements is a mixed-genre game (puzzle/RPG) from FrogDice that is the result of a successful Kickstarter campaign. 437 backers contributed $21,080 out of the $20,000 goal. Allahweh recently did a one-hour first look at the game, which you can watch here!

Fire, Water, Earth, and Air – elements of creation or tools of despair. Alchemists wield them with talent and skill, to strengthen the mighty or heal the ill. The practice of alchemy was respected and grand, with Guilds that prospered throughout the land. In the time of the Sundering, kingdoms fell, and Alchemy Guilds collapsed as well. Quacks and charlatans peddled their wares, posing as alchemists at markets and fairs. The practice of alchemy was no longer trusted, so their labs were abandoned and cauldrons rusted. King Rand rose to power, against the Void threat. He unified the continents putting all in his debt. The Void were pushed back and cities grew, the people prospered with hope renewed. Trade resumed and guilds returned. But alchemists still were mistrusted and spurned. One Alchemist Guild seeks to change this view, and towards that end they’ve recruited you. Ruins and dungeons, tombs and mines, you’ll explore them all and bring back what you find. In your cauldron, mix the plunder you brought. Unlock knowledge too long forgot. Restore the Guild to power and glory. Begin the adventure: this is your story.

Plot is not central to the game, but it’s nice that it’s there – especially for a game that doesn’t necessarily need a plot. The story unfolds via an illustrated, in-game book. It’s also something a little unique; you’re not a warrior, archer, or mage, but an alchemist (basically the RPG version of a scientist, if you think about it). You provide a background for your character (which really translates to picking your starting outfit) and can write an optional biography in character creation. The game tells you explicitly that both of these options are for roleplaying purposes only. 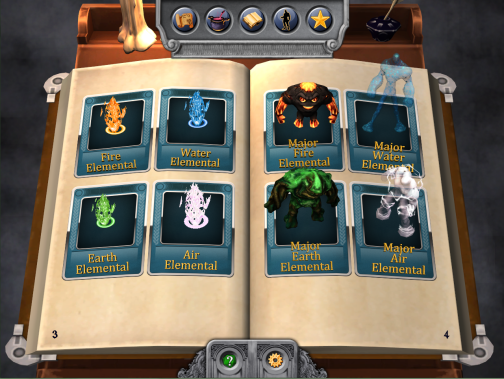 The graphics aren’t the focal point of the game, but they do look pretty nice. It’s not going to push your hardware, but for a Tetris-esque experience, I’m not looking for anything mindblowing. The models of the monsters look cool, and you can spin them around from the bestiary. The main screen you’ll be looking at for most of the game is the gameboard with the falling pills/monsters on the left, your character and his/her pet on the top right, and a 3D view of the gameboard that’s mainly there to look cool. I definitely need to give a special mention to the world map; I’m a sucker for maps, and this one is particularly well-rendered, with a nice pan effect whenever you go to look at it.

There are no voices in the game, and the music is generic and can get annoying if you’re not so great at matching (like me).

The game begins with character creation, and you can tweak your gender and how you look before heading out into the world. (Minor complaint: the girl model has super-cleavage at the start, but you can quickly cover her up, if you want to, with armor and clothes that will drop in the dungeons, as above). You get a very nice tutorial, then you’ll travel around the map clearing dungeons by playing a Tetris-influenced game. The falling pill can rotate around, and when you make a group of four of the same color, you clear them. You can also attack individual monsters with your weapon, but there’s a significant cool-down time. Some dungeons have a boss, which can be attacked with any color of pill. My one complaint is that sometimes a level will drag on forever because of the random element of what color pills you get. Some levels have holes you can drop pills down that you don’t want, but that doesn’t work for every level. The game has fifty in-game achievements.

Dungeon of Elements is a fun casual game to play in short sessions, and is a creative combination of match-3, Tetris, and RPG mechanics. If you really love Tetris, you might rate this higher than I do.

Right now, you can get the game directly from FrogDice for $9.99 (launch price; game will go up to $19.99). Everyone who buys a copy from them will get a free Steam code if the game gets Greenlit. Check out the official site, follow FrogDice on Twitter, like them on Facebook, and subscribe on YouTube.

Vote for the game on Steam Greenlight!