Kickstarter: U55 – End of the Line

By ardenwolfe September 16, 2013 Effective Evolutions End of the Line Horror kickstarter U55

It’s hard for someone such as myself, who is such a fan of the horror genre, to not be both interested and excited when H.P. Lovecraft comes up, especially in relation to games. Effective Evolutions plans to use Lovecraft lore as a basis for their new project U55: End of the Line.

U55 is a first-person survival horror story that is set in the subway under today’s Berlin. So far, it will be a Windows-only game. Staying true to Lovecraft, as it says on their Kickstarter page, “We want to recreate the classic “cosmic horror” setting of diabolical entities breaking into reality and bring it to life with the help of subliminal sounds.” That got my attention even more, so I read further.

We all know that sound has a lot to do with what is scary in a horror game. Well, U55 is taking it to the next level. One of the key features in U55 is the usage of Binaural Beats. The best way to explain it is they way they do: “It influences brainwaves by applying sound waves that run on the same frequency as your brain in a specific emotional state.” Basically, the same way that it’s used to calm someone down during psychotherapy will be used to scare the living crap out of people while they game! I think this is a fantastic idea, and one that I hope can catch on in gaming. 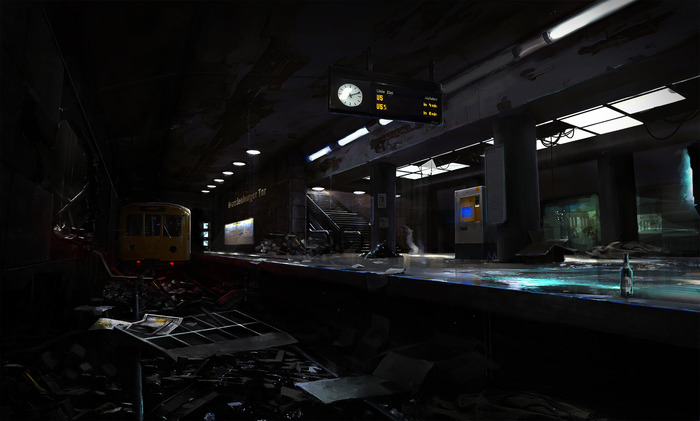 As for the story: you are David, an American student studying in Berlin. When David is on his way to meet his girlfriend, the subway train he is riding crashes, and he must navigate himself out of the subway tunnels with the light of his cell phone as his “guiding light.” This cell phone will be able to be upgraded and enhanced as you play, as it is your most powerful asset against whatever lurks in the dark. There will be some hand to hand combat, but very little; it’ll be up to you to be innovative. After all, you are only a lost student in the underground of Berlin.

The choices you make in the game will affect the game progression as well as the ending, so U55 is a game where choosing wisely is an understatement and using your head is more important than physical strength.

“We follow the classic Lovecraftian premise: when meddling with forces as old as the universe itself, you cannot simply fight your way through – the approach is up to you, but it’s brains, not brawn that will help you overcome these terrors.”

Some of the stretch goals for U55 include: a second character with a different storyline, multiplayer mode, support for Oculus Rift, new enemies and storyline, a Mac version, and much, much more.

There are a ton of different rewards for backers. Most of the pledge amounts come with a copy of the game and your name in the credits. Some of the other rewards include: a digital soundtrack and art book in the mid-price range, a hard copy art book if you pledge more, a signed poster, a making-of DVD, and a producer cred if you are a high-roller. U55 is also DRM-free for all backers!

There are so many cool things about this game that it’s almost impossible NOT to want to fund it. I really hope that this project makes it and that I will get the chance to play it. If you want to learn more, or I have already convinced you to help fund this amazing project, head on over here to the U55 Kickstarter page.

Go watch the video, read the details, and hopefully fall in love with this game as much as I did. Funding ends on September 19th, so get in while you can.