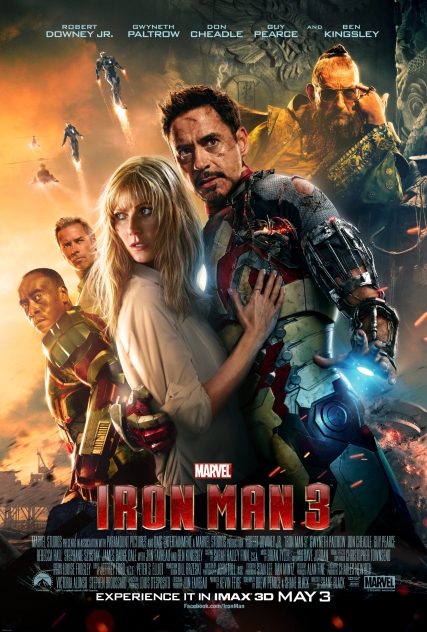 Iron Man 3 is the latest in Marvel’s overwhelming slew of comic book-based movies. Taking place chronologically after The Avengers, Iron Man 3 focuses on Tony Stark and how he’s coping after going through the wormhole.

I quite enjoyed the movie, and it was a definite improvement over Iron Man 2! I wasn’t sure quite what to expect either. The Mandarin is a pretty racist bad guy, and the “suit getting a mind of its own” story thread (in the comics) got a little…umm…how to word this…S&M, in a way? I didn’t know how they would incorporate these two things into the newest Iron Man based on the trailers, and was quite pleased with how it all worked out.

The plot was pretty solid, though often predictable. That’s not to say the entire movie is predictable, as I did find myself surprised at times. In general, however, it was a very normal fare.

An odd plot choice was the decision to have Tony Stark partnered with a child for part of the movie. It was very 80s/90s action movie-esque, and I thought we’d all grown past that. The cheesy ending to that plot made it look like it was added only for the product placement.

The best part of any Iron Man movie is watching Sherlock Holmes – I mean, Tony Stark – put the pieces together and figure out how to defeat his foe. Also, listening to his snippy-snappy comebacks and watching him be a loveable asshole in general.

Iron Man 3 is the kind of movie that you will watch more than once, if only to catch all of Downey Jr.’s terrific insults.

Ben Kingsley as The Mandarin

The fight scenes were awesome. There was so much creativity this time around with the use of the suit, pieces of the suits, and the people wearing the suits. Watching things explode into fireworks never gets old, and it’s easy to see that no expense was spared on getting the fight scenes just right.

The movie starts with an amazing song. Then the rest of the songs involve Christmas, so I didn’t love them as much, but in general the music and audio is on point. If you can, see this in the theaters so you can get the full experience of things wizzing by you in the air.

All in all, this was a great, action-packed movie with your favorite jerk Tony Stark. It addressed some interesting issues such as PTSD, physical handicaps, disorders, and the consequences of some of the fantastical stuff Stark has been through. After all, he’s only a man, not a god.

(Oh, P.S., can we talk about how Thor is now constantly blamed in every movie for the reason why the world is going to crap? Poor Thor.)

Anyway, funny jokes, high action, and a bit of character development: what more could you want for Iron Man 3? Sure, some things don’t make sense, and some folks complain that Downey Jr. isn’t even acting anymore (I disagree, but then again, I’m biased) and that the plot was predictable at times, but this was still a rollicking ride.

Oh, and stay until the end of the credits, of course.