EA kicked off the festivities at E3 this year by inviting you all in to play. Play was the word of the day. They really, really want to invite you to come play with them inside their windowless van, and then put the lotion on your skin or you get the hose.

Play to Live! seems to be EA’s new catchphrase, as they keep dropping it with a big grin, which also sounds like a new storyline featuring the Joker teaming up with the Riddler in a Frank Miller book.

To show off that this is the FUTURE! they also had a conference happening simultaneously in London, which they cut away to for absolutely no good reason whatsoever beyond the fact they could. 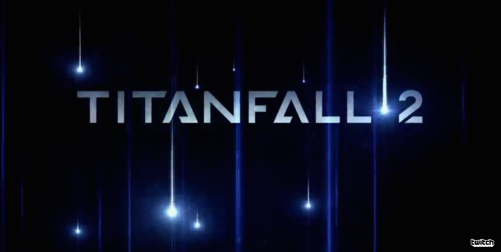 Having broken free of their deal with the devil (Mephisto’s been working with Microsoft ever since the last reboot at Marvel), Titanfall 2 will be coming to the PS4 for the first time. Seeing as I am one of those dirty Sony people, I know nothing about the game. My notes from watching the teaser trailer for the multiplayer are as follows: 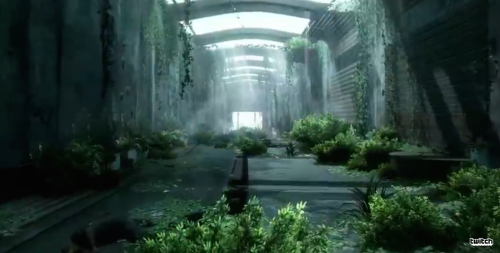 Like all games on EA, this’ll be running on the Frostbite engine which is pretty (and every damn game at the conference will mention Frostbite as if someone bestowed a golden apple upon them. Look, I know it looks nice, but we’re not talking ambrosia from the gods here. It’s an engine. Get over it!)

There will be six new titans along with new combat abilities, more customization, and all the other new buzzwords people throw out for the second in a series. You can sign up for the multiplayer test on titanfall.com.

If you’re more of a Single Player campaign moder like me, good news, it’ll have one of those as well. Which, going by the trailer, seems to involve you forming a bond with Optimus Prime before he got teamed up with Michael Bay and his life went down the crapper. 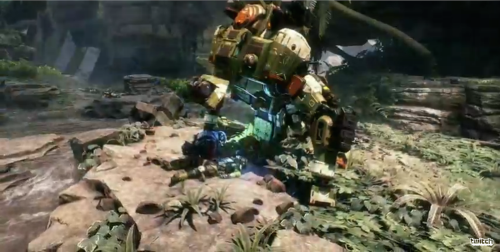 Coming October 28th of I assume this year. 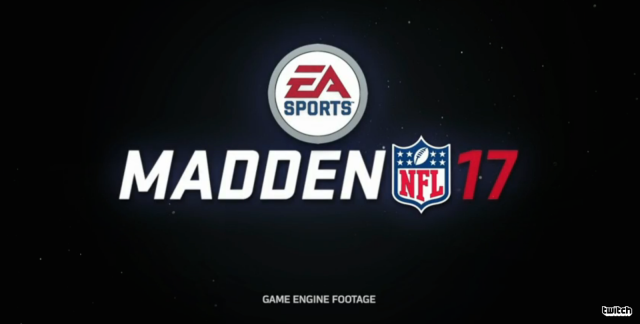 It seems football continues to exist and we have to cut over to London to talk about Madden 2017: You can’t stop their freight train of a franchise even with a nuclear warhead. Those Brits sure love their American Football, don’tcha know.

Because there’s almost nothing to say about “we updated the rosters, tweaked a few graphics, and Earl finally stopped swiping my strawberry yogurt out of the fridge,” the talk focused on their competitive gaming. I felt like I suddenly slipped into The Wizard.

For reasons beyond my understanding, they interviewed two of the eight finalists, I assume to prove that the average person is shit at giving an interview.

I know nothing about anyone on stage, but my money’s on the guy with his arm in a sling. I bet he’ll play with his feet! You can watch it on Twitch, YouTube, or Hell (Mephisto’s got the best hookups).

And what are these men competing for? Why, one million dollars!

The one we’ve all been sitting on pins and needles to hear about. People have been leaping about in speculation for all the secrets about to drop, maybe a hint of the plot, mentions of characters about to be opened to us like the ark of the covenant…and we got nothing.

There is a shot of a ship:

More N7 armor, so I guess Shep and your character were bunkmates at one point (not like that, unless you’re already writing the fanfic for it, then sure, why not.)

An Asari who they called a new alien in the voiceover but come on, that’s an Asari. 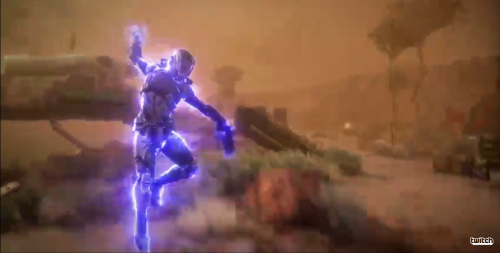 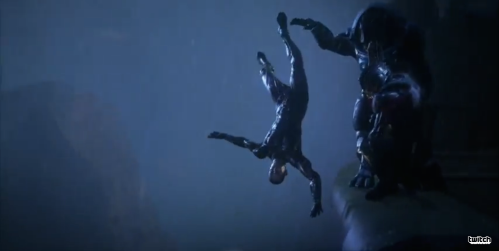 And, doubling down on the popularity of FemShep, a female character at the end waking up from her traveling through hyperspace to face down Andromeda.

And that’s about it really. Back to the speculation dome!

My $10 theory says that with the reintroduction of the Mako, a lot of this is going to be open world letting you explore the alien planets and set up settlements or make contact. I admit, I’m not wild about that idea myself. What I love about Bioware is the story and emotional buildup, which you just can’t get with open world. The ability to go anywhere at anytime works fine for the shallow pool in the Bethesda games of Elder Scrolls and Fallout, but if you want a connection, you need something linear.

Anyway, it’s all speculation at this point. We won’t hear anything more until “Fall,” which I bet will land somewhere around N7 day.

Back to London to talk about the football they actually give a shit about. In a curious turn of events, it seems the sports games decided to have their own campaign mode called The Journey (how long do you think they worked on that title?).

You play as Alex Hunter, a guy breaking into the wacky world of soccer to become über-famous. This includes such heart-racing moments as looking at windows:

Traveling on a plane:

I bet there’s a quick time event where you have to fill out paperwork with just the right pattern or you get hit for perjury! Whew!

If The Journey isn’t your speed, don’t worry, there’s still the ol’ soccer game of soccer.

Last year, they invited Pele to come stand on stage and look very lost about what was going on. This time, it’s that guy!

That guy! seems to be a Manager for Manchester United, which is the newest addition to FIFA 17. Kids go crazy for getting to play as the manager of teams. It’s a proven fact.

The best part about José Mourinho being invited to the stage was the way he sneered when asked about the video game itself. Seems his son plays it way too much and wakes him up at 4 in the morning. Great job there selling it guys. FIFA 17 – it’ll piss your parents off.

A few of my other notes from the FIFA 17 trailer in no particular order: The pitch is important, which is a soccer thing and not baseball, I think. Dead ball? Do some soccer balls come with skulls inside? I am 100% with soccer now. They made transformations, not Transformers. Too bad, giant robots playing soccer would be cool. There are more french accents here than in Assassin’s Creed Unity.

FIFA 17 – It’s Football for the rest of the world, you stupid Americans.

Last year, EA invited the team behind Unraveled to the big stage. They’re mining into the adorable Swedish creations again this time with Fe. (Seriously, is everything in Sweden big-eyed, you want to cuddle to death adorable?)

Fe is about our relationship with nature, or so said the quivering game dev pulled onto stage. You wake up as a young cub alone in the world and explore it by using music, as they call it.

The enemies are The Silence (no, not those Silence) who take out your adorable sneezes. I’m guessing they’re either a stand in for the dangers of man destroying nature or anti-histamines.

Sweden, stop being so damn cute! You’re making the rest of us look bad.

Star Wars continues to exist, and with those sweet Disney dollars rolling in, it’s unlikely it’ll stop before society’s crumbled and we’ve gone Mad Max. The Thunderdome will play regular screenings of all the trilogies, when people aren’t fighting to the death.

There’s not really much revealed, which should have been the real tagline instead of that creepy thing about playing to live. EA – we don’t have a lot to say.

A new Battlefront will be coming next year, with new fights to fight and battles to battle. Looks like Cloud City’ll be there, along with Lando looking a wee bit too smashed on Colt 45.

Visceral studios has a new action adventure game coming out in 2018 with a new story, new characters, and a certainty to piss enough fans off to encourage a hashtag or two.

Looks gorgeous and also like the First Order are still Space Nazis. That’s about it. Aside from the usual “we really like Star Wars and think it’s fun to play in that sandbox” smoke up our butts, we’re told nothing.
Galaxy of Heroes is doing something tablety:

And at one point in existence, Respawn will release its own third person adventure game, which they proudly show off by having two guys mo-capping a lightsaber fight (which is what I bet Daisy Ridley is doing right now.)

After a bit of bragging about how it has 60 million players (because if you can’t dick measure at a video game con where can you?), we learn that Battlefield 1 takes place during World War I. It seems we’ve finally mined every ounce we can from WWII, so everyone’s going back to the Great War, with trench foot, poppies, and blimps. Oh, you better believe there are blimps.

Before they played the entire trailer, they did a teaser, then cut to some big Battlefield game planned after that had Jaimie Foxx and Zac Efron fronting sides. What in the wild world of filling out your insurance before being let on the soccer field do you think those two had to talk about?

“Please stay over there.”

Okay, that’s enough celebrity awkwardness, back to the game. Now we can watch the full trailer. You can have up to 64 players at a time all scrambling to be the first to kill Archduke Ferdinand. Take that Kaiser! Got to brag about that Frostbite engine again, because if you don’t mention it, you’ll explode on stage. It’s happened before.

They’re very proud of their dynamic weather addition, which’ll include fog, rain, sun, and a hail of frogs (but only over France). Along with the blimps, you can also climb into battleships, planes, and armored trains to fight the war to end all wars. 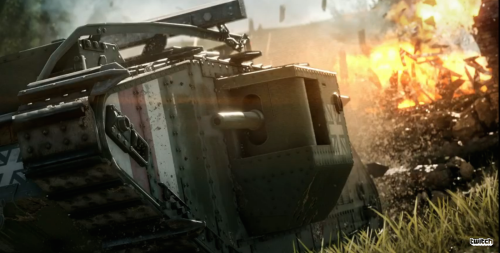 Battlefield 1 drops October 21st. The end of all war, however, is far off.

That’s all from EA; a whole lot of “uh, we swear we finished our presentation before today, let me just push some pins into an eraser and call it a piggy.” On the plus side, they can’t break any promises if they never make any, so…win?