Better Late than Dead is a survival game from Odin Games and Excalibur Publishing, released on March 3, 2016. A copy of the game was provided for review purposes, and the game itself can be purchased on Steam for $14.99 USD.

When I first received an announcement about Better Late than Dead, I assumed that it was some sort of survival horror type of game. The setting made me think of some sort of post-apocalyptic world where there would likely be some sort of zombies that would come for you at night, but once I fired the game up on Steam, I found out that this was a very incorrect assumption. This new title from Odin Games is actually a survival game through and through, but it also has a story to it that you need to see to its completion.

The game starts you out with a short cutscene that shows the main character’s coffin being thrown into the water, though he’s apparently still alive and well. He washes up on the shore of one island in a small chain. He has no memory of who he is and no clue what’s going on, equipped only with a backpack he finds on the beach and a photograph of a baby (his?). It’s with this beginning that every attempt at Better Late than Dead will begin. Each time you spawn into the game, you may appear somewhere else. At first, I was fooled into thinking that the game was randomly-generated, but the truth is that you simply spawn at random to one of several different starting locations on some shore on one of the islands in the chain. Some spawn areas might be more beneficial than others in certain ways, but each has a trade-off. One may start you out near plenty of food and water, while another starts you off near lots of good equipment, such as axes, oil, and cloth. Ultimately, you’ll likely die a few times before you learn the ropes of the game, and you’ll learn where each resource is and how best to make the most of your time.

Death in this game is permanent, so while the actual game itself may not take an incredible amount of time to get through, it’ll likely take many attempts and a mixture of both skill and luck in some cases. As you explore and scavenge supplies, you’ll start to find notes and other clues that allow you to sort of piece together what’s going on and why all the residents of these islands are either dead (there’s a surprisingly-large volume of body bags strewn around), missing, or somewhere in hiding. Initial clues talk about some kind of lab doing research and animals that have gone crazy, but the rest will be up to you to discover.

Survival depends on keeping your stamina up as well as staying fed and hydrated, and that requires scavenging meat, fruit, water bottles, and fresh water sources as you go. 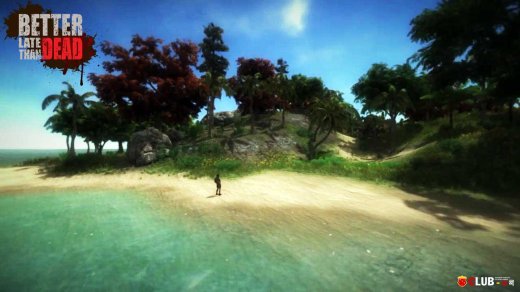 While this game definitely has its strong suits, it certainly isn’t without its flaws.

First, there’s just no getting around the fact that the controls often feel quite sluggish and clunky and this can get in the way at times, especially when time is of the essence. Combat in the game feels particularly weak, with a targeting system that only somewhat works, and the actual action of the scene feeling pretty slow-paced and weak. Thankfully, combat isn’t a huge part of the game, but there were plenty of times when I got surprised by a wild boar, wolf, or even a bear and it was really close due to the weak control scheme when it came to fighting.

Performance of the game also feels a bit off to me. I have a pretty beefy setup, and even so, the game ran in the 30-40 FPS range, only sometimes peaking up into the 50s or low 60s. This isn’t horrible, of course, but I’ve played far more demanding games that outperformed this one by a long shot, so I feel like a little more time should have been spent optimizing the engine, as this is the full version and not an Early Access build.

Still, the graphics are pretty darn good, the music (where applicable) is nice, and the sound effects do an ample job. I did feel like the sound mixing on the intro cutscene was pretty poorly done, but as that’s just one part of the game, it’s not a major issue.

Overall, I think Better Late than Dead is a solid effort, but it misses the mark in a few places. Perhaps future updates will get some of these issues in check, but for now I don’t think I’d pay the full price for it. If you can catch it on a Steam sale or as part of a bundle, go for it. If not, I’d wait until some things get fixed up before investing.