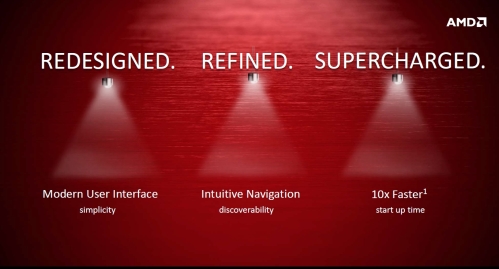 So, I recently pulled the trigger around the New Year and picked up Gigabyte’s G1 Gaming Edition of the R9 390X. Having really enjoyed my 4GB R9 290 (also from Gigabyte, as it turns out), I figured the 390X would be a good move for the money. Technically, my 290 could still pull in some really great performance on modern games, but I always like to future-proof a system, and since I got the 290 back in 2014, I figured it had a nice run but the prices on the 390X were just too hard to pass up for what you got from it.

AMD released their Crimson software suite back in November 2015, and I was able to tinker around with it at the close of the year. I really liked the different features that it had, and the 290 still could make very good use of them. So, when the 390X was set up in this PC, I decided that the smartest thing to do would be to do a clean uninstall of the previous AMD drivers and then set up the ones that would work best with this system (in this case, the Crimson 15.12 build). But boy, did that result in a world of issues for a good day or so. Doing the clean install was easy with AMD’s free tool you can download, and installing the software also took just a matter of moments, but for some reason, something kept fouling up each time I tried to install Crimson. The actual Radeon Settings panel and its options worked just fine, but I was having trouble accessing the Additional Radeon Settings menu (a slimmed-down shell of Catalyst that contains a few new perks I’ll talk about later on). I have no idea why, but every time I would install Crimson, the option to go to the Additional Settings panel would not work. I ended up clean uninstalling and reinstalling with different options several times, as well as trying to install the Crimson 16.1 hotfix edition, but it was a no-go each time. And then, finally, I tried one last time to clean install 15.12 and somehow, on that 11th or so try, it took perfectly.

Baffled by this, and because I have OCD, I uninstalled one more time and then installed Crimson 15.12 again, and just as before, it worked perfectly. Maybe some weird background process was preventing proper driver/software installation? Maybe it was writing to a section of the harddrive it shouldn’t have written to? Or something else entirely? Who’s to say, I suppose. 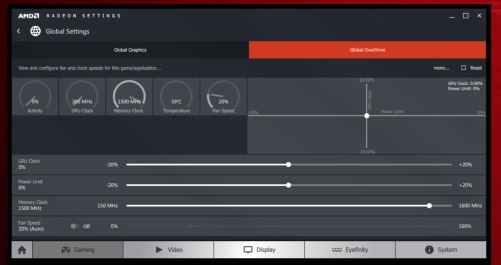 I believe that the new Radeon Settings interface is meant to just be a bit more visually-appealing and easy to navigate. The usual Video, Display (basic monitor stuff), Eyefinity, and System tabs are all available, as is the ability to overclock your graphics card through either game-by-game settings or global settings. Added to the mix under your gaming options, you’ll also find a Target Framerate Control that’s less hidden than before, allowing you to tell the GPU not to render anything more than your display refresh rate or whatever other number you want to come up with. This will allow for a bit of power-savings and also of course allow your card to run a bit cooler, especially if you’re overclocking it to begin with.

In the Additional Radeon Settings menu, you’ll find that AMD has implemented the ability to use custom resolutions. Nvidia users will note that these options have been around for a long while there, but this is new for AMD. A while back, something called Virtual Super Resolution was added to Catalyst, which allows for resolution scaling (or downscaling, to be more precise) for your displays, but this was actually limited based on the type of display you had and its basic resolution. Also, only a very limited number of cards (say, the R9 285) had the ability to scale all the way to 4K. So, these custom resolutions will work to solve that. This will take the rendered image and, internally in the GPU, render it at a higher setting (say, 3840×2160). Your system will then take that image and scale it down to fit the actual output resolution of your panel, using your subpixels to help approximate the higher resolution image. While this won’t output to look exactly like true 4K, in most all cases it’ll look better than standard 1080p, because there’s more information in the image that’s being scaled back down. You could approximate this to super-sample anti-aliasing if you want, though for the purposes of recording and all you’ll be seeing 4K as the resolution.

A warning with DSR/VSR/Custom Resolutions: despite being rendered at a “higher resolution,” if you don’t do a 1:1 pixel sampling, you may get fuzzy images. For example, scaling 1920×1080 up to 2560×1440 won’t look as crisp, because 1440p is only approximately twice the resolution of 1080p, which means the image is only scaling by a factor of 0.5 in each direction (e.g. not evenly doubling pixels), which means the system has to pick and choose what information to keep and what to discard. Going from 1080p to 4K would look better, because 4K is exactly twice the resolution horizontally and vertically. So, keep this in mind if you want to experiment with it.

You can also do some display overclocking in terms of refresh rates, but that deserves an article to itself because it can be a sensitive thing when it comes to proper pixel clock timings, etc.

So far, with my 8GB R9 390X card, I’ve seen good performance and great options from Crimson. It’s not without its bugs, but that’s to be expected from a new software suite.

In the future, I’d like to talk about and maybe review my 390X card, but I’ll need to really put it to heavy use before I do that 🙂

Thanks for reading! Feel free to comment or ask any questions if you have any!