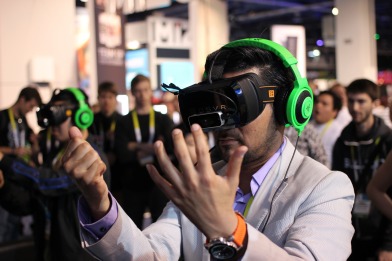 2015 is shaping up to become the year in which virtual reality technology finally hits the mainstream. A half dozen developers are all hard at work putting the finishing touches on fully-functional 3D headsets and motion sensitive controllers, revealing some truly stunning game software. While the space may still experience some growing pains as it continues to transform, developers are now capable of creating mind-blowing, three-dimensional worlds that will change the reality of gaming forever. Here are five games I can’t wait to see for myself.

This adventure saga for Facebook‘s Oculus Rift puts you in the shoes of a young boy marooned on an uncharted planet. Only by interacting with the strange plants and animals can you hope to uncover the secrets of the planet and escape. Early screenshots show a jungle inhabited by dinosaurs like T-rexes and pterodactyls. While an official release date has not yet been announced, developer Crytek has stated the game will be out in 2016. This one could do for VR what the classic Myst did for PC gaming in the early 90s.

Immerse yourself in intense dogfighting action with this hotly-anticipated aerial combat shooter that could unseat Call of Duty as the reigning online multiplayer champ. The game’s competitive capabilities are sure to make it one of the top titles of the VR catalog, although a reliable high speed internet connection will be crucial for those who want to test their skills online. Like most modern multiplayer shooters, there will be a wide variety of customizable weapons and other perks for players who advance through the ranking system. EVE: Valkyrie will be available for both Oculus Rift and Project Morpheus. There is no release date set at this time.

Exclusively for Sony’s Project Morpheus, this shooter puts you in control of war machines in a battle arena. Combining the mechanics of modern sports with heavy-hitting combat, and utilizing the DualShock controller for targeting, Rigs will support both solo and team-based play, and features gorgeously rendered landscapes with bright colors to support the action. Still deep in development, the game won’t be out any time soon, but it’s definitely one you want to keep on your radar.

No software launch cycle would be complete without an ingenious puzzle game, and Project Morpheus has one in Super Hypercube. Developed by experimental gaming group Kokoromi, this brain twisting experience forces the player to move an ever-growing structure through and around various obstacles in three dimensions. Early reviews are calling the game addictive and gorgeous to look at, and compare the experience to a journey through a wormhole. Release date TBA.

Survival horror is a genre that caters to specific tastes, and Dreadhalls, developed by Spanish company White Door Games, is poised to deliver the scares. Designed for Oculus Rift and Samsung’s Galaxy Gear VR, the game is set in a dimly-lit dungeon full of all manner of monstrous creatures. You’ll need to constantly find oil to keep your lamp lit, or you may have to wander about in the darkness, unable to see anything until it’s right in front of your face. The concept sounds truly terrifying.

In the years ahead, further developments in fiber-optic internet and haptic sensors will push today’s VR towards even wider applications in entertainment, education and communication, ultimately reimagining what gaming is and can be for everyone. With Oculus Rift pre-orders beginning before the end of 2015, it won’t be long before a VR headset is a considered a common element in every contemporary home. Immersive, interactive virtual reality games are officially here to stay.

One thought on “Five Most Exciting New VR Games”