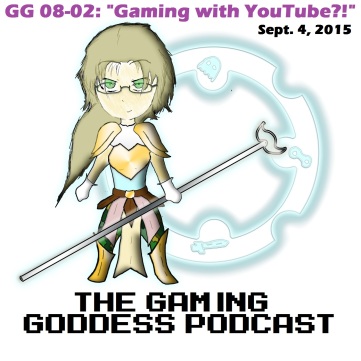 This week on The Gaming Goddess podcast, I talk a bit about Google’s recent soft launch of YouTube Gaming, which was made publicly available on August 28. Ever since it was first announced, people have been wondering if Google would be the company to have a shot at actively competing with Twitch, and I discuss the reasons why this might actually be the case, which include the fact that the service is already tied in with your pre-existing YouTube account and the fact that, unlike Twitch (which limits this to partnered accounts only) on YouTube streams viewers have the option of changing the resolution they’re watching in depending on their hardware and internet connection, allowing the streamer to stream in 1080p (or higher, if they really wanted) and letting the viewer still watch in 720p or whatever they can watch in.

I also talk some about the software that I think is currently best for both local video recordings as well as livestreaming. Currently, I think Open Broadcaster takes the cake here, but other good options include XSplit and even tools such as D3D Gear. Of course, OBS is free and very versatile, and it’s for this reason that I have to say I think it currently takes the lion’s share. OBS also supports hardware encoding for local video and broadcasting, and this is another excellent feature.

At the end, I include a message from Kelsey (EIC of Nerdy But Flirty) congratulating the show on reaching 100+ episodes!

Music this week comes from Wario Land: Shake It!! on the Wii. I just really love that game’s soundtrack!