The Fantastic Three and Some Girl 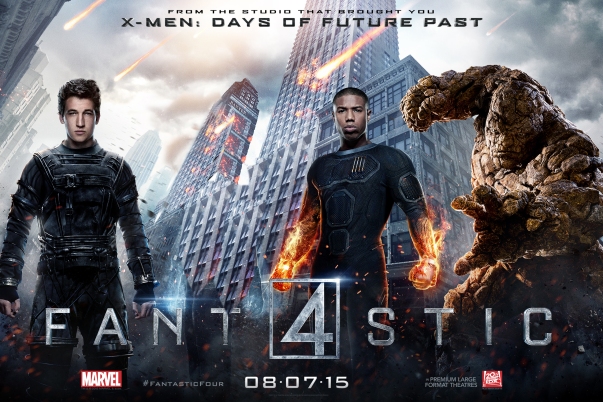 Everyone’s buzzing about the latest Fantastic Four movie that was supposed to eradicate the stink of Stretch Armstrong dancing. You know what I’m talking about.

Instead, we’ve got Miles Teller (Reed Richards) proclaiming that the critics don’t understand how amazingly his shit fails to stink, and the director (Josh Trank) blaming the studio for everything wrong with this movie because he can’t use Alan Smithee anymore. With a Rotten Tomatoes rating somewhere in the Negative Zone, you guys sure were right about critics failing to understand the intricacies of your all-boys club.

Now, perhaps you were under the impression that there were three guys and one woman in the Fantastic Four. There was dickbag rubber man, mopey rock guy, tinder match who would one day become Captain America dude, and someone else. Some lady who could turn invisible. I think her name was Violet.

Put on your spoiler goggles.

Because girls can’t be trusted around sciencey stuff and action lest their wombs will fall out, Sue Storm doesn’t go on the trip into whatever the hell Trank is calling the Negative Zone now. No, instead our little lady gets her special powers from trying to save those silly boys who actually went on the trip, when the computer somehow zaps her because Trank couldn’t fully write her out of the script, though Lord knows he tried.

Ladies, when will you learn that men don’t need your help? If you try to help them, then you just have to get punished with the ability to turn even more invisible. Now go back to baking in the kitchen instead of trying to be all superheroey.

Watch the clip Fox released to prime us all for this epic broness of testosterone. There’s nary a woman in sight.

The 2015 Fantastic Four movie is more retro bullshit “womenz can’t handle all this scary stuff” than the one from 2005!

Sure, it was all about Jessica Alba being a toy between Doom and Richards (seriously girl, just go bang Namor for fun and don’t look back), but at least she actually went on the fucking mission in the first place! It’s 2015 and the women are back to sitting at home waiting for the men to come back with a mammoth so they can cook up dinner for them.

I summon from the depths of my black, unable-to-understand-your-genius heart a massive Fucketh You.

Fucketh You, MRA, Sad Puppies, Gamer Gaters and everyone else trying to drag women back to the fucking dark ages. I hope you all catch bubonic plague and bleed from the groin.