Sometimes, it’s a little challenging to simply be “satisfied with what you have” in the world of PC gaming. Most likely, this is because of the sheer availability of tons of fun tech toys and new technology that creeps its way onto the market almost every day. It can be tough on your pocketbook and your sanity, though, and sometimes the incessant need to upgrade does feel a bit artificial.

Just got that nice, new 4K display? Try this 5K one with cinematic wide-screen!

Honestly, though, when it comes to displays, being happy with the screen you have is very important. You want one that looks and feels right for you, is the right physical size for your desk or wherever you’ll be using it, has a high enough pixel density to create crisp, clean images without causing severe eye strain while looking at small text and details, and, for us gamers, has a good response time and great color fidelity (the latter of which is also important for graphic designers and photo editors, among others). Because of this, some upgrades feel a bit more useful than others.

For a lot of people, having a nice 23″ 1920×1080 display with a 60 Hz refresh rate and a decent response time will be enough. Really, at the distance at which most people view their screens, a size like 23 or 24″ with a 1080p resolution is more than enough. Things will look clean and crisp, and the screen won’t be so big as to cause you to have to look around to see everything. Spending the money to purchase a 4K (3840×2160) display will be worth it to some, but mainly, I think this should be reserved for larger-format displays. The purpose of higher resolutions (at least in the TV world) is to keep an image looking crisp at a much larger panel size. On a 40″ screen, 1080p might look very nice, but at the same viewing distance with a 65″ screen, details might start getting fuzzy, because that same pixel resolution is spread out over a much larger surface. But, when it comes to monitors, the ability to multi-task is also important.

Well, LG has upped its game recently by getting into the ultra-wide HD field, releasing a series of ultra-wide monitors that display content in a stunning 21:9 aspect ratio. Having seen lots of videos of gaming at this resolution, as well as tech reviews showing off all the neat things you can do with all that extra screen space, I decided I really wanted one. And, after finding a fantastic deal where I could get the LG 29UM55 for under $250 (MSRP as of this post is $399.99 USD), I had to go ahead and pull the trigger.

First things first: the LG 29UM55 is pretty much plug-and-play. There’s included software (in my case, the disc containing it wasn’t present, but a very quick visit to the LG website remedied this with no problem) that works to facilitate a four-screen split, but this installs quickly and is unobtrusive, and certainly isn’t bloatware. The screen has options for HDMI, DVI, and Display Port/Thunderbolt. For myself, I picked up some high-bandwidth HDMI cables from MonoPrice (useful for these higher-resolution formats) and it worked like a charm. Right out of the box, I felt that the colors were well balanced, the brightness was well defined (thought I bumped it up slightly to full brightness), and very few things needed to be tinkered with. This is unusual in my experience, because a lot of manufacturers miss the mark right out of the box. Again, most people won’t care that much about that, but for those of you who, like me, are concerned with producing accurate colors, LG meets your needs.

The panel of the 29UM55 is an IPS one, and normally those have a bit worse of a response time when compared to a higher-speed LED one. Yet, this one actually advertises a 5ms response time and comes with options in the on-screen display to tweak those settings. The four options that were present were “Off” (bad response time), “Low,” “Normal,” and “High.” On High, the difference seems negligible versus the middle setting, but there’s some “reverse ghosting” present. In other words, the response appears to be a bit too fast. I followed the advice of a few folks online and kept it set to the middle setting and have been very pleased with how it displays fast-moving content.

One of the concerns with a non-standard aspect ratio (at least non-standard as of this article!) is in the displaying of “normal” 16:9 content. When viewing a traditional 1280×720 or 1920×1080 source, the 29UM55 uses black letterboxing on the sides of the screen and centers the remaining image. This is best equated to viewing a 4:3 TV show on a modern 16:9 HD TV. In the case of a rare few games (mostly unoptimized indie ones), the content is stretched horizontally to fill the rest of the panel, producing less-than-optimal results. On the flip side, because of its ultra-wide panel, this display can show movies in their full, original cinematic format, removing all letterboxing and having them fill the entire screen without warping or stretching or cropping the image. That, I think, is pretty awesome. 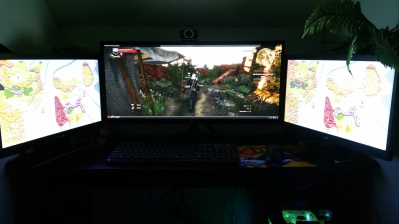 One of the built-in features of the monitor (e.g. no software required) is the ability to accept two simultaneous input sources and display them side-by-side on the screen. This is useful for someone who wants to plug a laptop in and see its desktop while also still interfacing with their main PC, or maybe for someone who wants to plug a game console in, be able to play that game (at 720/1080p) and still be able to see their desktop and, say, chat with their friends or have a guide open. Really, there are a lot of productivity options available to you with a feature like that. Then, using the LG software suite, you have the ability to pick four sources and have them displayed separately on the screen at one time. This is a true example of a productivity-minded production, and the possibilities are endless. You could have a browser, Word, and Steam open, and maybe a game running, all at the same time and all in high-definition. As my friend Greg joked, you could even try to play four 720p games at one time, just for the heck of it!

It’s worth noting that not all games currently support a 21:9 aspect ratio. Most do, but a small handful don’t at this time. Sometimes, the field-of-vision and all the graphics will properly render and show you a much larger world, but the UI may end up stretched or not looking quite like it should. Yet, most major developers are on-board with 21:9, so this is rare in my experience so far. Indie games, on the other hand, due to budgetary considerations, can be a bit hit and miss. In some cases, they cater to the standard 16:9 crowd because that’s where the overwhelming majority of their players will be, so you may have to deal with either a stretched image or a centered 1920×1080 (or whatever you select in 16:9) output.

In terms of retrogaming, though, a lot of games use prerendered graphics, and as such there’s nothing to gain from 21:9 rendering. Yet, for more modern titles where the games are actually rendered on the fly, a lot more is possible. The Dolphin emulator has no problem taking a GameCube or Wii game and rendering it with a much wider field of vision for you and, frankly, the results are amazing.

If you don’t believe me, take a look at this UWHD 21:9 video I produced of Zelda: The Wind Waker!

Finally, if you zoom in on this very-zoomed photo of the screen itself (showing the sub-pixel array), you can tell that there’s a lot more to the panel than just the usual Red, Green, and Blue (RGB) pixel format. Aquos, as you know, boasts four colors (adding in a Yellow sub-pixel to some of their displays), which creates a richer depth of color. With this LG screen, a keen eye will notice six colors in the above photo: Red, Yellow, Green, Cyan, Blue, and Magenta. In the on-screen menu, you actually have the ability to fine-tune how all six of these sub-pixels display, allowing you even richer options in terms of color calibration and attaining a true-to-life photo quality.

Additionally, having more sub-pixels to work with allows for better and more accurate resolution scaling to higher “effective resolutions.” Whether or not this means something to you, though, will just depend.

With a $399.99 suggested price tag, this screen seems like a worthwhile upgrade. The pixel density is very nice for a 29″ screen, the wider field of vision allows you to do more productivity-wise as well as enjoy games and movies in a much more immersive manner. LG also offers a 34″ variant of this same display (the 34UM65), retailing currently at $699.99 (though it’s on NewEgg right now for only $529.99). For those wanting a massive upgrade, $899.99 can get you their 34″ 3440×1440 WQHD screen. Keep in mind that, beyond the large amount of money to get that one, it would require even more processing power to maintain your games at an acceptable framerate (another issue with 4K and why people seem to be going other directions in their display upgrades).

For my purposes, I’m very satisfied with the LG 29UM55. It’s also a display I feel highly confident in recommending to you if you’re looking to purchase a new, high-quality monitor for your setup!