Venetia is a historical strategy game in which two to four players work together to conquer the Mediterranean and fight for control of the Serenissima Republic. Each person plays as one of the influential families of Venice, the heart of the Serenissima Republic, during the republic’s golden age from the 9th to 18th century. Each family works to extend the republic’s influence (and their own). The game is played in three parts: the rise, apogee, and struggle. At the end of each part, players score their points. At the end of the struggle, players add up all of their points, and the winner is crowned!

I decided to play this game with one of my closest friends who just so happens to be another huge tabletop game fan. She and I worked together to set up everything, separate our pieces (there was a small fight over who got to be red) and dive into this conquering adventure. Right away, there was a lot to like about this game. I love the historical accuracy. If I’m playing a game that models itself after a specific point in history, I want the history to be true. This game definitely hits all the points for accuracy, and even has alternate gameplay rules to increase the historical accuracy. Major points to Passport Game Studios for that. 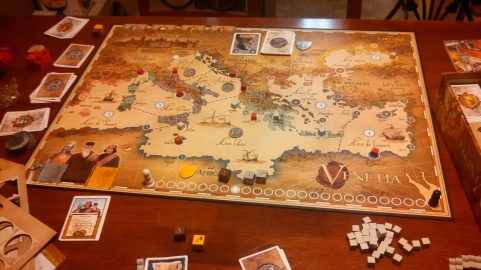 Components talk: In Venetia, you elect a Doge (person in charge). There’s a little doge hat icon for this, and it’s scaled so that you can make your character cards look like they’re wearing the hat. I was thoroughly amused by this. 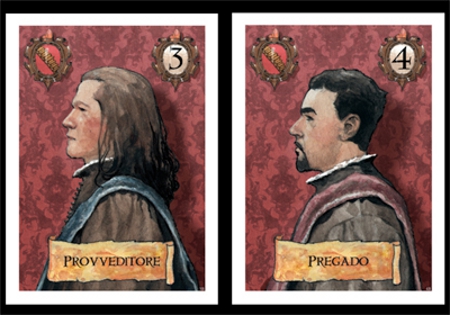 One thing I think could have been improved upon was the ease of understanding the game. Admittedly, my friend and I often jump into new games with both feet, assuming we’ll learn as we go, as long as there’s someone with us who’s played before. For Venetia, it was just us and neither had played before, so we had to depend on the rulebook. Certain parts of the rulebook were confusing and took us a while to grasp. We both felt like we would need to play a few more times to really grasp the game mechanics, but (and here’s the important part) we both wanted to play again.

Pro tip: My friend and I both thought our first experience with this game might have gone smoother had we played with more than two people. Consider playing with the max (four) or even doing teams your first time to heighten the experience.

Overall, I think the game does a good job at employing strategy, a bit of luck, and originality in a way that heightens player engagement and fun. Venetia can be used in European History classes or at your friend’s game night. This is definitely one that history buffs will enjoy!