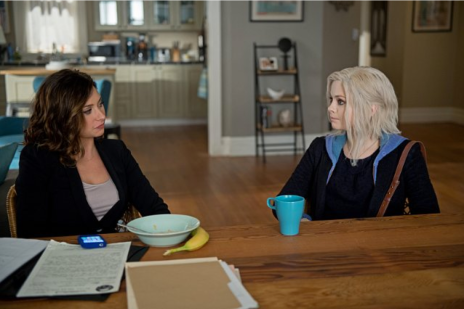 iZombie wastes no time in jumping into bed, with Liv getting the mother of all foot rubs from Lowell – her YA hero zombie heartthrob. This is just to tie back in with the theme of the episode, so we don’t spend much time on the “zombies are bonking now” thread. We have to check on Major Ken Doll, who once again got his ass kicked, this time in jail. Ah TV land, where cops are also corrupt toward white Abercrombie and Fitch models.

After Liv ignored Major’s calls, Ravi’s on the scene to pick up his weeks-old roommate from jail. That’s some serious dedication from someone who barely knows him. I know who I’m calling if I ever need to hide any bodies. This also gives Ravi plenty of time to finish the prison copy of Highlights (the magazine that no one prints but appears fully formed inside every dentist/doctor office across the country). Ignoring the implications of jails needing to have kids’ magazines strewn about, we see Liv’s roommate is back from her banishment into the negative zone.

Peyton goes all lawyer-y on the clerk, who doesn’t give much of a shit and gets the Ken Doll sprung. Ravi gets a chill from watching her work because this is the sex and love episode, and begs Liv to set them up. She blows him off repeatedly, leading to her tapping into out newest brain of the week – courtesy of one Sasha, playing the part of the sexed up radio jockey who talks in a Catwoman purr and tells people to DTMF.

Because Liv must still have some ESP from the psychic’s brains she ate off screen, she tunes into Sasha’s show for the first time before the brain eating and can’t stop listening to someone called Cheated on in Chattanooga. CoiC keeps threatening to kill her husband’s lover and taunts Sasha. As Ravi’s about to tell Liv about Major once again getting his ass handed to him, they hear the sounds of static and Sasha crying out as she falls dead on air.

Sasha was offed in a plot so cartoonish it belongs in a Loony Tunes episode. Our killer hooked up her mic to the station’s generator, so when she touched it after a break, she went Kentucky Fried Chicken. We meet our red herring and real killer within minutes of each other, which does make it a bit more difficult to guess who.

After ignoring the rats for a few days to get them good and hungry, Ravi decides to check on his experiment locked up in the supply closet. (And good job just tossing away the janitorial staff’s concerns there, buddy. I’m guessing that their cleaning equipment was in that supply closet so they couldn’t do their job. Enjoy a blood-and-organ covered morgue for awhile.) Ravi’s understandably freaked out when he spots five rats missing brains and then our little albino one. Liv coos and says, “Holy crap Ravi, he’s white and murderous. You did it, you made a zombie rat.”

She can commune with the rat because zombies are also Disney princesses (actually, that’s a great idea. Someone get Disney on that). They throw out magical science bullshit words – junk DNA, antibodies, gene therapy, blah blah blah – to try to act like zombification has any possible chance of being realistic. Unless you’re using puffer-fish toxin or mentioning that brain fungus, sorry, no amount of junk DNA is going to keep someone dead still alive. It will help you get humans to synthesize their own vitamin C, which is nice. I’m also a bit confused how a doctor is also a microbiologist and immunologist in his spare time, but it’s Ravi. Maybe synthesizing antibodies and extracting RNA is something he does for funsies.

But back to the case of the electrocuted sexy sex sex lady. She was in an ongoing feud with Rush Limbaugh. They said his name was Chuck (great radio name by the way. I’m surprised his show wasn’t called What’s Up Chuck?), but it was obviously Limbaugh. Fat and lording over his domain of blow-up dolls like a misogynistic king, he’s going into his oh-so-exhausting routine when Clive slaps a badge on the glass to shut him up. I may have cheered and mentally high fived Clive a few times. It also gives Liv, in full on zombie brain mode, an opportunity to diagnose Chuck. After another of his “women, ammiright?” moments, she cuts into him about his mommy issues and ends with, “All I’m saying, the inexplicable crying while cupping the carrot…there’s a reason for that.”

This kicks off a vision, this time of Chuck’s mail order bride throwing a drink in our dead Sexy sex sex lady’s face. Turns out, she was also sleeping with Chuck, because this lady had no sense of self esteem. But Chuck’s wife couldn’t be our red herring, because people from Ukraine can’t fake a southern accent, I guess.

In Zombie Mafia land, our Lieutenant from last week pops up (in case you couldn’t figure out he was working with Blaine) and used the crazy cultists to hide all those dead kids’ bodies. He wants out, but of course, Blaine has him by the curlies. He also tries to use the existence of Liv as a zombie for a trump card, but Blaine admits he already knew about her and she’s part of his plan. Dun DUN DUNNN!!

But enough about that set up for next week, back to our poor little Ken Doll. Liv finally wanders by and finds his face looking more like hamburger than Matt Murdock’s. He answers her shock with, “I can’t talk about Fight Club. Crap!” Major’s clearly losing his grip on sanity and, heavens to Betsy, is getting interesting. With the sunken eyes, the re-microwaved pallor, and the massive red welts on his face, I might actually finally care about this character. I’m beginning to see why the writers keep kicking the shit out of him.

He begs Liv to believe him about finding brains in Lenny’s car, but she pulls her zombie card and brushes it away, saying they found the body of Jerome and missing kids at the cultists’ place. It must have been them. And you just dreamed up the brain, dear, don’t worry your pretty little head about it. Major gives her the platitudes she wants to hear and rushes her out the door, but he’s not buying it. He’s going to do all he can to remain interesting, even if it puts him in traction.

After dicking around with shattered Major’s brain, Liv runs off to Lowell and goes on a rant about wanting a healthy relationship built on friendship and shared interests. I dunno, I’d say the whole zombie thing gives you quite a lot in common. They seem to get on pretty well, and we watched them playing around after he ate a gay guy’s brain, so Lowell’s shrugging it off as not important makes no sense. Is that not what a friendship relationship is? Commonality and fun built outside of the bedroom?

It’s pretty much a set up for Liv to admit she ate a sex expert’s brain so they can once again play hide the gangrenous appendage. Liv has another vision of a guy Sasha was screwing. This causes Liv to shout out, “Sam!” giving Lowell the great line of, “Guy you’re secretly pretending I am or vision?” But no, they’re not friends and have nothing in common at all. Riiiiiiiiiggght.

Liv’s munched brain is taking over, and after Ravi once again begs her to introduce him to her roommate, she cuts him down by pointing out that Peyton’s a lawyer who looks like a Victoria’s Secret model. Ravi says that he’s a tall doctor with a British accent: “I don’t even need to be this attractive. It’s just icing.”

I adore the fact that this show is actually acknowledging that all their characters are hot. Anywhere else, Ravi would be the nerd who no one wants to date because he likes gaming. Major would be affable and average instead of Liv insisting, “No, Major doesn’t get dumped.” And, yes, Peyton is hot as shit, and it makes sense she’s got a ton of men chasing after her. But the evil Sasha’s brain has to go and crush Ravi by saying she knows Peyton and that there are tons of guys who have moments with her but she barely acknowledges them and treats ’em like crap. Ravi’s lip wobbling, he stands up for himself and tells her that the brain’s made her into a real jerk.

Just as Liv’s singed all her bridges, she gets a break in the case and hears a commercial for a shop that shut down a few years back. The same southern voice is that of Cheated on in Chattanooga. Jane, the producer, points the finger at Kaylee – our red herring. While Clive and Liv are confronting her at home, her husband Sam rolls up as lost and clueless as possible as to what’s going on.

But there’s still another ten minutes to go; it was all a set up by Jane! She replayed the commercial from a place that closed a year ago so Liv would hear it and point the finger at Kaylee (who did not have a spiral parasol, sadly). Jane wanted to break into the front of the microphone but Sasha killed any chance she had, and pelted her with cupcakes. So Jane got back by killing her and tried hosting her memorial show.

It went NPR style with nary a Schweddy Ball in sight, leading all the fans to call in and tell Jane she sucks. Clive, Liv (who must get free ride-along privileges), and a few other officers stood outside watching Jane give her fiery super-villain monologue while the janitor fumbled with the keys.

Who cares about the case? We have bigger problems! Despite Liv having a commune with the rat, she left Ravi in charge of its care. He tried wearing oyster shucking gloves (giving him a chance to play some knife games), but that damn rat bit right through it. Now we may have our favorite sexy british doctor slowly turning into a zombie. No! As a friend of mine on twitter started, #SaveRavi!

Oh and Major’s decided to get himself a gun, because he really, really wants to get himself killed. When I think about Major, I always picture this image. 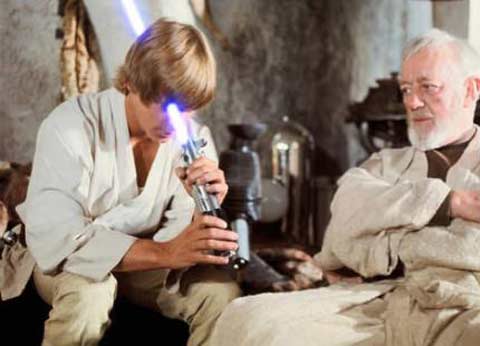 He totally would look down the barrel of a lightsaber.

In the final set up for next week, we end with Liv eating some brains at Lowell’s while watching him strum his guitar in the biggest fucking apartment I’ve ever seen. For being a nobody who won’t tour (despite Liv finding him outside a bar carrying his guitar) he must be rolling in dough. Trust fund zombie? While in the glass elevator (hedge fund zombie?), Liv spots Blaine carrying a cooler and has a zombie vision of Jerome flailing in the car after Blaine kidnapped him.

Next week, we have Ravi about to turn into a zombie (#SaveRavi), Major about to shoot himself full of holes (do you think he forgot to buy bullets?) and Liv swearing she’s going to kill Blaine. I’m rubbing my hands in anticipation.