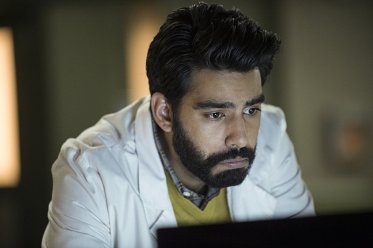 This episode was the perfect storm of everything I’ve come to love about iZombie. If you’re still on the fence about watching it, or are trying to convince someone to give it a try, use this one.

In a classic fakeout move, we get a “last seen on” clip of Major getting his ass whomped by a zombie who looks like he wants to ask George about some rabbits. This episode opens with a shirtless Major laying on the dead body table, with Ravi looking over him.

Luckily, they waste little time admitting that no, the Ken Doll’s not dead (plastic can take a beating, but don’t hold it next to the heater) and Ravi attempts to stitch him up. Liv walks in, pointing out how terrible Ravi’s technique is and that it’d leave Major looking like Frankenstein. (‘Frankenstein was really the monster’ – got to say that to keep any pedantic ghosts from popping up) Ravi responds: “The man’s too good looking, I’m just giving him character.”

Major admits to Liv how stupid he was by playing the part of vigilante and getting his ass beat by the Candyman (not this Candyman). But coming out of his zombie attack looking like Matt Murdock hasn’t cooled Major’s plans to be a part of this plot. He vows to find the killer and bring justice to the streets of Gotham.

We cut to the woman Blaine turned so he could exploit her. Jackie answers the door to a delivery guy and hungrily digs through the stash but can’t find the brains tartar. Delivery guy offers to run back and get it, but she decides to impale him on her coat rack and eat his brains instead. (IKEA’s new line of super sharpened furniture is both aesthetically pleasing and functional).

Cracks are forming in Blaine’s operation when his well-to-do sugar zombie takes to murder. But enough about the fascinating zombie mafia; we’ve got to get to the brain-of-the-week. In this case, it’s the stereotypical neckbeard living in the basement. He died alone, atop his stairs, and covered in confetti (This is how I want to go, but with a lot more squirrels involved). While wheeling the mostly-liquid corpse out of the house, a few people stand around taking pictures asking excitedly if he suffered.

Back at the morgue, Liv’s in no mood to drink the brain goo of the corpse. I don’t blame her. In chicken camp, I had to do a few necropsies on green birds (that’s code for no one in their right mind would touch this damn thing). It’s not a smell you easily forget.

Clive swings by, because the best coffee shop in Seattle must be outside the morgue, and we learn that our gooey brain guy was an internet troll. Liv must be a secret vampire as well as a zombie, because she has no idea what the hell an internet troll is. Come on, Liv, even CNN has think pieces on cyberbullying. Do you want to be as out of touch as CNN?

Apparently, our corpse has been harassing mostly small businesses under the name SimReaper. It’s probably supposed to be a reference to his real name, Simon, but I prefer to think he really liked deleting ladders out of pools and surrounding fireplaces with rugs.

Clive says it’s a murder, and looks to Liv for more of her zombie visions. She shrieks, not wanting to dive into soupy grey matter, giving us the second Ravi quote of the recap: “I’m sure Liv will suck it up any way she can.” I swear, I could quote that man for this whole thing.

Somehow, Liv sucks down the gooey innards and the first thing she wants to do is nosh on some donuts. “Great, I ate Homer Simpson’s brain.” I love when iZombie acknowledges and pokes fun at itself. This triggers a flashback to Simon chewing on a doughnut and slipping into anaphylactic shock. He makes it up the stairs just in time to reach an EpiPen. He’s got a peanut allergy, because he’s pretty much Milhouse in 20 years without the blue hair. And, sure enough, that confetti they picked out of his eyeballs smells like peanuts. This is why my nuts and glitter cannon business failed spectacularly.

Liv was planning a date with YA heartthrob Lowell (seriously, he’s British, a musician, AND a zombie? This is already a movie being produced by Summit, isn’t it?) but it turns out SimReaper, when not delivering urns to weeping sims, was agoraphobic.

Unable to face leaving, Liv calls Lowell and comes up with one of the worst lies when, mid-lie, she remembers she can just tell him the truth. I’m not sure about this Lowell guy, but I love that they skipped over the obligatory, “I have to lie to you to protect you” drama™ that so many other series rely upon. Her rapid-fire spiel about eating a dead guy’s brains and getting stuck in the house was great.

Ravi, fresh off finding and quipping over the body of the delivery boy Blaine’s sugar zombie offed, brings Simon’s laptop over. Thanks to the brains, Liv knows all the passwords and jumps right in (I’m having my brains microwaved right after death to keep this from happening).

Turns out our SimReaper (when not deleting all the doors) was a god in an MMO that isn’t World of Warcraft. Stop thinking that. That’s just silly. This is their own special game made up just for this show that’s nothing like World of Warcraft. It’s not a big surprise that Liv thinks it’s childish and stupid. I was gritting my teeth for the “all gamers are losers” storyline, or “all games are super dangerous and converting your kids to super Hitler, but iZombie managed to dodge the line thanks to Ravi. He’s always been portrayed as a bit different but never to Dwight Schrute eat-a-chicken-head levels of weird. He offers the yin of nerdom to Liv’s everyone else yang. It was also worth it for him to offer to help Liv track down whoever killed off SimReaper’s major character in game by saying: “I’m a werewolf with healing abilities called Arf Vader.”

After the Diablo mention a few weeks back and the WoW simulacrum, I’m thinking one of the writers is a huge Blizzard fan. Expect a Starcraft reference soon. Thanks to the zombie brain powers, Liv goes full game commando, ordering her group around while noshing on Cheetos and Mountain Dew. It’s a fun scene but dips pretty heavy into gamer stereotyping. But seriously, guys, stop wasting all your damn spells before we even get through the Cave of Misery. Duh!

The person she suspects of offing SimReaper in real life pops up, shocked to find him alive, and Liv drops the voice modulation to confront him as herself. Amazingly, he doesn’t scream, “Tits or GTFO!” But they realize that the 14-year-old living in New York probably didn’t kill their guy.

Liv’s still chasing down leads while trapped in her apartment. After having another zombie vision about doughnut shops, they drag in a couple who lost their business because of Simon’s Yelp review. I’m kinda sad that they didn’t have the hipster couple go full Amy’s Baking Company. Instead, they were bitter about Simon destroying their business but, like everyone else in the world, didn’t have a clue where he lived.

While this is going on, Clive’s chasing down information about the brainless delivery boy. Turns out, the kid had an entire elite dinner from CPAC in his stomach, pointing to the only fancy place in town – Meat Cute. It’s also owned by Blaine. (Zombies have a terrible flair for puns). Clive starts to nose around, wondering if Blaine’s seen the dead kid, when he hears a noise in the back.

Blaine offers to show him around despite a few torsos and chopped up legs kicking around. His Mrs. Lovett waits in the wings with her cleaver at the ready, but Clive’s saved by Liv having another vision. She’s finally seen the confetti exploding out of the card and heard the tinny tune of Ring-Around-The-Rosie.

Apparently SimReaper, when not forcing people to repair dishwashers despite being vastly underqualified, was also part detective. Based on the fact that he liked making people’s lives hell, a love of donuts, that the peanut confetti was sent in a birthday card, and an old song about the black death (kinda), she’s able to trace it all back to Shawn Posy. He was the same man standing outside Simon’s house taking pictures.

It turns out that a few years back, Simon made one of those, “Don’t you know who I am?” calls to customer service and the woman – Posy’s sister – put the whole thing on Facebook. It quickly went viral, and in response, Simon decided to destroy her life in all the old ways you’d think Liv would have known about if she ever got onto the internet. It culminated in Posy’s sister jumping off a bridge.

So Posy decided how to take down Simon, learned of his allergy from an earlier Yelp review and love of donuts, got a job at local doughnut places, and found him. I’m not sure how smart it was to include a reference to a woman Simon probably barely gave a shit about or send it on her birthday, but I’ve got to give him style. That’s almost Riddler levels of creative.

Lest you think we forgot about the Ken Doll, Major discovered the existence of YouTube (seriously, what’s with these people? Do they even know what computers are? Did they all fall out of a time vortex from 1975?). With it, he found the only picture of the Candyman, and shows Ravi and Liv. It isn’t the Lenny understudy they care about, it’s the white blonde man sitting next to them. Liv finally knows that the tons of missing children relate back to Blaine.

There are still another six episodes left in this season, and we’ve got our good guys aware of the bad guys, as well as Blaine’s operation showing cracks. Before, he lost a few delivery guys to their own greed, but now it was a customer to her hunger. It’s hard to maintain a business when you kill off both your workforce and customer base, though that does seem to be the dream of capitalism.

I look forward to seeing where it’s all going and invite others along as well. Tune into iZombie, I need to get more than 14 soul orbs.