iZombie: Flight of the Living Dead 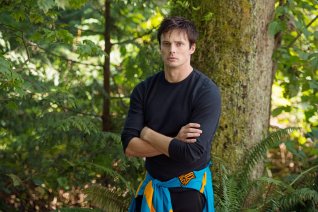 Is this creepy? I’m trying really hard to not seem creepy.

This week’s episode opens on a plane as a bunch of high-risk junkies get blitzed before doing something stupid and testing the validity of the theory of gravity. I’m not sure if we were supposed to be cheering for the ground to win this fight, but I was. The scene jump cuts to a skydiver impaled through a tree, her chute dangling limply to the side.

Liv and Ravi are on scene having a delightful conversation about nibbling brains on kebabs while a horde of police officers stand a couple dozen feet away. Either cops are so jaded that the idea of two morgue docs talking about eating brains from the fresh corpse doesn’t phase them, or they’re all planning on having a nosh later (Foreshadowing!).

Mid gallows humor, Liv gets a call from a pretty but plotless girl. It turns out that the satay-ed skydiver corpse used to be in Liv’s sorority. This is the first time the case of the week is tied to the main character but sadly, it’s not a very exciting one. Despite Liv getting all, “I have to eat this brain because of finding the real killer and getting vengeance!” Holly (our ex-adrenaline junkie) seemed more like a Facebook friend at best. Later, at her wake/memorial service, aside from Liv’s ex-fiance (who must show up anywhere he’s invited, kinda like a polite vampire) and her roommate, no one seemed to have a clue that Liv knew Holly.

Because this has to be stretched out to an hour, first we’re given the red herring of a strung-out Australian who can’t stop staring at Liv on the scene. His fellow free-basers throw him under the bus, saying he was acting weird, jumped last, and landed far away from the scene.

Liv has a quick zombie vision and sees Lowell freaking out at Holly on the plane before the jump. Of course, Miss Jumps-to-Conclusions figures he has to be the guy, and strong-arms Clive into bringing him in. This leads to an entertaining interrogation scene as each of the Max Ragers/Max Rangers (Max Paladins?) are pulled in. Clive gets a few great moments, as he only has to stare at Carson, causing the blonde snowboarder stereotype to spill his guts across the desk.

The toxicology report finally comes back, ending the obligatory ‘your boss hates you doing extra work’ plotline all cop dramas have to have, and it turns out Holly was drugged. At the memorial service, which must have also served as an after-Emmy party, Liv takes the opportunity to snoop around. In Carson’s bedroom, she finds a script pad signed by his dad. She also gets caught by Lowell, who’s still acting creepy.

He invites Liv to the bedroom bar and makes her a drink, which seems a real safe choice given that you know you have a killer somewhere and you already tipped your hand. While they’re trading quips, Lowell overloads his bloody Mary (FORESHADOWING) with hot sauce. Yup, despite the tan and dark hair, Lowell is a zombie too.

Liv switches from sarcastic and untrusting to doe-eyed Disney love so fast I get whiplash. Later at the morgue, Lowell stops by and gives such a saccharine sweet speech and – this is true – my dog sighed in consternation at the display. Get on with it!

Ravi’s not distracted by pretty zombie eyes. He tracked down whoever filled the script and it points to our snowboarder dude who would bang anything on two legs. While in the interrogation room, he delivers the final exposition plot device because they were running short on time.

Liv, and to some extent Clive, who was probably checking Twitter during it, go in accusing Carson of killing Holly because she was going to tell Eliza, the player’s girlfriend, that he was banging pretty much everything that moved. But Carson must have been bitten by a radioactive epiphany on the way in as he suddenly remembers: no, wait, there was a reply-all e-mail Holly read about how the company was going to screw me over because they found out I’ll also bang dudes. She thought that was weird, because it’s 2015 and a bisexual snowboarder seems like a good sell for the company to get behind and was going to take this to marketing. Anyway, Eliza found out. Rather than be upset that he was humping anything with a pulse, she said she’d protect the company and take care of it. “I did not know she meant take care of it Tony Soprano style,” Carson sputters.

For whatever reason, they decided that Eliza should escape after stealing her own shower curtain and leaving a lasagna behind in the oven. I’m not sure if Eliza’s going to become some kind of PR super villain and return, or if they just couldn’t think of a way to end it. Still, the lead detective congratulates Clive for giving the case a good try.

Clive takes the opportunity to ask about the piles of missing people. It’s reaching Starling City levels where even the police start to pay attention after the 90th corpse shows up with holes in its throat. But his hard ass™ boss waves him off insisting he works in homicide and not missing persons. As Clive leaves, muttering under his breath about how stupid of an explanation that was, his boss yanks open a drawer and dumps hot sauce into his coffee. Dun dun dun!

It’s not that big of a surprise that Blaine would have an in with the cops, but I’m getting rather impressed with his racket. Only six months ago, he was a zombie selling drugs to med students on a boat, now he’s at Kingpin levels of influence. Are we sure he isn’t a lost Koch brother?

Sadly, aside from the hot sauce coffee and Major Ken Doll getting a beatdown from one of his thugs, that was all we got about Blaine. This episode seemed to want to bring up the vengeance angle of brain eating, but it didn’t hit home. Liv repeatedly showed a misplaced remorse for kicking Holly out of a sorority, something that happened a good eight or more years ago. It’s like she went through the motions of mourning, but never really felt the pain for someone she knew as a passing acquaintance.

The possibility of another not evil zombie is intriguing, but did it have to be another guy? The only other woman who’s been in the protag’s circle is her roommate, and she provides next to nothing to the plot aside from snarky comments. She seems to be a lawyer, I guess, and drinks wine? That’s all we’ve gotten.

I’m hoping that if iZombie branches out to include other monsters, we get a new female character to fall into Liv’s circle. I vote for a werewolf woman myself. You never get those.

Next week’s promo looks promising, as Liv has to munch down on the decomposed and liquified brains of a green corpse, causing her to short out. Here’s hoping there’s more about the zombie mafia too.