Preview: Hardland – Is it Worth It? 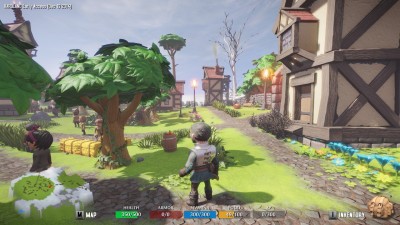 Logging in recently on Steam, one of the games advertised on my splash screen was an RPG I’d never heard of before called Hardland. Seeing that the game was procedurally-generated and had nice looking graphics, I delved a bit further. Since I had a nice amount of credits in my Steam wallet, I decided to go ahead and pick up the game. So, how is it? Is it worth picking up just yet?

The idea of a procedurally-generated RPG isn’t completely new. Cubeland did it when it made its first alpha version available in the summer of 2013, but given that Cubeland has been out for quite some time, progress on the game feels slow. Also, Cubeland is voxel-based, whereas this game takes a more cel-shaded approach to provide a more realistic graphical look (used here in a loose sense). Mountain Sheep’s development team says they want to make the game, “…one of the great open-world action adventure RPGs,” creating a living world that gets generated randomly and which, while having a story that you can eventually complete, effectively sets the stage and allows you to come up with your own adventures as you play.

With the latest public release, the game starts you off with an average-looking male adventurer type in the city of Fortuna. The layout of the town, its NPCs, and its placement in the overall land is random each time you seed the game, but Fortuna generally serves as your main hub for adventure. NPCs will offer random pieces of advice or commentary and sometimes have quests to give you. While there are merchants in town, most of your equipment will come from defeating enemies and gaining gear from their corpses – and hardly any of your equipment, other than weapons, lasts forever. In fact, gear has durability and eventually it will break through direct blows received in combat. 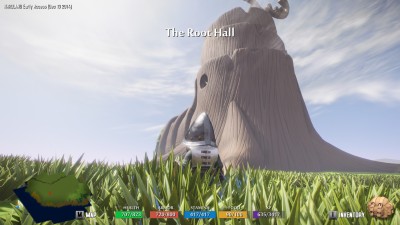 Enemies are very powerful when you first venture beyond the town walls, and death in the game is permanent. This can be overridden by the fact that you can save your progress, though. As you get comfortable with your skills and venture further into the wilds, you’ll begin to encounter different types of enemies, other towns, ruins, strange landmarks, and chests that contain various gear for your character. Hardland, in its current development (which is currently around 33% complete), isn’t as huge as some might hope. It’s effectively just a large island, and you might be able to explore and uncover most of the major landmarks and towns in roughly two hours or less. Whether this is the general size they’ll stick with by the final release or not remains to be unseen, but currently, I’m a bit underwhelmed by the scale of the landscape.

Combat seems similar to what you might expect from something like a Zelda game, for example, but the enemies aren’t very diverse just yet. In your travels, you’ll mainly encounter bandits, goblins, ghouls, and skeletons, as well as a few boss-types of different species. Once you hit level 8-9 in terms of combat experience, a majority of these won’t pose a significant threat anymore.

Right now, I feel as if this game has a lot of potential behind it to be great. There’s just so much that they can do with this game, but like with most Early Access titles, I’m left wondering if they’ll actually make use of the game’s full potential, or if they’ll tire of development and curtail it far too early.

As it stands right now with public release 7.0, is it worth buying the game for the $14.99 price tag? Eh…it really depends on what you want to get out of it. If you like exploring randomly-generated terrain and finding cool locations, you may enjoy what the game currently has to offer. A lot will still feel incomplete, including small things like there being an exceptionally-limited soundtrack that can get rather old before much time spent playing.

So, I feel inclined to offer you two “scores” of sorts…