I logged onto Facebook the other day and saw that I had a notification. I quickly became ecstatic — not because I had a notification, but because what I was being notified about was awesome. I was invited to like The Sunnydale Study Group’s page. Immediately intrigued by the Buffy reference, I decided to check it out.

First off, the creators of the podcast are more than five-by-five. Omar Najam of 2 Broke Geeks and Chris Bramante of Animfantastic team up to host this highly anticipated podcast, produced by Holland Farkas, a Geek & Sundry film/TV vlogger.

If you aren’t familiar with the hosts’ names, let me share a little bit about what makes them great Scoobies. Omar Najam is the Y chromosome half of 2 Broke Geeks, a YouTube pair who share advice on how to enjoy “Your geeky passions on a budget,” to quote their introduction.

2 Broke Geeks produce videos on their own channel as well as Geek & Sundry Vlogs. Omar often shares his love for BtVS and the Whedonverse in their videos and promoted Oztober, a month-long event dedicated to BTVS episodes featuring Oz (Seth Green), in October 2014.

Though I haven’t been following Chris Bramante as long, he’s quickly become one of my favorite YouTube personalities. He’s a musician and a geek, known as the host of Animfantastic on YouTube. 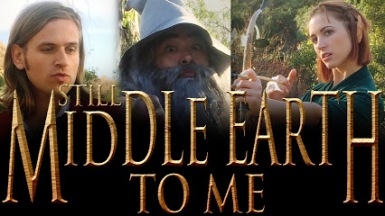 He’s also the creator of the comic hero Man Cop. According to his website, he performs with Robot Teammate+The Accidental Party, a record-holding musical improv group. Omar and Chris have been known to collaborate on videos in the past.

The podcast will debut on March 10, the anniversary of when Buffy first entered Sunnydale High. They’ll be re-watching the series, one episode at a time, and discussing the greatness that is Buffy of Buffonia. The Sunnydale Study Group plans to have regular guests on the show as well, though they have yet to release just who those guests will be.

If you’re already marking your calendars and anxiously counting down the days, never fear. The Sunnydale Study Group has a Facebook page and Twitter account so you can stay updated on any developments. They’re also planning to expand their social media and release podcast information soon, so make sure to like their pages and start following them now.

If you’re still on the fence, maybe this video from 2 Broke Geeks and this one from Animfantastic will convince you to join in on the epicness that will occur. I know I’ll be tuning in for every single episode of this podcast. For now, I’m going to rock out to Chris Bramante’s Billy Joel Hobbit Parody while listening to 2 Broke Geeks’ advice for throwing a Doctor Who party.

Who else is excited to return to Sunnydale High, research in the library, and patrol the cemeteries on March 10?

2 thoughts on “It’s Time to Return to Sunnydale High!”