Hi. I’m the Green Eyed Trombonist. I’m a girl. I’m a geek. I’m NOT a fake geek girl. But I was terrified when I joined the NBF team that I would be labelled as such. You see, I have a father who refused to let me own any gaming console other than a Game Boy Color because they’d distract me. He also has NO idea who Stan Lee is.

Seriously. As a result of my upbringing and appallingly low bank account balance, I own no comics. I don’t have a Wii U, Xbox One, or PS4. When I play Super Smash Bros., no matter the generation, I inevitably pick Kirby, and am what you would call a button masher. Based off of this alone, some might point their fingers at me and brush me off as a fake geek girl.

But I’m not. I’ve read every Harry Potter book more than ten times, seen every episode of Buffy the Vampire Slayer, and have spent hours scouring the internet for episodes of Doctor Who from the 60s. I co-wrote a paper about the Wicked Witch of the West and presented my findings at a conference in Prague because I’ve wanted to go there since Spike told Drusilla, “You nearly died in Prague” (Season 2, “School Hard”).

After this, I’m going to analyze the lyrics to basically every Into the Woods song just for the heck of it. I can’t even list all of my fandoms here because it would go on, seemingly, forever. I’m a geek. So, why am I so scared that I could be labelled a fake geek girl? 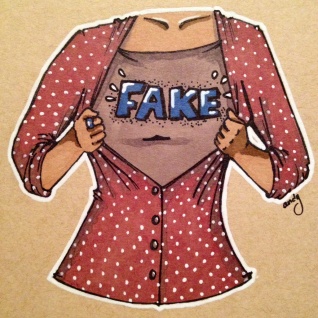 I’m sure there are people, guys or girls, who pretend to like something to get attention. However, this is not a condition that exists in the geek world alone. There’s also a stereotype of a woman pretending to like sports so a guy will want to go out with her.

The problem with this is, you’re either going to be found out as a liar or you’re going to start liking sports. The benefit of geek culture is that there’s literally something out there for everyone. If you pretend to like geeky stuff, chances are good you’ll find something geeky that you love.

Like space? Here’s some Firefly, Doctor Who, Dragonball, and Sailor Moon. Animals? How about My Little Pony: Friendship is Magic, Thundercats, or Pokémon? The death of a character’s loved one/parents? Here’s basically every superhero story arc out there. Enjoy.

There are no fake geek girls. There are only geek girls getting introduced to their fandoms. If they don’t know everything about a fandom, don’t brush them off. They’re new. They’re still learning.

Yet, the idea persists. Male authors and illustrators of comics have harped on cosplayers, with an emphasis on women cosplayers, stating that they contribute nothing to geek culture and never buy anything. Tony Harris is one such writer who chose to post a rant on his Facebook about Cos-Chicks who are less cool than “the real nerds.” The real nerds are, apparently, men. Women who cosplay are, apparently, imposters in geek culture. The rant I’m referencing is a year-and-a-half old now, but clearly illustrated that Tony Harris (and many men in the geek community, not to pick only on Tony Harris) believes in the fake geek girl. 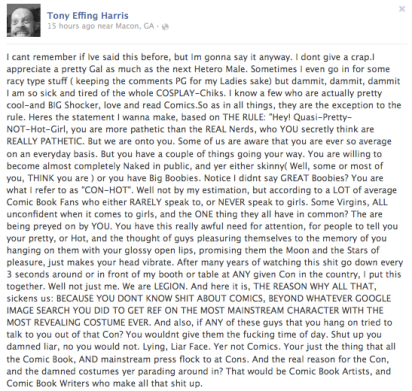 It’s that attitude right there that made me nervous to write for a nerdy website and has made me nervous to speak up about my nerdiness in the past. I’ve yet to make it to a con because I’ve been so worried that I’d be thrown into the category of “fake geek girl.” I’ve been afraid I’d be judged before I reached the door.

But, you know what? I’m tired of worrying about what other people think of me. I’m tired of feeling ashamed and less of a geek because I wasn’t raised in geek culture. I found my way to geek culture myself, dammit. I paved my own path. From my first episode of Sailor Moon, I fell in love with fandoms typically labelled “geeky.” I’d rush home from the age of eight so I could watch anime (and keep my sister from getting the remote to change the channel).

I learned to ignore when people told me I should grow up. When I was told to throw my geeky loves aside and join the adult world (looking at you, Mom and Dad), I chose to fall in love with geek culture all over again. I don’t love or know every fandom, nor would any reasonable person expect me to, but I’m a geek girl and I’m extremely proud of that fact. I know what my interests are and what I enjoy in life, and I’m not afraid to let the world know it.

And what of the fake geek girl? I fully agree with Urban Dictionary’s lack of an entry; there are no fake geek girls. There are girls who are geeky about different fandoms, or have different aspects of the fandom that interest them. That doesn’t make them fake, that makes them their own unique geek. And isn’t that what being a geek is all about; liking something that isn’t considered mainstream and following your own unique path of happiness? Let them be to explore. Or, better yet, go exploring with them. I bet you’ll learn some new geeky things while you’re at it. 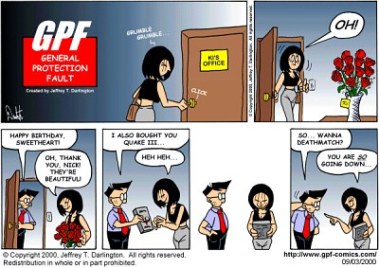 One last note. Urban Dictionary did have a definition for a geek girl:

Needless to say, I approve. And to NBF, all I can say is “Thank you for adding me to your awesome, geeky team!” Now, I’ve got some lyrics to analyze, and then my fire-mage elf and her pet ferret are going to take out some Owlbears. It’s a good day to be a geek. 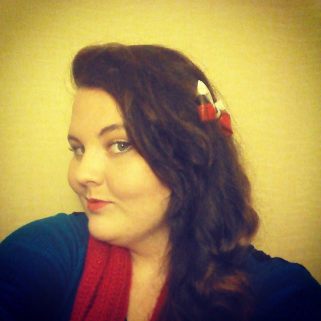