Someone over at Adult Swim Games must know that I’m a big retro and retro-style gamer, because this is the second game they’ve sent me that has a strong retro appeal to it. Of course, you don’t see me complaining about that, do you? I received Mega Coin Squad back in early August, before the game’s official launch, and I had every intention to play and review it then, but real-life kept cropping up and getting in the way (well, not “in the way,” as that makes it sound bad, but you know what I mean!), so I put this one off a few times. Finally, I resolved myself to playing the game, and boy, was I missing out on this one!

Mega Coin Squad is a game that truly has its roots in the action-platformers of the late 80s and early 90s. I’m not sure that I’d say the game really has much of a “story,” but it basically boils down to a team exploring an island with areas that hearken to classic games like Super Mario Bros. 3 in search of treasure. If anything, the game has a crazy, Wario Land-esque feel to it. In the style of something like Mario Kart, each of the characters you can select has something different that he or she brings to the table. Some characters have more speed but lack control and weight (think Luigi in his Lost Levels iteration), while others are heavy and but lack speed and the ability to jump higher. All of that just boils down to the preferred play style of the player.

In each stage (well, the first three of four in any “world”), the goal is relatively simple: collect X amount of coins in Y amount of time. Characters come equipped with a default attack skill (say, a fireball), a dash skill that will hurt enemies and allow them to reach higher-up places, and can pick up power-ups from “P” boxes spread throughout the level. As time goes on in the stage, some objects will disappear and others will reappear. There seem to be only so many configurations possible in a stage, though they seem to cycle randomly, which means that if you fail to finish a stage in one go, the random set up in the next attempt may benefit you in terms of speed of completion. Of course, each area has enemies that are out to get you, and you can only get hit three times before you lose and must retry the level. 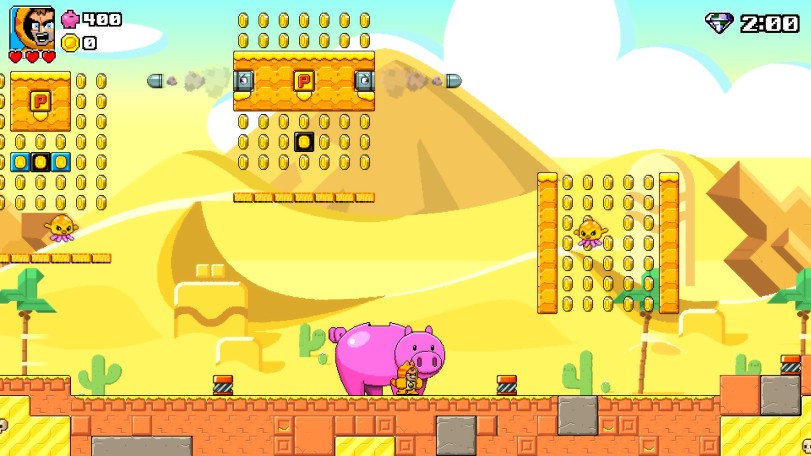 To make things more interesting, each level has three “diamond” rewards that you can get. These are based on your time of completion, whether you get hit or not, and whether you use the bank more than one time in the stage (basically, when you get hurt, you lose a certain amount of coins, so strategically, you might bank some during a playthrough). While not completely necessary, those who are OCD like me may make the effort to get them as often as possible, and doing so gives you more power-ups at the end of the stage. How many diamonds you receive determines how many hits of the roulette block you get to make, and thus how many power-ups you will have at your disposal.

The graphics are well-done. There are many references to classic games, like a Game Boy seen somewhere under the water, and pipes from the Mario universe in the background. Music is catchy and fitting, and the controls are fairly solid, though a bit more customization would have been nice (or any, really, as I didn’t see a way to do so). One complaint I did have was that the fourth stage in each area is basically a “kill all the enemies” type of area, and seems quite unfitting compared to the other levels. I’m not sure why that design choice was made, and honestly, if something like that was going to happen, I’d have preferred them to instead put bosses at the end of the areas since that might at least make sense!

This game is currently $14.99 on Steam, and I think this is a fair asking price. There are 16 levels in the main solo campaign and the game features a local multiplayer option to keep the fun going. So, if you’re into classic-style platformers, this game is worth looking into! 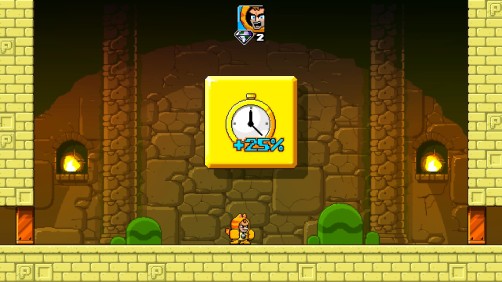 One thought on “Review: Mega Coin Squad – Mario on Steroids?”