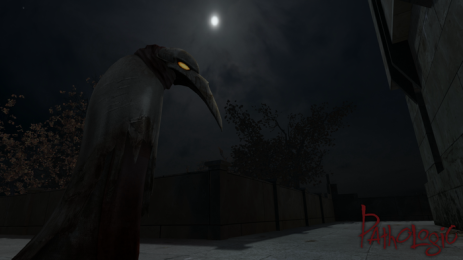 The Kickstarter for the remake of Pathologic from Ice-Pick games – known for Knock-Knock, The Void, and Cargo! The Quest for Gravity – looks amazing. Here’s the official plot:

“A mysterious and deadly disease breaks out in a remote town built upon old tanneries and butcheries. Whilst the disease can be identified by physical symptoms, its roots and origins remain mysterious. The disease is highly infectious and deadly. It affects the neural and the blood-circulating systems, crippling both body and mind.

To fight the epidemic the local authorities first send a learned doctor, then an inquisitor ordered to assess the situation, then a military commander. The first has to investigate the disease and find an optimal solution; the second has to save as many lives as possible while executing said solution; the third has the right to exterminate the whole Town should the others run out of options.

Along with the authorities’ agents two volunteers find their way through the Town along with the learned doctor, who goes by the name of The Bachelor. One of them, The Changeling, is a strange girl who believes she can heal with her hands, and the other, The Haruspex, is a talented amateur who’s fond of experimental surgery.

Taking on the role of one of these doctors, you’ll explore the town, its weird traditions, and the complex relationships of its inhabitants. You will only have twelve days to defeat the invisible enemy called the Sand Plague.”

I don’t know about you, but I want to play this game NOW. This is a remake of the original, with a lot of updates and fixes. The game is about survival, and is in semi-real time (two hours of gameplay = one in-game day). The game hits a lot of the buttons that make me love something – open world with a story, exploration, and emphasis on choice. Pathologic first came out on 2005, and it’s somewhat of a cult classic. However, the company admits that it succeeds despite its flaws, and they want to go back and make it right this time.

Rewards are many, but you can get in on the ground floor (a copy of the game, a soundtrack, an art book, and a Kickstarter-exclusive item) for only $25. At the time of writing, they’re only $10,000 away from their goal, so I hope we can make this happen!