Fantasy Flight Games announced their upcoming release of a new line of roleplaying games that are all horror and survival themed. It will include four books: Zombie Apocalypse, Wrath of the Gods, Alien Invasion, and Rise of the Machines. 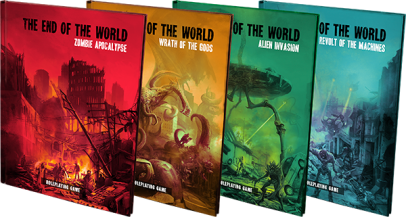 “The first book in the series, Zombie Apocalypse, challenges you to face hordes of undead that rise and stalk the earth, hungry for the flesh of the living. The series continues with Wrath of the Gods, pitting players against a pantheon of supernatural foes intent of destroying humanity. Ranging from the Mayan apocalypse to Cthulhu, the gods return to exact terrible vengeance in this book. The third installment in the series is Alien Invasion, giving you the opportunity to battle unknown life forms from beyond our galaxy. You may face a species of conquering warriors, or aliens too small to see with the naked eye. Finally, Revolt of the Machines invites you to match wits against artificial intelligence. When our technology develops consciousness, even normal people will need to battle technology in every form.”

Each book will contain five different scenarios, all built around the theme of the particular book. Though the books are built around the same rule system, each book is a stand-alone, complete experience.

When I started reading about the books, I figured that players would create fictional characters, but that’s not the case. The game wants you to use your own physical, mental, and social attributes to create the character of yourself. The game wants to transport you into the apocalypse and have you experience it first-hand. To enable you to create a realistic character of yourself, they offer both positive and negative features, like “nearsighted” or “wants revenge.” 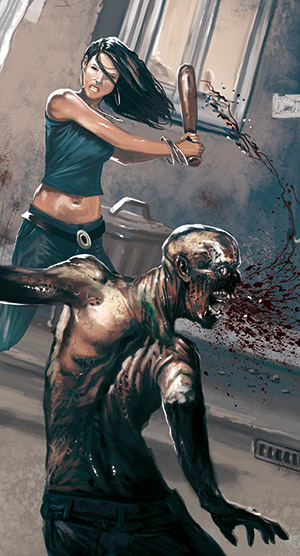 Because you’re playing yourself, you don’t have an arsenal at your disposal. Instead, you have to make due with what you can find immediately around you when you sit down to play the game. If you have a cell phone, it won’t stay charged for long. Having a shotgun would be ideal to dispatch zombies, but getting one could be a problem.