Missed my review of the first episode? Check it out here!

So as you can tell from the title, episode two totally introduced Ami as the next Sailor Scout, Sailor Mercury! I’m super happy the show’s creators decided to speed up the timeline so much and introduce the core Sailor Scouts immediately. This significantly cuts down on the repetitive monster of the week formula of the original show.

While the timeline is pushed forward significantly, this episode is very similar to the one from the original series where we’re introduced to Ami. To sum up the episode, Ami’s a genius and the evil monsters harness all of the smart school children’s “energies” to try to help them find the legendary Silver Crystal. Obviously, they fail. 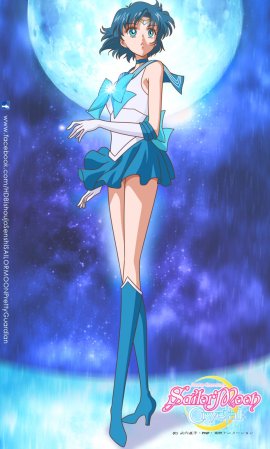 Here are some of the differences from the original show:

When Ami and Usagi meet – thanks to Luna of course – Ami has a quick vision of the Moon Kingdom. I love that. I think the flashbacks really add a nice bit of foreshadowing to the show, and they’re really cool.

Also, unlike the original series Mamoru, aka Tuxedo Mask, walks around in his tuxedo! Ridiculous! How does Usagi not put it together that he’s Tuxedo Mask?! Regardless, I love that they meet again in this episode by her accidentally throwing paper in his face, just like they did in episode one. Adorable. As an avid lover of the original series, it makes me stupid giddy whenever they’re on screen together.

Ami’s transformation is so much better! I love that she gets surrounded by water and then it becomes her sailor suit. Also her tag line is amazing: “Douse yourself in water and repent!” What a badass. Her power is now called Aqua Mist instead of Bubble Spray! It was definitely ridiculous in the original series that she just threw bubbles at people. The endgame is still the same though: both powers still create a mist that monsters can’t see through.

Another cool update they made is Sailor Moon’s tiara. In this episode, we can see her tiara more clearly when she uses it as a boomerang, and it looks awesome! Definitely better than just the glowing disk thing from the original series. This one looks like it could actually do some damage!

As a whole, I really loved this episode. I think they’re doing a fantastic job of staying true to the original series and still updating it. I’m so excited to see what happens after all of the scouts are introduced together. Next up should be Sailor Mars! The show teased Rei for a second at the very end of the episode. I can’t wait to see how Usagi and Rei interact. I hope they bicker just as much as they did in the original series!

The only downside is that we have to wait another two weeks for an episode! *Channels Usagi’s crying ultrasonic waves* Waaaaaaaahhhh! You can catch the new episodes on the first and third Saturday of every month on Hulu and Crunchyroll.