The spring anime series is well underway, with nearly all of the fresh series nearing the crucial five episode mark. A pivotal point in my anime watching, giving anime a certain amount of episodes to decide whether the series is worthy of continuing is a good way to weed out what you’re not that interested in. Dozens of anime series release each season, so it’s almost impossible to keep up with every single one. Although I am biased to my own personal genres and interests that captivate my anime-loving heart, I think the five anime listed here are worth checking out for any anime lover. 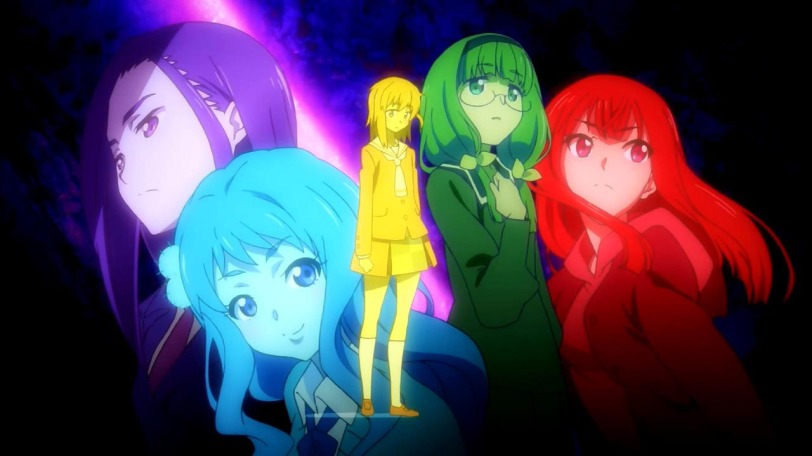 An anime that I personally think mixes Yu-Gi-Oh with Madoka Magical, WIXOSS follows lead protagonist Ruko as she begins playing a popular card game. She learns that her card’s fighter (called a Lrig) can talk, which makes her part of a select group of card players chosen to be Selectors. These girls play with the hopes of defeating other players in battle in order to get their wishes granted. This anime can be watched on Funimation in North America and Crunchyroll in Europe.

In the near future, a parasitic virus has almost decimated mankind. Humanity is forced to move within metal walls to escape the epidemic. Female children born with the virus are soon discovered to have superhuman abilities. This anime can be watched on Crunchyroll.

3. The Irregular at Magic High School (Mahouka Koukou no Rettousei)

Magic has been a popular theme in anime the past couple of seasons. In this series, magic has been used as technology for nearly a century. Students attend a high school where they learn to use Casting Assistant Devices in order to perform magic rituals. A mobile game and Playstation Vita game were recently announced to accompany this series. It can be watched on Crunchyroll and Hulu.

Being a huge fan of Soul Eater means I just had to check out this side story. Biased? Maybe. Soul Eater Not! follows the NOT class at Death Weapon Meister Academy. This particular class is trained to control their powers so they don’t cause harm to themselves or others. The series follows two female meisters and a female weapon. It can be watched on Funimation.

Twelve female assassins are tasked with infiltrating an all-girls school in order to kill their target. One of them, however, begins to fall in love with their target and decides to protect her. The series can be watched on Funimation.