Goin’ Down To South Park – South Park: The Stick of Truth Review

South Park: The Stick of Truth is the highly-anticipated canon game of the television show developed by Obsidian Entertainment and published by Ubisoft. With heavy input by creators Matt Stone and Trey Parker, does this game live up to the hype? Check out the official trailer (WARNING: VERY MATURE): 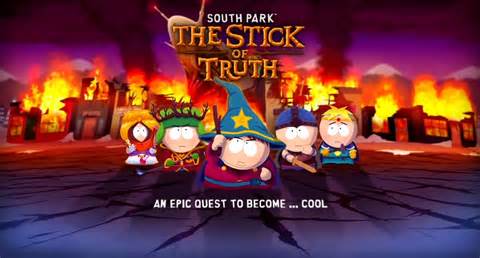 You’re the new kid in South Park. Your first mission is to make friends in your new hometown, and you soon meet Cartman, Kenny, and Butters. You are quickly roped into helping the gang try to regain their beloved Stick of Truth in an epic role playing battle against the elves (Kyle and Stan).

SP:TSoT is one of the most beautifully crappy games I’ve ever had the pleasure of playing. The game looks exactly like an episode of the TV show, and the voice acting by Matt Stone and Trey Parker is top-notch. The only tell-tale sign that you’re playing a video game is the very short loading screens that interrupt segments of gameplay. Every sound effect from the show is implemented in the game, even including the tune that plays after a commercial break on the TV show, which plays once you load up your game. 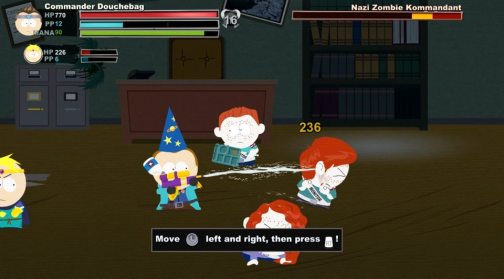 Gameplay is very simple and intuitive, but highly addictive. This isn’t a complex RPG, which is perfect for newcomers to the genre or even gamers who don’t usually enjoy this type of game. Battles are fast and fluid, and the special attacks are disgustingly awesome. Every location that has appeared on the show can be visited in the game, and every major character is present. There are even some very hilarious cameos.

South Park: The Stick of Truth is one of the best licensed games to ever be released, and is easily a contender for GOTY 2014. With major fan service to viewers of the show and easy, accessible game play, this is an excellent IP and a must buy. If you’re easily offended or squeamish you might want to skip this game, but for everyone who enjoys puerile jokes, gross-out humor, and satirical homages to the current generation, this game is perfect for you. Respect my autoritah and check out this game!

One thought on “Goin’ Down To South Park – South Park: The Stick of Truth Review”