AnimalAlbum is a one-man effort by Sjors Jansen, who previously worked on Deus Ex: Human Revolution and some of the Tomb Raider games. Sjors is looking to create something completely different from his previous projects in AnimalAlbum. Some of the features of the game according to Sjors include: 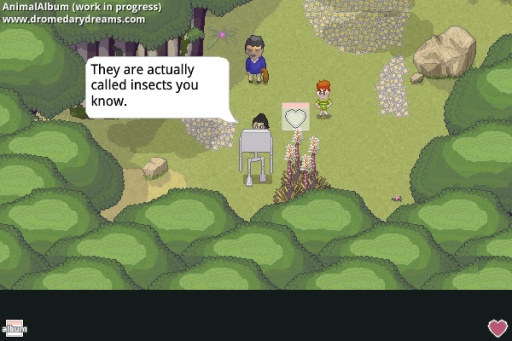 Sjors has a few goals with this game: he wants people to take more interest in the creatures of the world, and he wants to make a laid-back game that “tries to be kind and lets you do your thing.” Part of his motivation in making this game was a “letter printed in Science magazine by a group of conservationists who were basically surprised to find that kids knew more Pokémon than actual real animals, calling out to the community to take heed of that.” He hopes that AnimalAlbum will be a contributor to making video games useful on a larger scale.

I really love the concept of this game; I think it will be able to be enjoyed by everyone, not just parents and children, but also animal lovers and scientists. Study after study has shown the benefits of gamification, and . Also, I LOVE that robot!

One thought on “AnimalAlbum – An Educational, Pokémon-Like Game”