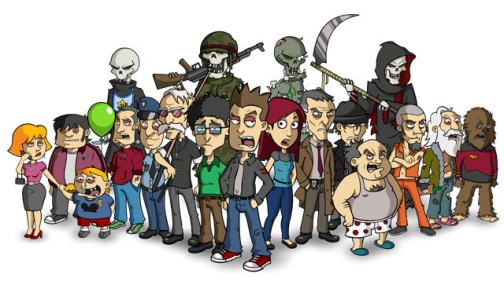 Randal’s Monday is an upcoming adventure game from German publisher Daedalic Studios (a favorite of mine) and Spanish developer Nexus Game Studios. The game will center around geek and pop culture references from the 1990s and early 2000s – my childhood years! – and is a point-and-click adventure. Appropriately, this style of game peaked during the time period it’s making reference to. Randal is described as a kleptomaniac, a sociopath, and an awful friend, which probably puts him squarely in the category of anti-hero. Here’s the plot:

After his friend Matt’s engagement party, waking up on a Monday morning with a massive hangover, Randal finds Matt’s wallet in his pocket. Inside the wallet, the precious engagement ring. It doesn’t take Randal long to sell the ring – triggering a fatal curse. Matt commits suicide, and Randal is now supposed to live through the same fateful Monday again and again, doing whatever is needed in order to fix the horrible situation. Randal must recover the one ring and his life, before the situation worsens…or the universe collapses.

The game definitely seems to be on the darker side, the cursed diamond ring reminds me of Curse of Monkey Island, and living through the same day over and over is a device I’m interested to see in a video game, as we’ve seen it in movies and TV countless times – Groundhog Day, Buffy, and Supernatural, to name a few. Randal’s Monday features seven chapters, more than forty different environments, more than fifty characters, and even a few zombies.