[Review] The Legend of Zelda: A Link Between Worlds (3DS)

By JoypadJess December 19, 2013 allahweh Nerdy But Flirty Nintendo Nintendo 3DS Review the legend of zelda a link between worlds 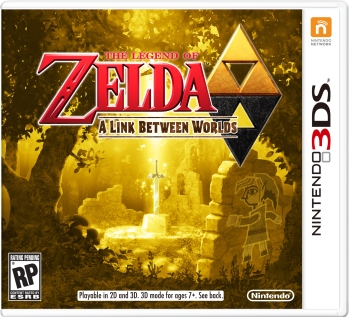 Those of you that know me know that the Zelda franchise is one of my all-time favorites. Indeed, when I was a little girl I was super-excited when my parents brought home the original Legend of Zelda for the NES. I loved that game and the free-roaming nature it provided. So many games back in those days were very linear and didn’t offer you much in the way of exploration or flexibility, but this gem allowed you to explore a vast land filled with hidden dangers and lucrative treasures, and despite how much time has passed, even that game is a blast to play.

But, more important to this review is the fact that The Legend of Zelda: A Link to the Past is one of my favorite games of all time from the series. I got the game as a gift for Christmas in 1991 and loved how much it built upon the conventions of the series. Many argue that Ocarina of Time is the game that added the most to the series in terms of vast departures and technological upgrades, and while this could be true, I believe that ALttP added a great deal as well. It’s a game I still fondly remember and like to dust off the SNES now and then to play.

To be quite honest, The Legend of Zelda: A Link Between Worlds was the reason I finally decided that I wanted a 3DS. For the longest time, there wasn’t really anything on the platform that interested me. There was a new 3D Mario game and a few others that looked decent, but this is the one game that finally pushed me over the edge to wanting the platform. So, with that being said, did it live up to my hopes and desires? 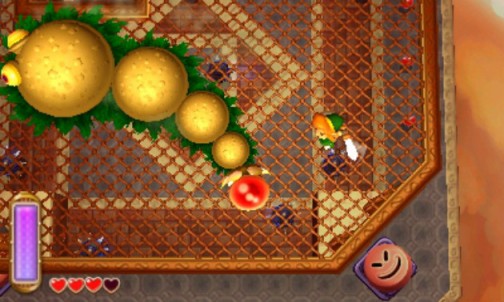 A Link Between Worlds is set in a landscape that will be very similar to anyone who has ever played A Link to the Past. Many generations have passed since the events of that fateful game, and Hyrule seems to once again be at peace. Players take the role of Link, a seemingly-orphaned young lad who is being apprenticed (and raised, to a degree) by a blacksmith family who reside just outside Kakariko Village. He meets an evil, crazy-looking individual named Yuga while trying to deliver a sword to the Royal Guard Captain at the Sanctuary. Yuga plans to abduct the descendants of the Seven Sages (by sealing them away in paintings with his magical power) and use them to unseal an ancient evil for as-yet unknown reasons. These events certainly echo of things that happened long ago, and thrust Link (and the player) on a quest that will seem both familiar and alien at the same time.

A lot of the game will seem familiar to those who have played the 1991 classic. For example, the dual-world aspect of the game is very much alive with this title, most of the treasures from the SNES game are present in this one, the graphics are quite similar in most places, and there are many familiar characters (or, to be more accurate, descendants of the old cast) and locations – but many new ones as well. However (minor spoiler warning!), familiarity does not mean that things are exactly the same. The other world visited in this title is called Lorule (yes, a play on Hyrule being pronounced “High Rule”), and despite some locations being similar (and the graphics being nearly identical), Lorule is not the Dark World seen in ALttP. It is a completely separate kingdom in a parallel universe, not unlike, perhaps, Termina.

The story in this game is quite good overall, but I did dislike how some of the past events referred to in the game are glossed over. This is partly due to how complicated the timeline is now, regardless of the fact that Hyrule Historia cleaned up most of it and tried to resolve any misconceptions. Backstory is provided in the game in the game’s introductory sequence, in stories told by Sahasrahla and other characters, and in paintings on display in the foyer of Hyrule Castle. Yet, the events told in the paintings seem to echo events told in the backstory of A Link to the Past, which in itself would make sense if it weren’t for the fact that some of these events have since been retconned. For example, the story talks about a great war fought in Hyrule for control of the Triforce, after which the Royal Family had the Triforce sent to the Sacred Realm. Ganondoft, a thief, found a way into this realm and took control of it, its own powers warping the darkness inside him and turning him into a powerful creature (referred to here as the Demon King). These parts of the story happened during the events of Ocarina of Time, and thusly in the timeline where Ganon succeeds in obtaining the Triforce for himself. The Sages, according to Historia, have no choice but to use their magic to seal the Triforce (and thus Ganon himself) away in the Sacred Realm where he can no longer affect Hyrule. This resulted in peace in years to come, but the Sacred Realm gets corrupted into the Dark World we see during ALttP. This is, of course, documented here on the Zelda Wiki. In this light, the story makes sense, but simple factual omissions like Ganon being sealed away with the Triforce makes the story a bit more ambiguous. The game’s backstory doesn’t mention Ganon until after the part of the sealing is mentioned, so even though that doesn’t directly conflict with the timeline itself (indeed, the order of events is simply hazy in this game’s story), it requires the player to draw the connections themselves if they actually care (like I do!). 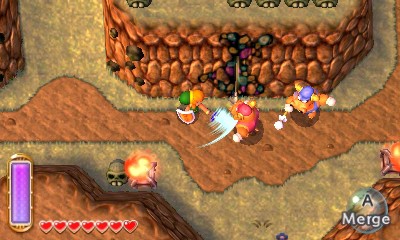 The game itself is very solid in terms of play style, controls, music, graphics, and, honestly, everything else. The main “gimmick” (which I use here in a good way!) in this game is Link’s accidental ability to become a two-dimensional painting who can merge into flat surfaces and thereby bypass obstacles (e.g. merge into a wall and go around a large, uncrossable chasm) and slip through small cracks in walls (which is important, because the gateways to Lorule appear as small cracks that you need to be able to slip into and out of). One major change that will be new to most people is the ability to rent and purchase almost all of the important treasures in the game. A merchant named Ravio sets up shop in Link’s home early on in the game and offers you items that you can rent for low prices (usually 100-200 rupees each). These items are yours to keep until the event of your death, at which time they revert back to his possession. Money in the game seems fairly easy to raise, so the industrious player will most likely rent (and, later, potentially buy) all available items so that they don’t have to keep going back to the shop for more. However, this brings up an interesting point: a good player will likely be able to go through a lot (or all) of the game without ever being completely defeated. Also, upon your defeat, you could simply load your saved game rather than continue and therefore not actually ever lose the items. This means that you could avoid ever having to spend 800-1,000 rupees for the items.

The game is filled with many side quests to complete and mini-games to take part in. Most of these are optional and simply yield rewards such as extra rupees, heart pieces, or special items like bottles (allowing you to hold more potions or fairies with you). One neat thing in the game is that the land is filled with special mini-dungeons that contain rupee treasures. The game even has treasure hunting NPCs who will give you advice on how to succeed. However, these seem to be a challenge of skill more than anything else, and most of them yield fairly small rewards (100 rupees or, very rarely, 300 rupees). Since the drop rate seems pretty high from most enemies, you could raise 100 rupees in just a couple minutes in Lorule killing enemies, so completion of these challenges will mainly be for the self-satisfaction of getting them done.

All-in-all, The Legend of Zelda: A Link Between Worlds is a very solid experience – one that will be fun for “old” fans of the series and those who are brand-new to it!

One thought on “[Review] The Legend of Zelda: A Link Between Worlds (3DS)”