The Search For Rachel and Thomas: The Star Wars Cattle Call Debacle

Disney announces that they’re looking for a pair of unknowns for the leads in Star Wars: Episode VII, and what do you get? Chaos. Pure and utter chaos. I know because I went to the Chicago cattle call on the 14th, and stood in a line that partially resembled a sidewinder and half the friggin’ Jörmungandr itself — the Norse serpent that’s so long it loops around the world and consumes its own tail. 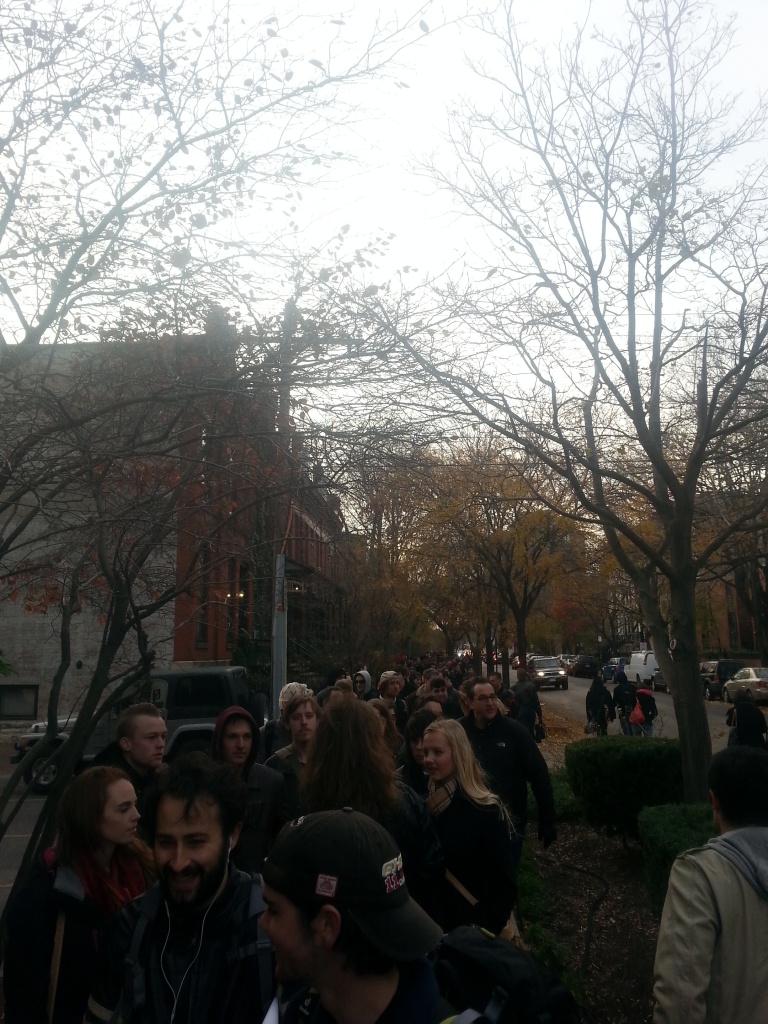 I’m not kidding about the Midgard serpent crack. The line easily spanned over seven blocks. We had to use GPS to gauge how far the audition rendezvous was, and to determine how many hours it would take us to shuffle there in uniform.

First, there’s the fun kind of chaos: young adults in their fanboy/girl finest, all brought together on a chilly November day, standing in line and chatting about their fandoms and hopes for the future. I made an amusing temporary friend or two, drank coffee like it was ambrosia, and learned a couple things about the expanded universe.

But then there was the bad chaos. The chaos that, unfortunately, seemed to snowball into a GenY shitfest.

Now, you may have noticed that I’ve been MIA on the good ol’ NBF for a few weeks (or, you haven’t…which is legit), but this is mainly due to the fact that I was assaulted at the very beginning of the month and needed some processing/recovery time. This is important information for you to know if you’re going to understand the impact of the following.

As I was saying, the line was long, and it was smack-dab in the middle of November. So, despite the start time of 3:00pm, the daylight left swiftly – and so did the patience of many teens and twenty-somethings.

Here’s the deal. Star Wars auditions and other large nerd gatherings that go into the night – like, say, conventions – can be super fun. But they’re also a safety nightmare. Because shitty treatment and behavior, once it ignites, spreads across a mob like wildfire.

Once it became apparent that the lot of us who had been waiting over four hours were most likely not going to get seen, probably about five blocks worth of people decided that it was time to cut the line near the front, which was the beginning of an “I dont give a single solitary fuck about anyone except myself” mentality. Of course, a third of the crowd starts knocking back PBR and rolling up some sweet ganja because, apparently, standing in a line is hard.

Normally I don’t have a problem with cheap beer and a relaxing joint, but in this situation, if there was anything that signaled to the masses that it was time to shove each other and become raucous, irreverent d-bags, that was certainly the starter’s pistol. Thus, we got compressed into more of a fat square than a line, and people were shoving and pressing up against each other to the point that I was looking around and realizing that I really didn’t want the men who were pressing up against me to be pressing up against me. Especially since one was making a point of touching me. I also didn’t appreciate their jokes about how easy it was to grope girls, or the endless stream of blowjob jokes.

Obviously, I’m not saying that every guy in line was a greasy jerk-face, and perhaps even some of the guys who were behaving that way didn’t know how goddamn uncomfortable they were making other people (which in some ways is worse). But this should be the general rule of thumb:

Are there women in close proximity to you whom you don’t know? Don’t touch them. Don’t make jokes about touching them. If you’re physically pressed into touching them, apologize. If you don’t want to feel like women are thinking you’re a creepo, don’t give them a reason to form those thoughts. The problem is that we women, in this social climate, pretty much have to assume that any strange man has a motive to violate us and hurt us. You may think that’s ridiculous, but a random strange man beat me in the face on the street with zero provocation. And he looked like a normal guy, no stupid prejudiced stereotypes attached. Just a medium-sized white guy with brown hair.

That, and worse, happens to women all over the world every day and night. We have great need and reason to be protective of our personal space when strange men are involved. So if you don’t want to be lumped in with the men who are abusers out there, be respectful of a girl’s space. Know that she wants to trust you, but she can’t, and you just have to accept that. Accept it, and if you want to work on the trust thing, do something that helps her feel a little bit safer.

Like the friendly father that, despite his face tattoo, really wanted to make me feel better, so he wrapped me in a blanket and kept an eye on me (from a respectful distance) when the line went to Hell in a hand basket.

And to the sneering white kids from the ‘burbs who decided that the plain afghan he gave me was a “poncho,” and were pretending that his light accent was inscrutable, I will tell you again that, despite your progressive hipster clothing, you are complete and utter racist garbage. Only this time, I’ll say it in front of the entire internet.

Don’t go to these things alone. I know a lot of us are tough-ass bitches who don’t need no protection, but in mob situations, you don’t want to get caught by yourself. Really. And if guys start getting pressed up in your business, you need to fight to give yourself a bigger radius for your space. Personally, I like to drift to the outer limits of the line (or in the case of the Star Wars casting call, climb up along a fence) and spread out my elbows and legs to increase my surface area and deter impromptu juking.

Don’t feel discouraged to verbalize when you’re uncomfortable with certain behavior, but be careful to keep your cool. I don’t say that with the implication that I think anger is unwarranted or unbecoming or some bullshit like that, but I say it because if you attack, you can bet that the offender is going to attack right back. And they might decide that it’s time to take it to the physical level. Not everyone sucks, and there are plenty of people who will stop being disrespectful when asked. But the shitty ones are always out there, so, unfortunately, we have to keep our guard up — especially if the event security is pulled from the line like it was at the Star Wars Chicago casting call, which was easily the most unacceptable part of the entire evening. So, Disney you want new, sweet-faced debutantes to star in your movies? Well, don’t leave them alone to be violated in the dark.

Now, the Star Wars information you’ve been waiting for:

So, you know that Rachel character they were holding these casting calls for? That mysterious lead role? She’s definitely going to be a small brunette. And the girls I saw get pulled for a callback definitely shared some physical features with Carrie Fisher. Just sayin’.

2 thoughts on “The Search For Rachel and Thomas: The Star Wars Cattle Call Debacle”