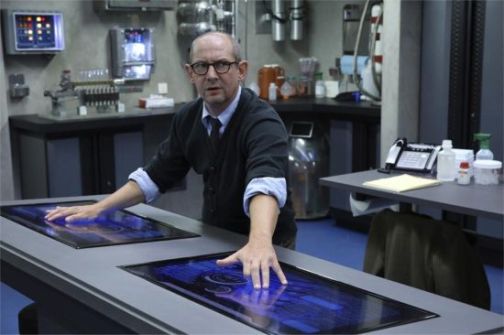 The third episode of Agents of S.H.I.E.L.D. starts out with some crazy car and semi-tossing action, along with a kidnapping. It (along with some stuff we see later) makes me think that the show has a higher special effects budget than the average new television show. After this episode, it’s clear that Skye is supposed to be the audience proxy, the one we identify with. She cracks jokes about how S.H.I.E.L.D. operates and asks questions that the audience might be asking. There’s a great sequence where she goes undercover at a party to get information on the kidnapper, and the rest of the team is feeding her information on a headset.

The episode dragged a bit at the beginning, put picked up fairly quickly by the second act. I also really liked that we are getting some different perspectives on S.H.I.E.L.D. and what they do; not everyone thinks they are 100% good guys. Also, there is an AWESOME special effects sequence at the end that pays homage to a certain movie. We get another hint that something isn’t quite right with Coulson toward the end. I discovered today that there is already a ship name for the Sky/Ward hookup I predicted – and it’s Skyward, which is awesome. I’m definitely thinking sooner rather than later. The show adds a “Marvel’s Agents of S.H.I.E.L.D. will return in a moment,” card/voiceover to really make sure you stay for the tag. It’s not as awesome as last week’s cameo, but it does foreshadow…something. I’m not sure what. Another excellent episode!

New episodes air on ABC on Tuesdays at 8pm EST.