You are Ricky Fox, a brilliant detective from NYPD. Your best friend, Arthur Petrovski, a renowned psychiatrist, just passed away in strange circumstances and you travel there to make your own investigation. Freshly arrived in Greenhearth, a small rural town in Oregon, you meet a strange bunch of weird characters, and you realize that the town is full of secrets. Will you find the murderer?

Ricky lives in his head a lot, and the characters are mostly stock (which works for noir, so I won’t argue too much). Everyone is hiding something, and you need to figure out what to solve the mystery. It’s a little obtuse, perhaps because of the translation, and I was often questioning characters’ motivations. It’s a little difficult to keep everyone’s secrets and motivations straight in your head. 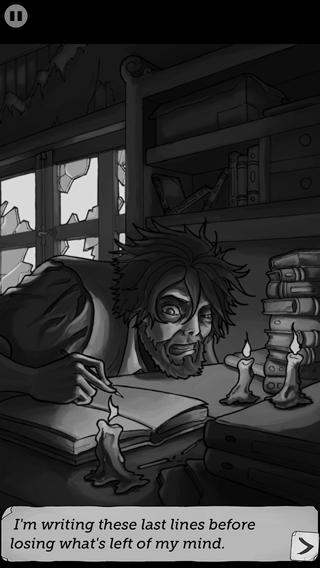 The music in the game is beautiful. The composer, Charles H. Martin, manages to create something that is both pleasant to listen to and vaguely unsettling, using only a grand piano. This music is the only sound you will hear in the game, so it gets a little repetitive.
Graphics are nicely-drawn. The entire thing is in black-and-white (save two flashes of color that I remember), contributing to the noir feel. Characters sometimes change appearance as you make progress through the game, looking more stressed or having a different expression, but for the most part, the look stays the same throughout. 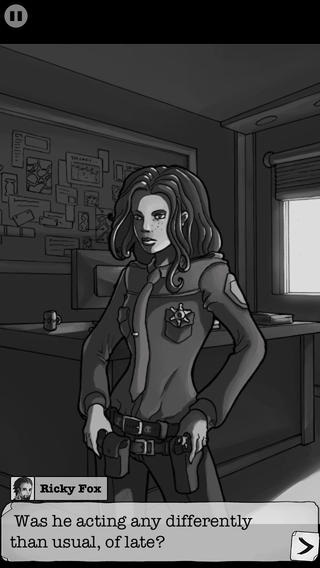 Gameplay is where Echoes falls apart. I was unable to finish the game at all, because I got caught in an endless loop of having no more clues to be found and being made to start over, which only brings you back to right before you rest. The game is also bad at giving you direction – I am not sure if this is a result of translation or what. Often, a character would tell me to check in with another character, but that character would have nothing new to tell me. Also, after I experienced getting to Day 4, every time I slept after that, the night-time sequence that leads into day four kept repeating, which was really annoying. It also sometimes randomly puts a new clue in a place where you already searched, with no direction or clue that you should check there again.
The interface is bothersome. Once you have a lot of people to talk to, it takes forever for all of the options to fly up to fill your screen. Additionally, there is one key character who will not talk to you at most times, and you have to get a certain character to tell you where he is (which she won’t always do), which becomes frustrating.
The game is advertised as being “a brand new adventure each time – the clues, the behavior of the characters, and the story possibilities are different each time you start a new game.” I was too frustrated by my first truncated experience to see if this was true or not, but it is an interesting concept. I wonder if the particular path I was dealt had a bug in it. I may try it again later after the bad taste wears off.

This game had a lot of potential, and I really wanted to like it, but translation errors and not enough direction really hampered the experience for me.
Score: D
Get the game here and check out the official site here.
[Disclaimer: A review code was provided for me to review this game.]