In a message from the creator on his blog, Mom vs. Bad, he writes, “Mom vs. Bad started as a project to help my mother stay positive while going through some transfusions related to lymphoma. Six months later, she is cancer free and doing well!” He started the blog to lift his mother’s spirits: “I launched this blog and started curating stories from all over the world that detail mothers doing heroic things. From saving puppies, to stopping would-be predators, to battling cancer…any story that showed a mom doing good I wanted (and still want) to share.” His mother had recently gotten an iPhone, and he wanted to create an app that was easy to figure out and gave positive messages as you played. He says, “The way I see it, there is nothing wrong with being told you’re doing a good job and that you are appreciated. If this little game can bring a smile to someone’s face who needs it…then it is all worth it!” I’ll be reviewing the new version of the game in the app store, Mom vs. Bad Pro, which provides some requested updates from fans of the game: more abilities, harder levels, and more control over the action. These were added with the intent of not overcomplicating the core concept, and the designer is open to communication with fans of the game via Facebook and Twitter. Prior to this new release, the original app was downloaded more than 15,000 times.

Watch the launch trailer for Mom vs. Bad Pro: 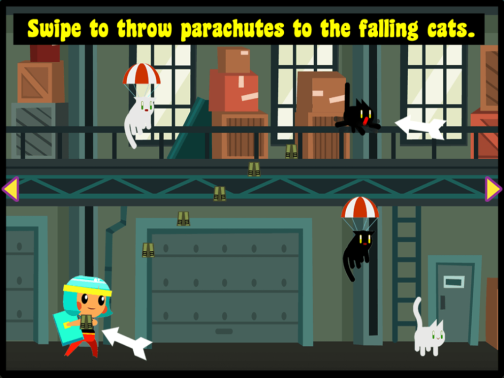 When the kids aren’t around, Mom is saving animals in need with the help of her bottomless pocketbook (moms always have everything you need in their purse, right?!), which in this case holds an infinite number of parachutes. Cats, dogs, raccoons, and penguins are falling from the sky, and you’re the only one who can help! 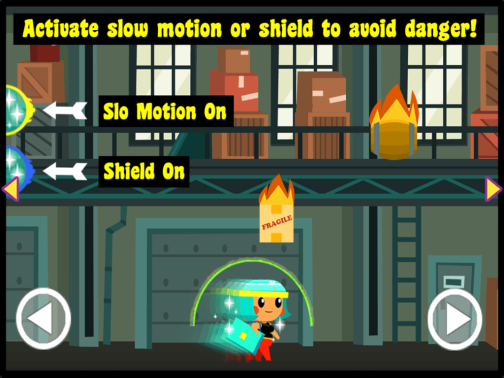 Mom vs. Bad is ADORABLE. Mom herself is cute and hip, with bright blue hair and big earrings. The animals are extremely cute, which makes you want to save them even more. The backgrounds of the worlds are varied and colorful – they kind of remind me of the backgrounds in The Powerpuff Girls. Sound mostly consists of generic music and the sounds the animals make, but a nice touch is kids voices saying encouraging things throughout the level, like “You can do it!” and they congratulate you at the end of a level for doing a good job.

Straight from the creator: “Mom vs. Bad was designed to be an easy game anyone can play that puts mom right in the forefront as the hero!” Gameplay is indeed simple – you either flick or drag parachutes to falling animals, who will then escape safely (but if you miss, don’t worry…all the animals land on their feet). Dragging is more precise; I quickly learned that flicking can be a little haphazard. Along with the falling animals, there are falling obstacles that Mom needs to avoid. She can do that with her two powerups: slow time and shield. Slow time gives you special purple parachutes, which you can gain more of by hitting dragonflies with your parachutes. Shields can be recharged by rescuing the penguins. You are given three coins at the start of a level. You lose coins if you get hit with a falling obstacle, if you fail to throw a parachute to an animal, or if you hit an obstacle with your parachute. If you lose all three coins, you have to retry the level. I didn’t have much difficulty getting through, but there are some levels where the animals and obstacles are flying fast and furious, which makes it a little tougher. I can absolutely see this game being a huge hit for parents and kids to play together, with parents sneaking in some play time on their own, and even as someone in her twenties, I spent a good amount of time rescuing adorable animals.

There are a few in-app purchases, but I never felt compelled or forced to buy any of them and could progress unimpeded without ever looking in the store.

I really love the Mom vs. Bad game (and project as a whole) and the message it’s sending. If you want a cute, casual game with an awesome everyday heroine, pick up Mom vs. Bad today!

You can get Mom vs Bad PRO for iOS in the app store for $1.99; there is also a free version! It’s compatible with iPhone, iPod touch, and iPad. It requires iOS 4.3 or later and is optimized for iPhone 5. You can also get it for Android in the Google Play store in both the free and pro versions, which requires Android 2.2 and up. Check out the official site, like them on Facebook, follow them on Twitter, and subscribe to them on YouTube.

Here’s some moms endorsing the game!