For the end of Women’s History Month, I wanted to spotlight some upcoming women video game characters. This year, we’ve already met The Adventurer, The Time Traveler, The Scientist, and one of The Twins from The Cave; Elizabeth from Bioshock Infinite (our review is coming soon!); the many ladies of Resident Evil 6; and been reunited with Lara Croft in Tomb Raider, Sarah Kerrigan in Starcraft II: Heart of the Storm, and Ellie Langford in Dead Space 3, just to name a few. Now, let’s look at some women who will be starring in upcoming games! 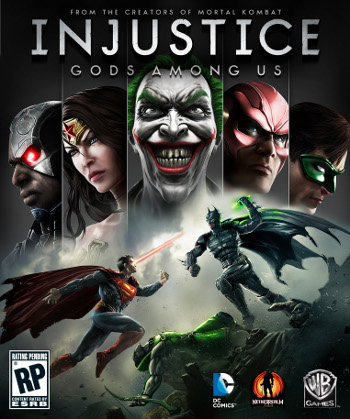 Injustice: Gods Among Us is an upcoming fighting game set in the DC Comics universe. Most of these ladies need no introduction. The game will have a story mode split into several chapters that will also incorporate minigames, along with standard versus and online matches. The basic plot is this:

“Superman establishes a new world order after the Joker destroys Metropolis and tricks the Man of Steel into killing Lois Lane and their unborn child. A battle ensues between the forces of Superman’s regime and those allied with Batman’s insurgency.”

Fuse is a four-player, third-person cooperative action game. The game was formerly known as Overstrike, and has been in development since 2010. Plot:

“The game is set in the near future and follows a team of four misfit agents collectively known as Overstrike 9, who infiltrate enemy strongholds using fringe-tech gadgets and lethal teamwork. The members of the team are Dalton Brooks, a reformed and sarcastic mercenary, equipped with an energy shield; Naya Deveraux, a mischievous, lifelong thief, equipped with a cloak device; Isabelle “Izzy” Sinclair, a gifted, but rebellious young scientist, equipped with a mass bubble gun; and Jacob Kimble, a decorated detective with a bit of a temper, equipped with an electric crossbow. The plot follows these agents as they attempt to stop a shadowy organization which threatens to wipe out humankind. Due to each agent’s unique talents and a tendency to completely ignore protocol, Overstrike 9 is the only option left.”

Naya is voiced by Jennifer Hale (FemShep! And many, many other famous lady characters), and Izzy is voiced by Ali Hillis (Liara! and Lightning from Final Fantasy XIII). Fuse will release on May 28 for PS3 and Xbox 360.

No, I’m not making Squirrel Girl up. Marvel Heroes is going to be an MMORPG with similar play to the first two Diablo games. The plot:

“The Cosmic Cube is a device of untold power capable of changing the very fabric of reality at the whim of its possessor. The brilliant but malevolent Dr. Doom has the Cube, and with it, he aims to reshape the world in his own image. Determined to succeed where the Cube’s previous wielders have failed, Doom has lined up villainous allies to prevent the superheroes from interfering. Can you unravel Doctor Doom’s sinister plan and stop him before it’s too late?”

Only some of the playable characters have been announced, so we might see even more comic book ladies in the game. Marvel Heroes will release on June 4 for Windows and OS X.

Brief sidebar while I’m talking about Marvel: Deadpool (out Summer 2013) will feature Psylocke, and Lego Marvel Superheroes (out Q3/Q4 2013) will let you play as a ton of the Marvel Comics ladies.

Nilin from Remember Me

Nilin is the main, player-controlled character in the game, which is still pretty unusual. Remember Me is going to have diverse gameplay, including exploration, platforming, stealth, and melee combat. It’s also going to introduce a concept called “memory remixing,” which allows Nilin to rearrange someone’s memories for her own benefit. You will also get to create your own combat combos. The plot is as follows:

“The player controls Nilin, an amnesiac “memory hunter,” through the streets of Neo-Paris in the year 2084. This dystopian future features a surveillance state. Nilin’s former employer, Memorize, erases her memories to neutralize her and she must discover why and how to restore them.”

Ellie from The Last of Us

We’ve talked about The Last of Us before, with a specific spotlight on Ellie, so I’ll make this one brief. The Last of Us is a third-person survival action game. The player controls Joel and the AI controls Ellie, who Joel has been tasked with protecting from infected, scavengers, and the military. The Last of Us will release on June 14 for PS3.

Broken Sword: The Serpent’s Curse is the fifth game in the Broken Sword point-and-click adventure series. It was funded on Kickstarter, and raised over $823,000 (including Paypal donations). Nico, a French photojournalist, has been a main character throughout the entire series and a playable character for all but the first game. The plot of the fifth game is as follows:

“The player guides protagonists George Stobbart and Nicole “Nico” Collard, who at the beginning of the game meet by chance at a Parisian art gallery, where they witness a man disguised as a pizza courier murdering another man and stealing a seemingly worthless painting. This will take George and Nico across Europe on the trail of a conspiracy regarding the Gnostic Gospels – a conspiracy whose roots lie much deeper. George and Nico then get thrown in an investigation and travel to various locations, with Paris, London and a Middle Eastern location (Turkey) confirmed.”

Jodie Holmes from Beyond: Two Souls

Beyond: Two Souls is the latest game from Quantic Dream, creators of Indigo Prophecy and Heavy Rain. Ellen Page portrays Jodie. According to Ellen, the script for the game was over two thousand pages long. The game is going to explore “psychological, spiritual and thriller elements and focuses on what will happen after death.” Jodie is able to communicate with a spirit/supernatural being named Aiden. You will control Jodie through fifteen years of her life while she searches for answers regarding Aiden. Beyond: Two Souls will release on October 8 for PS3 and PS4.

Lightning Returns: Final Fantasy XIII is part of the Fabula Nova Crystallis series and will be a sequel to Final Fantasy XIII-2, ending the XIII arc. The game will be “world driven” (think Skyrim – events will occur in the world even if you aren’t around to see them). Lightning is the only playable character, and the game takes place over thirteen days. There will also be choices that affect the game, making it so that you can’t experience everything in only one playthrough. The battle system is ATB-based, but modified to allow for a single fighter.

Lightning Returns: Final Fantasy XIII will release in the third quarter for Xbox 360 and PS3.

Who’d I miss? Let me know in the comments!