The Cave is the latest offering from Tim Schafer’s Double Fine Productions, the company that brought us Psychonauts, Brütal Legend, Costume Quest, Stacking, Iron Brigade, Sesame Street: Once Upon a Monster, Double Fine Happy Action Theater, Middle Manager of Justice, and Kinect Party. They are also currently working on their as-yet untitled Double Fine Adventure, which set a Kickstarter record. The Cave was was directed primarily by Ron Gilbert, while Tim Schafer served as Creative Director. If you’re a fan of LucasArts adventure games, you most certainly know these two from their work on Maniac Mansion, Zak McKraken and the Alien Mindbenders, the first two Monkey Island games, Day of the Tentacle, Full Throttle, and Grim Fandango. As a great lover of the LucasArts adventure games, I was excited for The Cave from the moment I first read about it.

The Cave begins with narration from the titular cave, and eventually the camera pans down onto eight people: The Knight, The Hillbilly, The Monk, The Time Traveler, The Scientist, The Adventurer, and The Twins. You select three of them to enter the cave, and once you pick them, you cannot exit or pick new people until the next game. Each of them have their own special ability, and each combination can be used to complete the game. From there, the cave guides you through itself with snarky comments, and you discover that the reason your characters are here is to retrieve their heart’s desire from within the cave.

This game is gorgeous. I played it on Xbox, and I could have stared at it all day. Which was good, because I got stuck a lot. The characters are drawn in a cartoonish way, but the environments are extremely detailed and beautifully drawn. It also has more variety than I was expecting – a lot of time is definitely spent within the cave, but it’s got surprises in store.

None of the musical themes stood out much to me, but the voice of the cave (which is the main voice you will hear) is fantastic. He’s really sarcastic and has a sinister undertone to his voice that I found really effective. The characters you guide through the cave are non-voiced, but the characters you come across inside the cave will speak to you, and all of that voice acting was great (something to be expected from Double Fine). The only sound issue I had was with The Time Traveler’s boots – the whirring sound they make came to grate on my nerves so much that I wouldn’t control her unless I absolutely had to. 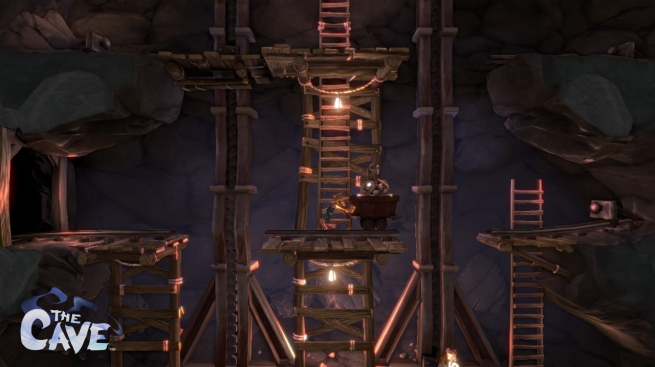 One of the puzzles I hated most.

The Cave is primarily a platformer, with elements of adventure games (puzzles, a kind-of inventory system, wacky cast of characters) mixed in. You also collect memories from your three characters pertaining to why they find themselves in the cave as you descend. From the beginning, you’re not given any instruction, which is kind of refreshing – no tutorial! If you need help, there’s a help section in the menu, but it’s non-intrusive. I liked this aspect of it. However, when it came to the puzzles and actually playing the game, I had some issues.

There is a LOT of backtracking in this game. You’ll be running over a small section for quite a bit before you can move onto the next small section (in one game, you will go through nine small sections). The worst offender of this was a puzzle involving returning three mine carts to a very ticked-off miner. At this point, you’ve just climbed many, many probable miles down into the cave, using ladders and ropes. Once you find the miner, you have to climb all the way back up to three landings you probably skipped over while you were climbing down. It felt like it took forever, and the puzzles once I got to the landings weren’t very fun to do either.

There were some fun parts, don’t get me wrong. On my playthrough, I picked The Adventurer, The Time Traveler, and The Twins. The Twins probably had my favorite section of the cave, an old Victorian mansion. The Time Traveler gets to use a time machine, and her section involves switching between the past, present, and future, which was cool. I did have to use a walkthrough a lot, which I don’t like to do, but it beat how frustrated I was getting with the game otherwise.

I could have completely done without The Adventurer’s section too…which is a shame, as she’s an Egyptologist, which is something I wanted to do, and I really love ancient Egyptian imagery. Actually, if they had taken out the timing section, I would have been happy. I absolutely cannot stand timed puzzles – but if you do, you’ll probably enjoy her section of the cave. Dying has no consequence, something you find out early. If you take too great a fall, you dissolve into a ghost and then revive. This is much appreciated…I fell a lot. I get cocky.

With all those negatives, let me mention some good things. I absolutely love the humor. It’s dry and witty and has a lot of dark overtones, which all combine into some of my favorite humor. It’s what’s going to drive me to come back and play the game again. I also really appreciated the references to other games that Ron Gilbert and Tim Schafer had worked on. Some things I noticed (there are probably more):

I didn’t get to try the co-op, but I suspect gameplay might be easier with someone to bounce ideas off of. I haven’t decided how I feel about the ending yet (and I’d like to see some different endings before I make a final call), but it seems to be a bit anticlimactic. However, the game does make you think about human nature and greed, even if only a little bit. There’s nothing after the credits, so don’t wait around.

The end of the puzzle I hated second-most.

I’m really conflicted about The Cave. The humor is fantastic, but the amount of backtracking and confusion really brought the experience down for me. I wish this had been more of a traditional adventure game with platforming elements and not the other way around. I still want to play it again, both with different characters and to get different endings. Just not for a while.

I’m going to go with a C+…but could maybe be talked into a B- based on the writing and humor.

The game has twenty-seven achievements, and it seems you have to play through the game a minimum of six times to get them all. Luckily for us achievement hunters, the game is fairly short – according to Raptr, it took me seven hours to complete. Depending on how much of a completionist you are, you might want to wait for the game to go on sale.

Let me know what you think of The Cave in the comments!

[Disclaimer: This game was purchased in order to review it.]

One thought on “The Cave Review”