Top Five Games to Get During the GOG Holiday Sale

GOG is my favorite digital distribution site and the only one I use! All of their games are DRM-free, and the community and support you get at GOG is awesome. Every year, they have an awesome holiday sale, and this year is no exception. Every game in their catalog (except for a few, listed below) is discounted, most for 50% off; there is a different bundled deal every day until the end of the sale on January 3rd; and, for the first two days of the sale, you can get Duke Nukem 3D: Atomic Edition for free!

Here are my suggestions for the top five games to get during the holiday sale.

I knew I forgot something…

Dungeon Keeper 2 puts you in charge of your very own dungeon, and your task is to destroy the forces of good forever and claim dominance over the land. DK2 was made by Bullfrog, which was founded by Peter Molyneux and Les Edgar (one of those names should be quite familiar if you keep up-to-date with your video game world hype). The game has a ton of great humor in it and doesn’t take itself very seriously – you’re conquering places like Smilesville – while still offering a challenge. It’s really fun to design your dungeon, and all the different minions you attract have interesting personalities. The narrator (your mentor) is simply fantastic – he’s sarcastic, but can be quite scary if he wants to be. 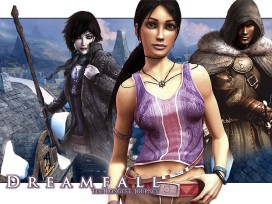 Sequel to The Longest Journey (which I haven’t yet played), Dreamfall is one of the most engaging games I have ever encountered. Set ten years after the first game, you begin as Zoë Castillo in Casablanca, 2219, narrating from a coma. The story absolutely compels you to keep going, and the two parallel worlds inhabited by the characters are so fascinating that you will want to explore everywhere. Conspiracies, talking crows, an adorable stuffed gorilla assistant, a creepy little girl, and lots of other crazy things come together to make an awesome game. I will admit that the fighting controls are a little annoying, but luckily they are such a small part of the game that it doesn’t matter. The soundtrack is gorgeous as well, and you get that when you purchase the game. Dreamfall is very story-driven, and it does end on a cliffhanger, but luckily a sequel was recently announced.

The above screenshot is how Fahrenheit (or Indigo Prophecy, in North America) starts out – you are Lucas Kane, and you have seemingly just murdered someone in a bathroom. Your first task is to hide the evidence, act casual, and get the hell out of the restaurant you’re in without causing suspicion. The game is played out in quick-time events, even when you have to make a dialogue choice (similar to The Walking Dead). There are two types of these – a Simon-type one where you follow the colored sequence, and a standard “choose dialogue while the timer runs out!” Throughout the game, you switch control between Lucas (trying to discover what made you kill that dude) and NYC police officers Carla and Tyler (investigating the murders). As the player, you have knowledge of everything that’s going on, making it hard to root for either side exclusively. Fahrenheit doesn’t have a health bar, but rather a sanity bar, and you have to keep your characters’ mental health up instead of their physical health (sometimes they are linked). This is another game with amazing music, and again, you get the soundtrack when you get the game on GOG. Disclaimer: quite a number of people absolutely detest the ending. I am not one of those people.

Yes, two games…so I guess this is technically a top six. But I can’t separate them! The Fallout games were my first exposure to the post-apocalyptic genre, which is now one of my favorites. Both games allow you to completely customize your character, and you can even get through most of the games without fighting at all if you want (which is how I like to play – it’s fun to talk your way out of (and into) everything!). In the first game, you are sent out of your vault to find a water chip, because your vault is going to run out of water in 150 days without one. Along the way, you encounter a bunch of companions who will help you along the way (including Dogmeat, the loyal mutt who keeps showing up in the Fallout series) and have to destroy a bunch of mutants who want to turn what’s left of humanity into super mutants. In Fallout 2, you are a descendant of your character from the first game, and are sent to find a G.E.C.K (Garden of Eden Creation Kit) for your tribe to prosper. Eventually, you’ll have to deal with the remnants of the United States government and save the world, again. Both Fallouts offer a huge amount of player choice and moral decision-making in addition to having excellent writing and stories. 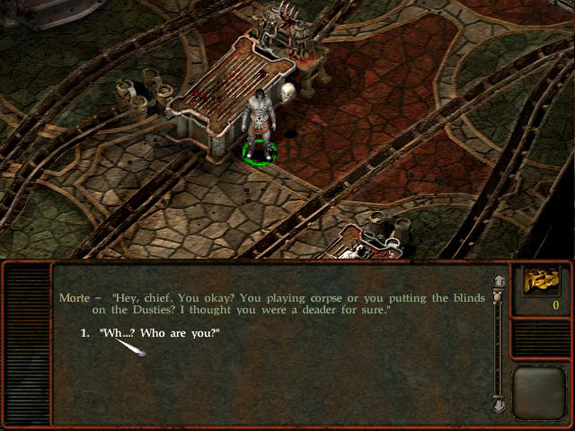 Planescape: Torment is the most well-written game I have ever played. It is set in the Planescape setting of Advanced Dungeons and Dragons, which means no dragons, few dungeons, and lots of multiverse exploration. You play as The Nameless One, a man who has absolutely no memory of his past and must discover who he is. This makes PST a lot different than 99% of RPGs. You don’t have a grand, world-saving quest. You just need to find out who you are. The companions you gather in the game range from a floating skull to a constantly-burning mage to a chaste succubus – and more! PST isn’t afraid to explore deep questions, and it doesn’t always have the answers. It’s definitely a game that makes you think. The game’s script is 800,000 words long – the focus is definitely on the story and not the combat. This game and its questions have stayed with me for a long time, and I cannot recommend it enough.

There are so many more awesome games I could suggest to you – my GOG shelf has nearly a hundred games on it! – so I encourage you to explore for yourself. Also, I haven’t played The Witcher yet, but it’s 75% off at $2.49, so you should probably snatch that up if you don’t have it! Honorable mentions: The 7th Guest, Stacking, Pharaoh + Cleopatra, and RollerCoaster Tycoon Deluxe.

The games that are not being offered for sale are either too new to the site to be on sale so soon or cannot be on sale due to “legal and licensing reasons” (the latter in the case of the Baldur’s Gate games). They are:

Also, according to a GOG staff member, Square Enix’s games are only on sale for one week, and Bohemia Interactive’s games and Retro City Rampage will only be on sale for two weeks.

If you’ve never been to GOG before, they offer ten free games right off the bat. A new game (or two) is released every Tuesday and Thursday, and there are sales every Wednesday and Friday. What are you waiting for?

What are you getting during the GOG sale? Let us know in the comments!