Review: XING: The Land Beyond

XING: The Land Beyond is a first-person, VR-compatible adventure game from White Lotus Interactive. It’s a non-combat, exploration-focused game that also features various puzzles that will need to be overcome.

XING (pronounced “Zing,” according to the developer) puts players in the role of a character as they enter the afterlife. Entering a realm somewhere between life and death, the player will help the Guardian free the spirits of those souls who are trapped and unable to fully move on. Along the way, they will find clues about themselves, hopefully discovering who they are and why they’re here. 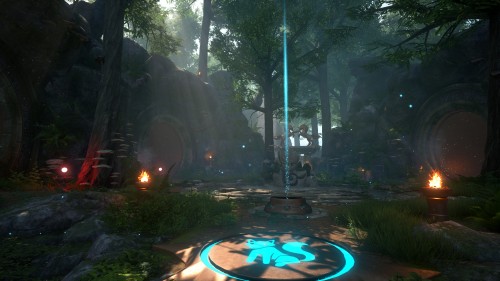 The journey begins with what seems to be your death, dropping you in a bright white space between realms. Venturing through the open door before you will take you to a hub area — a rocky, forested island floating high above the clouds. Here you’ll meet a guardian spirit who says it is the only true living entity in this realm and then sends you on your way. From here, you’ll venture to other realms that were once home to spirits who now need your help in setting them free. While you will be mostly on your own in these different areas, the spirits will guide you with cryptic clues and bits of wisdom and you’ll encounter their story told through pieces of scattered poetry.

In XING, the game is all about the journey, and it’s a journey you can enjoy at your own pace. There are no entities that are out to destroy you, and there isn’t anything that you’ll need to kill along the way. Also, since you’re already dead, death is no longer an obstacle. Even if you miss a precise jump that you need to make, you’ll simply phase out and reappear near where you failed, free to try again as many times as you need. This doesn’t mean that the game is easy, but what it does succeed in doing is taking away any sense of immediacy that might otherwise cause you stress. Rather than having to worry about reaching a certain goal within a set amount of time, you’ll instead be able to take your time seeing the sights, exploring every nook and cranny, and solving a few puzzles along the way. Exploration is certainly rewarded and is also highly enjoyable.

While I certainly do enjoy puzzle games, I do worry about games reaching a point where their puzzles become too cryptic and frustrating to solve. For me, it’s all about balance: I love having a solid level of difficulty when it comes to figuring things out, but I don’t want something to become so difficult as to be angering and off-putting. There’s always that “A-ha!” moment that should come with solving a particularly stumping situation and the hope is that the moment and feeling will pay off in the end. White Lotus Interactive seems to be very keen on my type of puzzling, because they ultimately have done a good job making them approachable while not holding your hand much along the way.

In the island realm, there’s a puzzle near the end of your journey that involves a deep canyon that needs to be crossed at various points that has a rotating mechanism at its center with clock hands serving as a metallic bridge. Various switch pedestals are at different spots around the canyon, and the key lies in using them to rotate the hands to certain positions. By itself, this would take a little bit of doing, but XING adds a deeper mechanic into the mix: some switches only affect the clock hands during the day, while others don’t take effect until nighttime. In order to get to certain locations, you’ll have to figure out which switches to activate for the day as well as the night and then make use of a special ability to change the time of day (which can only be done at certain locations). In short, you’ll have to mentally plan out your journey a couple steps ahead of time in order to take into account the positions the hands will be at during the day and the night, as well as where you will be when you can toggle the time of day. The final problem the game faces you with in this area is that the door you’ll need to open at the end can only be opened during the night.

If you haven’t guessed it yet, the aforementioned realm has a theme to it: time. In this case, the theme is presented through an ability to change between day and night — an ability you’ll have to master in order to solve problems and make your way around the island. Some platforms or objects will only appear during either day or night, and certain doors can also only be opened at certain times. The island’s final puzzle takes everything you’ve learned up until that point and combines it into a new challenge. Along the way, you learn the story of the spirit associated with the island and her journey through isolation and self-affirmation.

Each realm you visit contains a similar thematic approach. Along your journey, you’ll come to master time, the elements, and much more. All of these things will have to be harnessed to solve a variety of unique puzzles and explore mysterious, breathtaking worlds.

It’s apparent that White Lotus Interactive has taken a good deal of inspiration from the much-loved Myst series, and XING: The Land Beyond feels like a carefully-crafted love letter to the franchise. While XING may take some inspirations from Myst, it’s most certainly a worthy title in its own right. The story is extremely unique and equally as mysterious. The settings are breathtaking and beg to be explored. And the journey itself is one that will draw you in and keep you wanting more.

The game is aesthetically beautiful and yet it performs quite well. There are a variety of settings that you can toy with in the PC version to tailor the experience to your system’s specific capabilities. For me, playing the game at 4K, everything was beautiful and handled well. For a game of this nature, I find that ambiance and sound quality are just as important as visuals, and thankfully this game delivers, not just in the quality of its environmental sounds but also in its voice acting (narrated by the various spirits you’re trying to free) as well as its exceptional soundtrack. I sincerely hope the game’s OST is made available as a separate, reasonable purchase sometime in the near future.

My copy of XING is for the PC, and I have no doubt that the game will be a very positive experience on the PlayStation 4 as well. With the game being VR compatible, it should make for a fun, immersive journey for those who wish to play it that way.

In the end, XING: The Land Beyond is an exceptional, beautiful adventure game that will draw you in and stay with you for quite some time.

One thought on “Review: XING: The Land Beyond”