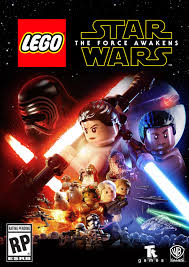 Lego games are so much fun! And playing The Force Awakens was very entertaining. It was also a nice touch that the actors voiced their Lego counterparts. It was awesome to play so many different characters, from Wicket to Rey. All the easter eggs are great fun to find, and if you play the DLC you find out other aspects about The Force Awakens, such as how Poe escaped Jakku.

This was the first game I’ve played where both Batman and Bruce Wayne played an integral part in the gameplay. I liked playing the Rocksteady games, but did not like the lack of Bruce Wayne. Depending on your choices, it was a 50/50 gameplay of both Bruce and Batman. Telltale did a great job in presenting how important Bruce Wayne is to Batman and vice versa. Can’t have one without the other.

The Uncharted series is one of my favorite video games series of all time. First of all, it’s beautifully animated and has top-notch voice acting. It was a great conclusion to Nathan Drake’s adventures. Some exciting news is that Chloe and Nadine are going to star in their own adventure! I’m not sure if it will be in DLC form or in their own game, but it’s nice to see the women of Uncharted getting a spotlight.

I enjoyed the Mass Effect trilogy a lot. From the previews, it looks awesome, and as long as I get to choose to play a woman character, I’ll be a happy camper. Glad to see that in the previews they’ve shown so far, Krogans and Turians are included in this new game. I can’t wait to see how previous Mass Effect decisions affect this game, if they affect them at all. Don’t let me down, Bioware.

For all of Nerdy but Flirty’s end of the year/GOTY 2016 coverage, click here!